Located just down the street from the state capitol building, this monument commemorates the Lewis and Clark Expedition, which passed what is now Jefferson City on June 4, 1804. It consists of five bronze statues depicting expedition leaders Meriwether Lewis and William Clark, Lewis' Newfoundland dog Seaman, Clark's African-American slave York, and George Drouillard, who was an interpreter, hunter and trapper. The monument is part of a plaza featuring interpretive panels describing the expedition and the Jefferson City Greenway, which is a multi-use trail that runs throughout the city. 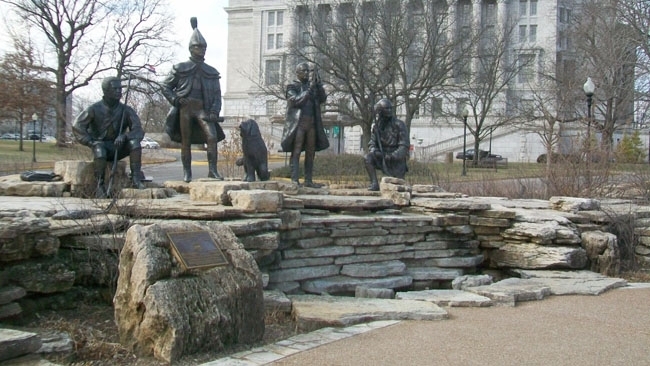 The expedition officially launched on May 4, 1804 from Camp Wood which was on the east side of the Mississippi River near present-day Wood River, Illinois. The crew consisted of around 40-45 men (and Seaman, who survived the whole journey) who traveled on a keelboat and smaller boats called pirogues. By the time they reached the Jefferson City area, the men had sailed for 22 days and covered 145 miles.

From June 1-3, they camped west of the city at a base of a hill called Clark's Hill, which, at the time, was located at the confluence of the Missouri and Osage Rivers. The top of a hill is a site called called Clark's Hill/Norton State Historic Site and features a trail, interpretive panels, and an overlook. It also preserves five Indian mounds, two of which Clark described in his journal (the other three were discovered later).

The lush landscape and wildlife in the area impressed the crew. The men admired the bluffs and noted the abundant oak, ash, walnut, hickory, mulberry and sugar maple trees. At the mouth of the Moreau River, Clark heard a bird that reminded him of a nightingale and named a nearby creek after it. The expedition departed on June 3 and sailed 17.5 miles up the river and camped near a tall, isolated rocky outcropping called Sugar Loaf Rock, which is difficult to reach and on private land. In 1804 the river was wider than it is today and reached the base of the rock.