The Cole County Courthouse in Jefferson City was built in the Romanesque Revival style, a popular form for Missouri courthouse buildings in the late nineteenth century. The structure was built as the third courthouse for the county, and the second in Jefferson City, after the county seat was moved here from Marion in the 1830s. The massive stone courthouse with a county jail was completed in 1897. The building was gutted by a fire in March 1918 that started in the central clock tower; the corner pavilions collapsed due to the damage. The first floor and basement remained intact, but new stone was required to rebuild the second story and higher. Rebuilding began in October 1918 by Louis Schell. Don't miss the bicentennial events the county has planned for 2020 - see below for info on whiskey and beer being made just for the occasion.

1972 photo of Cole County Courthouse by Holmes for NR Nomination 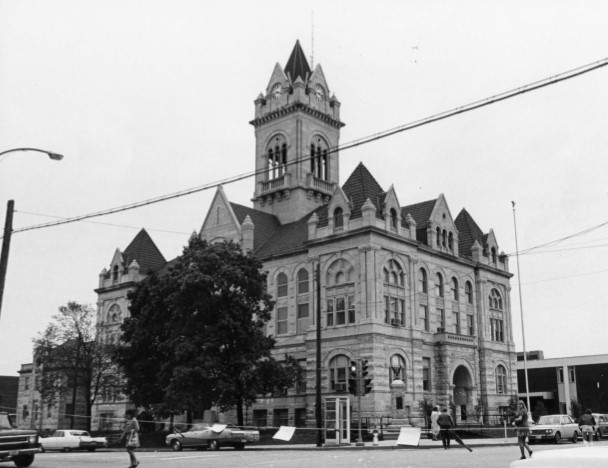 1972 photo, jail-sheriff's house front & left side of building; courthouse behind on right (Holmes) 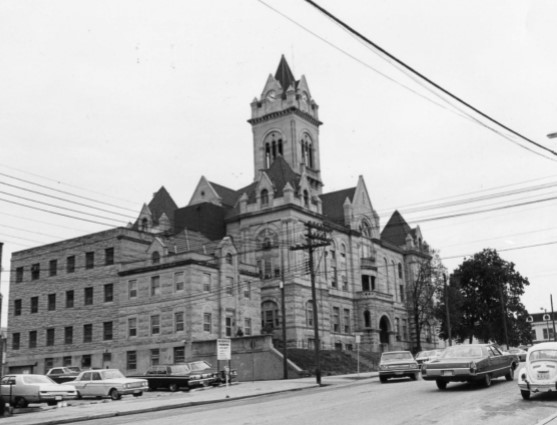 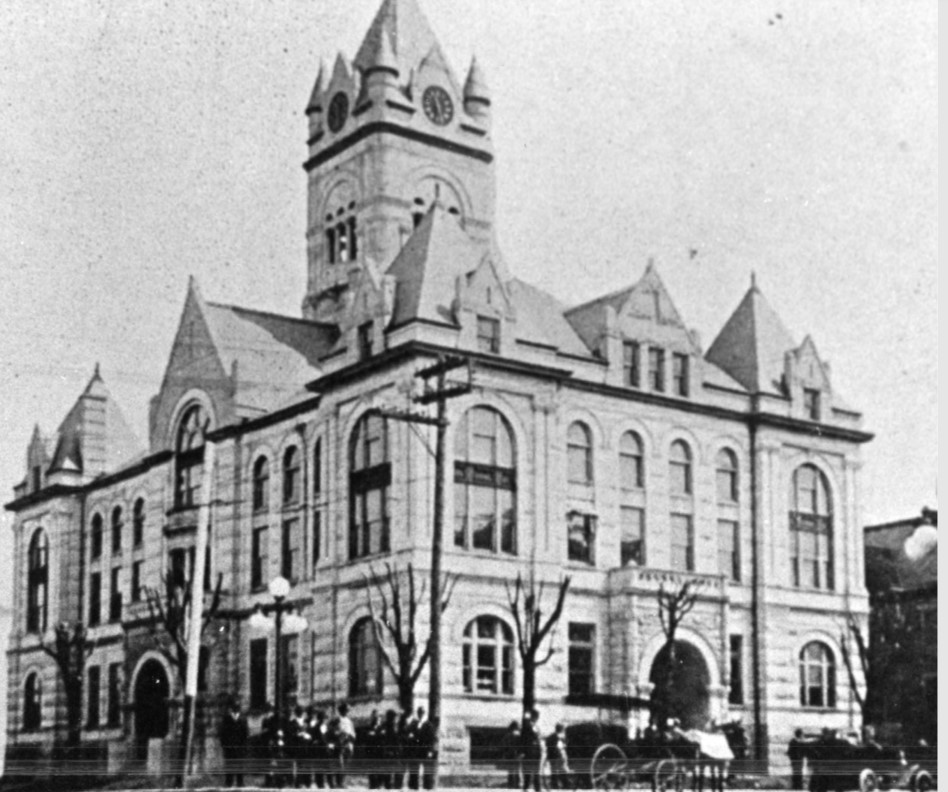 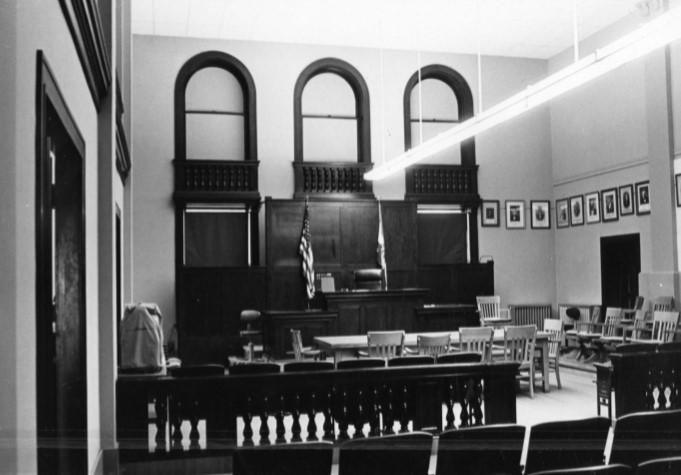 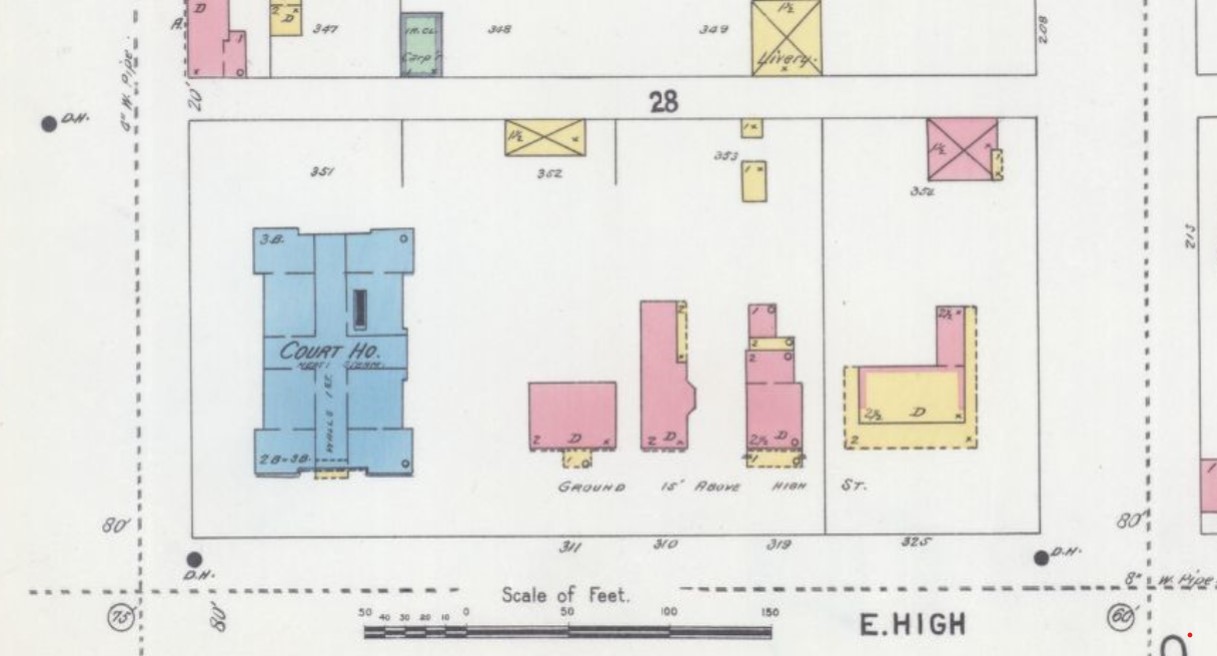 Henry Hobson Richardson contrived the Romanesque Revival style in the 1870s and 1880s, emphasizing a new combination of older elements: massive, round arches, steep roofs and turrets, and incised decorative stonework. The defining elements for this building are: stone construction; a rectangular plan; arched and flat-topped windows; a tall, centrally located clock tower rising above the roof; steeply-pitched wall dormers above the cornice on each façade; and a slightly projected central section on the main façade accented by projecting entrance porches.

This is the third courthouse for Cole, established as a county in 1820, with the capital at Marion. In 1829, plans were made to move the capitol to Jefferson City and sell the county buildings erected in Marion. The first county court held in Jefferson City was held in a log cabin near the present courthouse and a log jail house was built. The second county courthouse was a two-story stone structure on the corner of High and Monroe, facing Monroe, finished in 1836. The contract for this third county courthouse was made in 1896 and the building, designed by local architect Fred B. Miller, was completed by the following year.

The State Senate met within the Cole County Courthouse in 1911, after a fire damaged the State Capitol. Only seven years later, it was the Courthouse's turn to be ravaged by fire. Although the first floor and basement remained intact after the fire, with just water and smoke damage to be fixed, the second story and higher needed to be rebuilt with new stone. The 1896 design was essentially reused in the 1918 to 1919 rebuild.

Twelve other county courthouses in the Romanesque Revival style were still standing in Missouri in 1972 when the Cole County Courthouse was listed in the National Register of Historic Places. Cole's was the sixth county courthouse to be build in this style; a thirteenth in the state had been demolished by 1972. While the Sherriif and Jail, and many other county departments, have moved to modern buildings, the Cole County Circuit Court remains within the Courthouse.

Cole County is celebrating its bicentennial in 2020. President Monroe signed the Missouri Compromise in 1820, with Missouri coming into the union as a slave state, and Maine as a free state. The Missouri General Assembly first met in September 1820 in St. Louis; Cole County was established on the banks of the Missouri River in November 1820. The county had no towns at that point, but the town of Marion had been platted on the Missouri River near present-day Boonville. Jefferson City was founded in 1825, and became the state capital in 1826. Besides holding special events in 2020, including a special tour of Marion, the county has minted commemorative coins for sale and is raffling off a special rifle made for the occasion by the Historical Armory of Missouri Walnut. Never fear if you don't snag a bicentennial rifle - the bicentennial commission has ordered a small batch of "Cole County 200 Missouri Bourbon Whiskey" from Blacksmith Artisanal Spirits of Lohman. But wait - there's more! Local microbrewery Prison Brews will be creating a special beer made with bicentennial hops.