The Foster and Muriel McCarl Coverlet Gallery is a nonprofit cultural organization that collects, preserves, interprets and disseminates the history of weaving and folk traditions in the Northeastern region of the United States. Located on the bottom floor of the Fred Rogers Center at Saint Vincent College, the McCarl Gallery connects visitors with regional textile traditions through exhibits, programs, and research. The Gallery was established as part of a generous donation to Saint Vincent College by Foster and Muriel McCarl to preserve and exhibit their collection of antique American coverlets. It is considered one of the nation's premier institutions dedicated to this unique form of decorative art.

Visitors can discover the history of weaving and folk traditions of the region through exhibits, interpretive projects, educational programs, and research. The McCarl Coverlet Gallery is a must see location for adults and children alike. 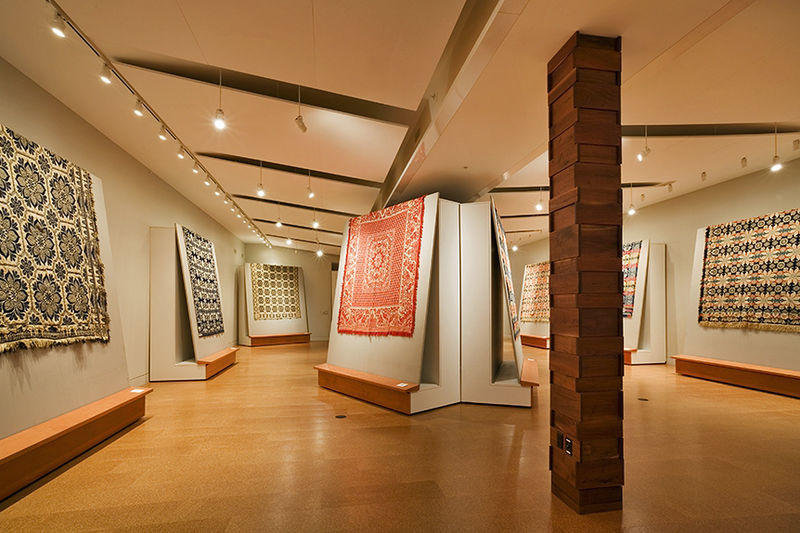 The McCarl Coverlet Gallery was established as part of a $1 million gift to Saint Vincent College by Foster and Muriel McCarl of Beaver Falls, Pennsylvania, who had amassed a rich collection of 388 antique American coverlets. Foster McCarl founded McCarl's Plumbing and Heating Company in 1946, which became a leader in the mechanical contrasting industry. Inspired by a love of American history, Foster and his wife, Muriel, began collecting antiques in the 1950s, including quilts, furniture, iron, brass, china, pottery, and wooden ware. They purchased their first historic coverlet in August 1959 in Ephrata, Pennsylvania, and quickly assembled a prized collection.

“Someone asked me, ‘why coverlets?’ My response was ‘Where else can you find an item that has the name of the weaver who created it by hand, the name of the person it was woven for, the date and the community where the work was completed? When you have a coverlet with all this information, you have found an indisputable piece of American history.’” - Foster McCarl

The McCarl Collection features coverlets made in the American Northeast during the 19th century. Described as "figured and fancy," these intricately woven bedcovers feature vibrant colors and complex patterns. Many were made on Jacquard looms, which used a punchcard system to create symmetrical patterns and imagery such as flowers, trees, birds, geometric shapes, and patriotic symbols. They also often feature the name of the weaver, the year the coverlet was woven, and the name of the recipient, who could have been gifted the coverlet for a special occasion like a marriage or birth. Coverlets were made almost exclusively by professional male weavers using a blend of cotton and wool. While used practically for warmth, coverlets were and still are considered a form of decorative art.

The McCarl Coverlet Gallery has continued to acquire coverlets and other artifacts and documents over the years. The Gallery holds the Anderson/Hawthorne Textile Database and Research Collection, a detailed set of records on more than 14,000 coverlets loomed primarily in the Middle Atlantic and Midwest United States between 1830 and 1860 and their weavers, the largest repository of its kind. One of its largest coverlet acquisitions was a collection from the permanently closed American Textile History Museum in Lowell, Massachusetts. The collection included 301 coverlets along with a Jacquard loom head, assorted looms, and spinning wheels.

The McCarl Coverlet Gallery uses its collection to share a variety of stories from history, including production, technology, design, craftsmanship, and artistry. Changing exhibits have explored topics such as regional weavers, domestic history, colored dyes, imagery of nature and wildlife, weaving technologies, and slavery in the textile industry. The McCarl Gallery offers group tours, school programs, craft workshops, dinner theaters, and workstudy programs for Saint Vincent College students. Exhibits are free and open to the public.