The Lewis-Syford House dates to around 1878 and is an excellent example of the Late Victorian French Second Empire style, an architectural style that is very rare in Lincoln. The house is the oldest remaining building on the University of Nebraska-Lincoln campus, and one of the oldest houses in all of Lincoln. The house was constructed for Elisha M. Lewis, a pastor and missionary. The Syford family owned the house from 1904 to 1965. Constance Syford bequeathed the home to the Nebraska State Historical Society Foundation, which was responsible for its upkeep since 1965. The Lewis-Syford House was listed in the National Register of Historic Places in 1971 as an example of its architectural style; the listing was amended in 2007. The house is currently offered as rental property with four individual bedrooms available, located on Sorority/Fraternity Row. 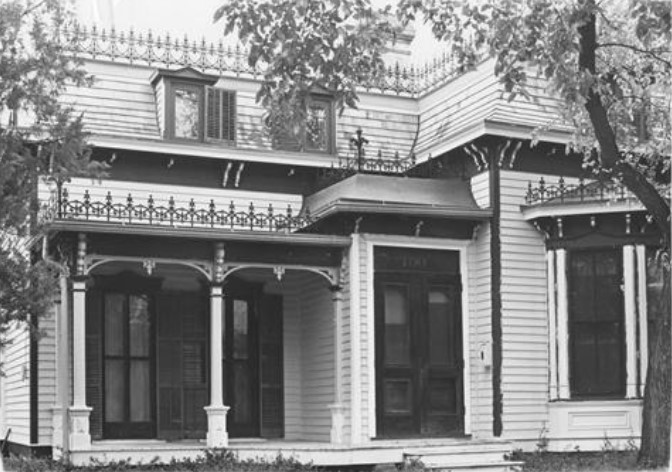 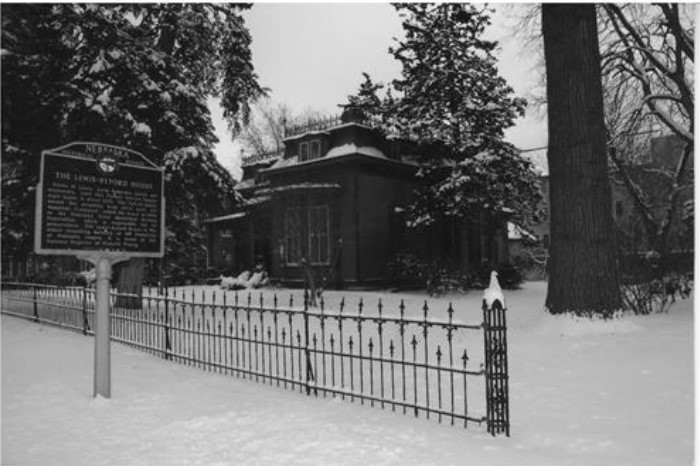 The Lewis-Syford House was built for Elisha M. Lewis around 1878. Lewis was a New York native who became a Congregational minister who moved a number of times before settling in Lincoln around 1877. Land prices were low in Lincoln in this era, with many lots still available. This house was built beyond the boundaries of (north of) the original city. Lewis later also became involved in banking and business; in the late 1880s he was listed in the Lincoln City Directory as president of Nebraska Savings Bank or as associated with the Lewis Hardware & Implement Company. Lewis died in 1891.

The L-shaped, 1.5-story house is wood frame with a wood shingle mansard roof and two chimneys. The foundation is rough-cut limestone and clapboard siding. Two different sizes of brackets alternate under the eaves. Two types of iron cresting decorate the house - one on the mansard roof and one on the front porch, front entrance, and the canted front bay. Ground floor windows are narrow, double-hung; the second floor has single-light casement windows; the windows feature functioning shutters. A secondary porch is on the north side of the building. The rear (east) elevation includes an addition containing a kitchen and pantry, with a second, enclosed porch addition leading to it and a third entrance into the main block of the house. The original house may have contained the kitchen in the basement level. The interior features a lot of woodwork, with more formal, detailed styles in formal rooms, in oak, and less formal treatment in less formal rooms, in pine.

From 1894 to 1904, Mr. T. Hodgeman, a professor at the nearby university, occupied the house. The house was purchased in 1904 by DeWitt Syford, a railroad telegrapher and cattle breeder. Syford's claim to fame is his introduction of Angus cattle to Lancaster County (which contains Lincoln). When Syford died in 1926, his three children inherited the house. None of the children - Lester, Ethyl and Constance - ever married, and all graduated from the University of Nebraska. Lester died in 1952, followd by Ethyl in 1955. In 1965, when Constance, the youngest child died, the house was willed to the Nebraska State Historical Society Foundation.

The house is one of the last remaining houses of its era in the neighborhood. Many have been torn down to construct dormitories or fraternity/sorority houses for University of Nebraska-Lincoln. The university used the house for a while as part of its counselling services, but the house has again become privately owned. The building is the only privately-owned property on the university campus. The property includes a potting shed/outbuilding and garage.

Rooms within the four bedroom-two bath house were offered for rent online. The house was touted as being renovated in 2013, being located along sorority/Fraternity Row, having a full basement for storage, a washer/dryer, and coming with parking spaces. Check out the interior photos on the link below - two pinball machines and a moose head on the wall - what more could you ask for?