There was no bank on Kent Island before 1900. With limited resources and a concerted effort a corporation was formed in 1903. The name of the corporation was “The Stevensville Saving Bank of Queen Anne’s County.” Later in 1912 the name was changed to “The Stevensville Bank of Maryland.” The president of the new corporation was Charles B. Downs. Original bank-directors included: Charles Percy Kemp, Milton Hysore Price, Issac Grollman, B. Harrison Bright, William E. Denny, Sr. Hugh A. Legg, and John Fletcher Ruth. Historic 1903 Bank Building on the National Register of Historic Places. Original fixtures still in place, including the vault & safe. Located in the Stevensville Arts & Entertainment District. Situated next to the Amalfi Coast Italian Wine Bar. Located 3 miles from the Chesapeake Bay Bridge, 35 miles SE from BWI Airport, 44 miles SE from Baltimore, and 43 miles east of Washington, DC. 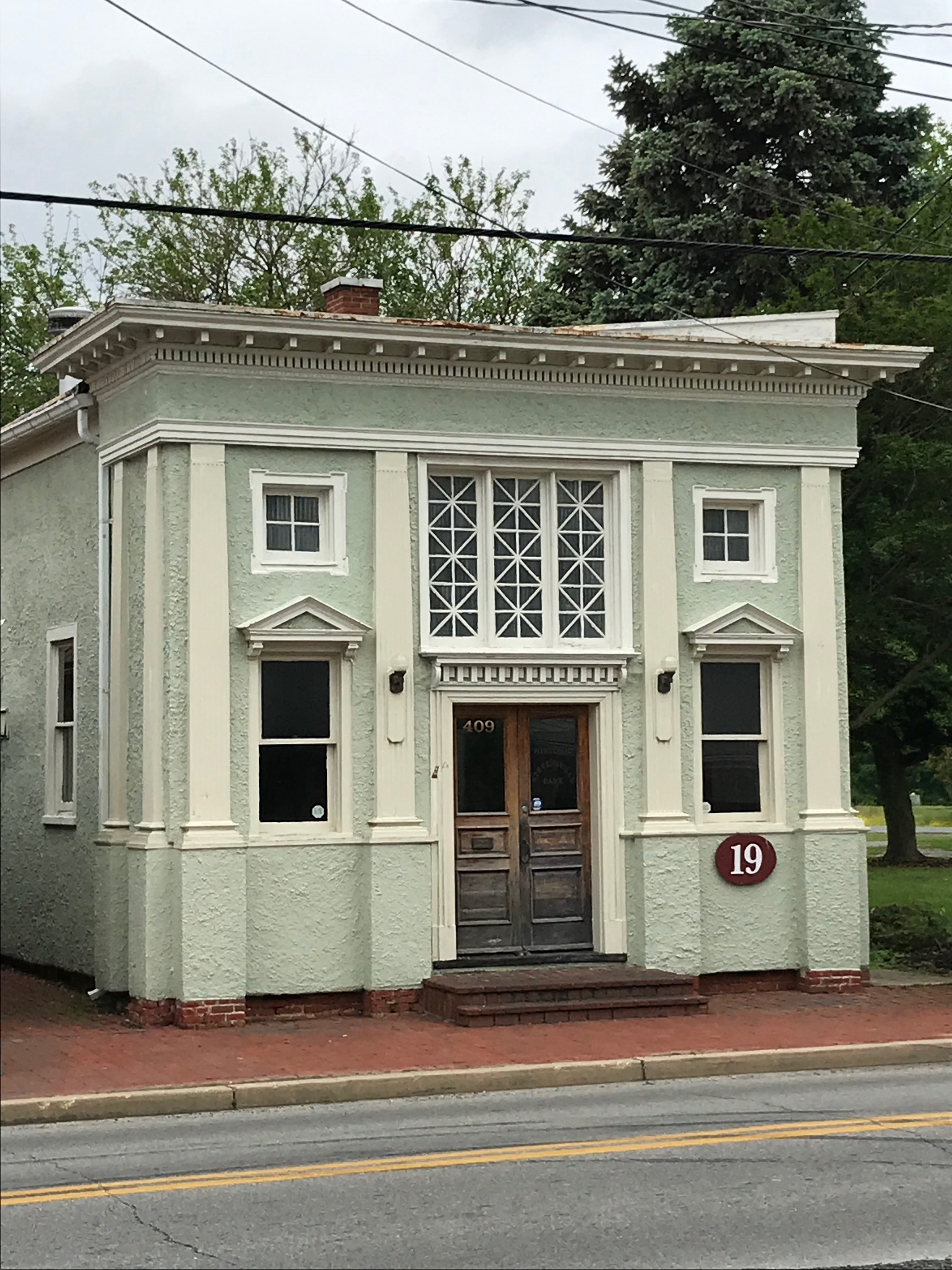 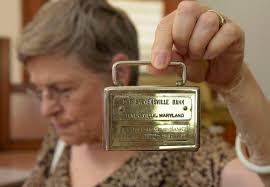 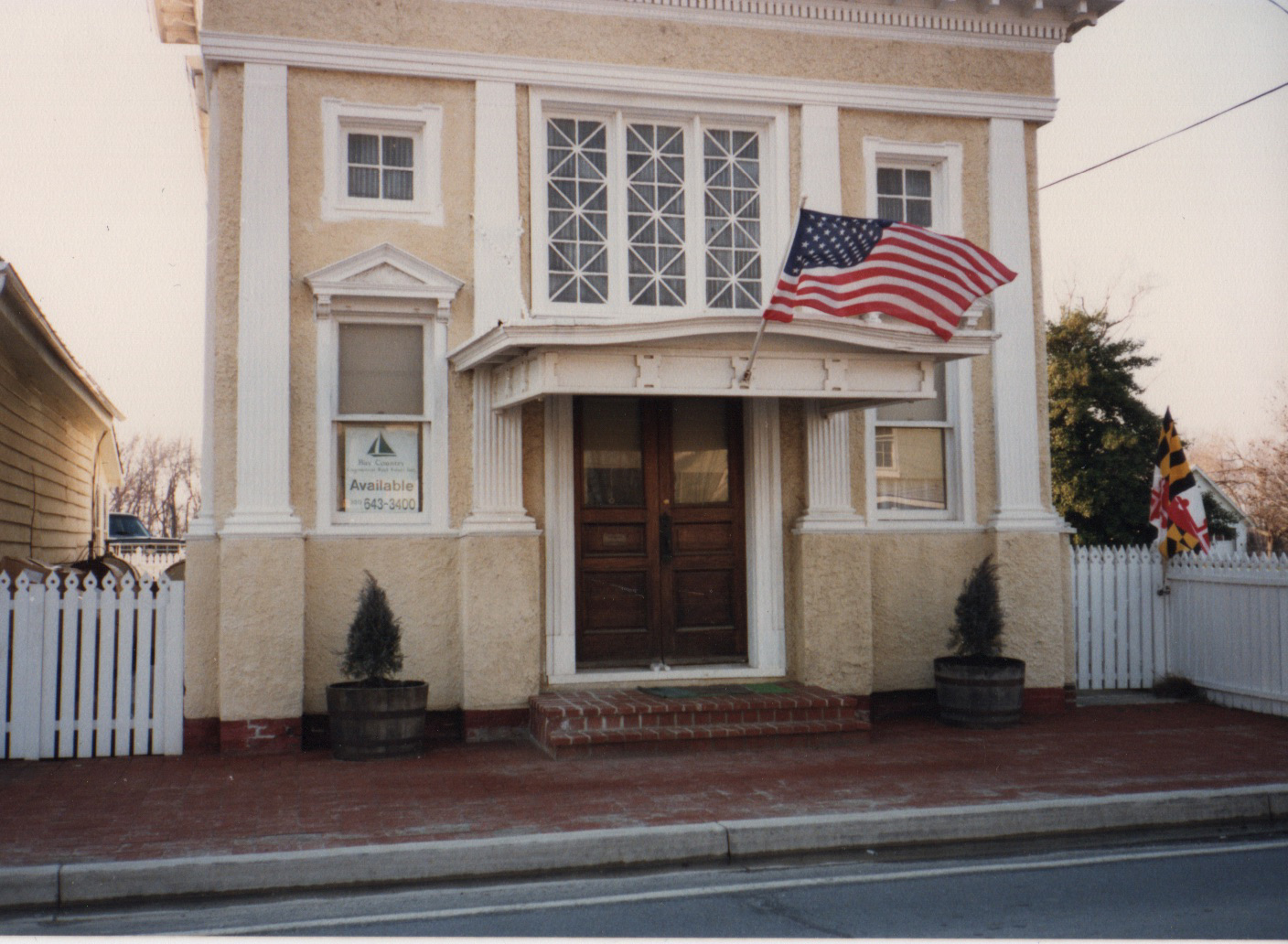 The president of the new corporation was Charles B. Downs. Original bank-directors included: Charles Percy Kemp, Milton Hysore Price, Issac Grollman, B. Harrison Bright, William E. Denny, Sr. Hugh A. Legg, and John Fletcher Ruth. The capital stock was $8,000 divided among 160 shares at par value of $50.00 each. The fledgling bank opened the doors for depositors and borrowers. At this early date, prior to the construction of a bank building, it is not known where the business transactions took place, but deposits were made and loans were executed. A tract of land formerly owned by Dr. William E. Denny was obtained. It was the location of an apothecary shop operated by Dr. Denny’s sister and niece, Miss Anne and Miss Lucy Denny.

In 1909 the single story, two room structure was completed, and after a six year wait, the bank in Stevensville had a permanent home. The building is of plain design, solid with a stucco exterior. The original ornamental pressed-tin ceiling has survived intact. The bank originally had a projecting hood over the entrance door that derived support from heavy chains anchored into the wall, in the style of the marquee hoods found in the turn-of the-century theatres. The bank contained no running water or bathroom facilities and had the dubious distinction of being the last bank in Maryland to have outdoor toilets when it closed in 1960.

For fifty years it was the financial center of Kent Island. The capital stock increased with good times and it weathered the severe economic depression of the early thirties. The opening of the Bay Bridge in 1952 brought new growth and dramatic changes. In 1960 the name was again changed to “The Tidewater Bank” and with the new name, a new location- that of the Kent Island Shopping Center area adjacent to Route 50-301. The bank was then sold to Mr. Harper M. Smith. It housed the office for the newly create Bay Times newspaper owned by Chris and Mary Lou Rosendale. Several businesses occupied the building after the newspaper office moved. The present owner is Mr. Robert L. Marsteller. The building was placed on the National Register of Historic Places in 1983 and is being leased by the Kent Island Heritage Society, Inc. as part of its purpose to identify, preserve, and maintain the heritage of Kent Island.

Building: 740+/- square feet of building (37’ x 20’) with two (2) half baths & high tin ceilings on 2,725+/- square feet of land with two (2) parking spaces on site. The building faces the street on the west side of Love Point Road near the center of Stevensville, MD. It features the original ornamental pressed-tin ceiling. It is the oldest bank building on Kent Island and among the earliest surviving banks in the country. The original interior is virtually untouched, leaving the tellers’ counter and vault intact.