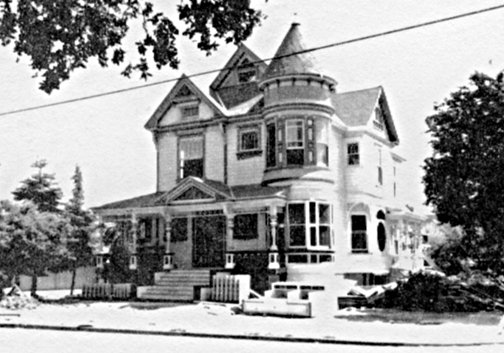 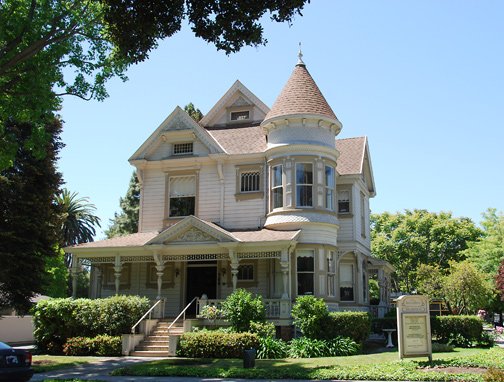 The Downing House, built in 1894 by W. Matlock Campbell for T. B. and Margaret (Sanford) Downing, is one of the most extravagant Queen Anne buildings remaining in Palo Alto. Its round "witch's hat" corner tower is its most striking feature, but the house abounds in ornate details. While it stands as an architectural marvel, the house also stands as a monument to the birth of Palo Alto and Stanford University, the seeds of which blossomed into what became Silicon Valley and a technological hub during late twentieth and twenty-first centuries.
The house arose three years after the incorporation of Stanford University, which eventually became highly influential in the growth of the technological revolution that forged the growth of Silicon Valley.
Though the history of the area pre-dates European and Asian influence by centuries, its modern history begins in roughly the middle portion of the nineteenth century with the establishment of the town of Mayfield in 1855. The San Francisco and San Jose railroad arrived in 1863.
By the 1870s, Leland Stanford began purchasing property including land that became the Palo Alto Stock Farm. Stanford sought a space in Mayfield to create a new university, but Leland wanted the town to ban alcohol sales. When that demand wasn't met, Leland bought land outside of Mayfield and established the city of Temperance Town, which is where he built Stanford University (incorporated in 1891).
A few years later, in 1894, the area was renamed Palo Alto, which is when T.B. Downing had his house built. Downing was instrumental in developing Palo Alto, which eventually included the annexation of the fledgling Mayfield; the town ceased to grow once Stanford and Palo Alto realized its urban success. Downing served on the first Palo Alto City Council and served on the school board. He also invested heavily in the city, including developing the large Downing Block that eventually housed the U.S. Post Office (1909 - 1928).
The building represents the dual histories of Stanford University and Palo Alto. Stanford Alums such as Bill Hewlett and Dave Packard, as well as the founders of Google, Sun Microsystems, Intel, Instagram, Netflix (and many more),  helped turn the area into its informal name, "Silicon Valley." The region and university are noted for its profound influence on the twenty-first-century technological revolution and the dawn of the digital age.