This Gothic Revival style house served as residence and home to four generations of Ticknors. Each one contributing to the structure’s unique architecture. The home boasts three fireplaces, one built with locally manufactured brick. The house underwent substantial remodeling by its new owners, Lynne and Terry Rickert, as they created four separate rooms, each with a separate bath, to accommodate patrons. Exterior renovations did not result in any major changes to the structure, which still serves as a bed and breakfast today. 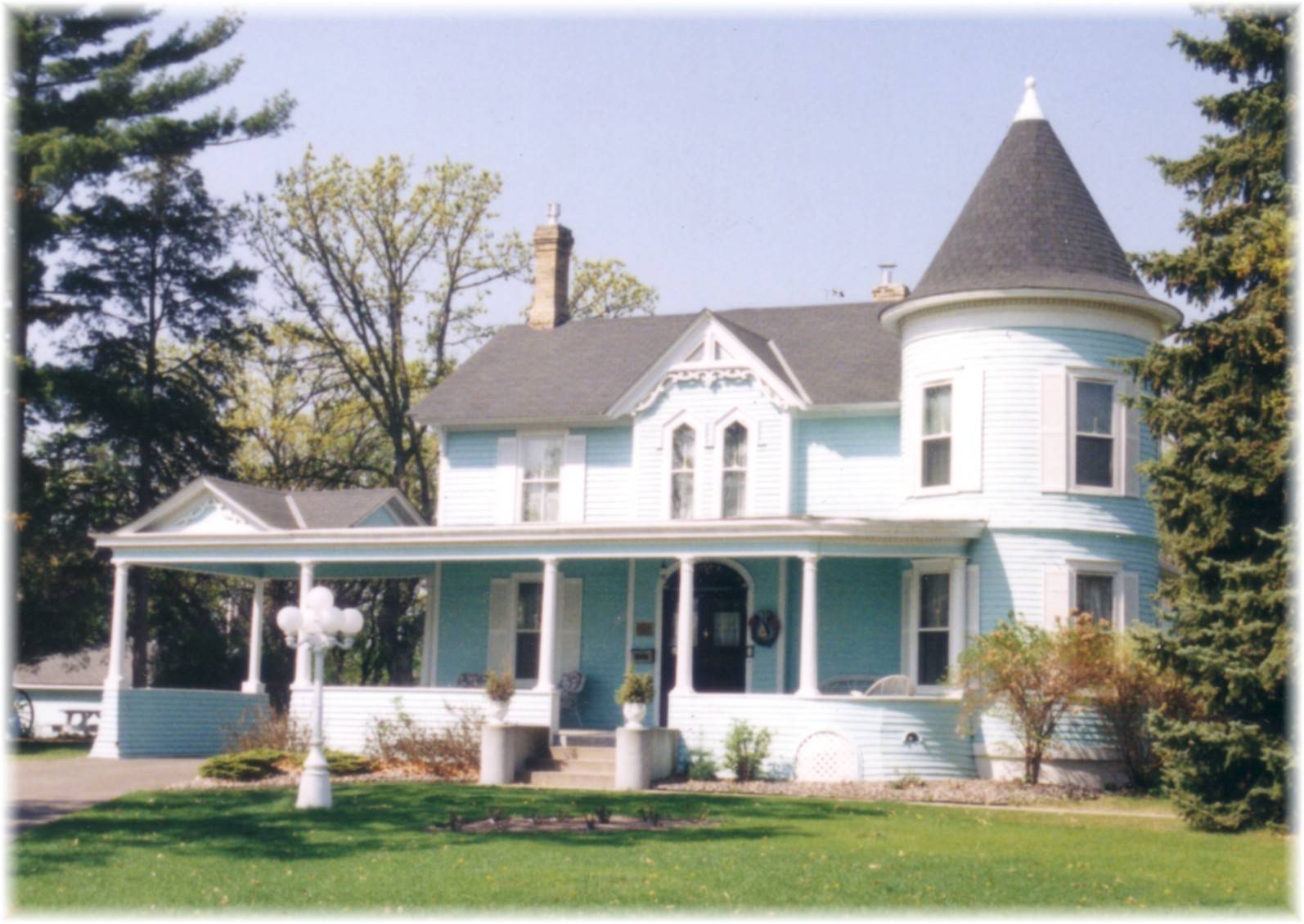 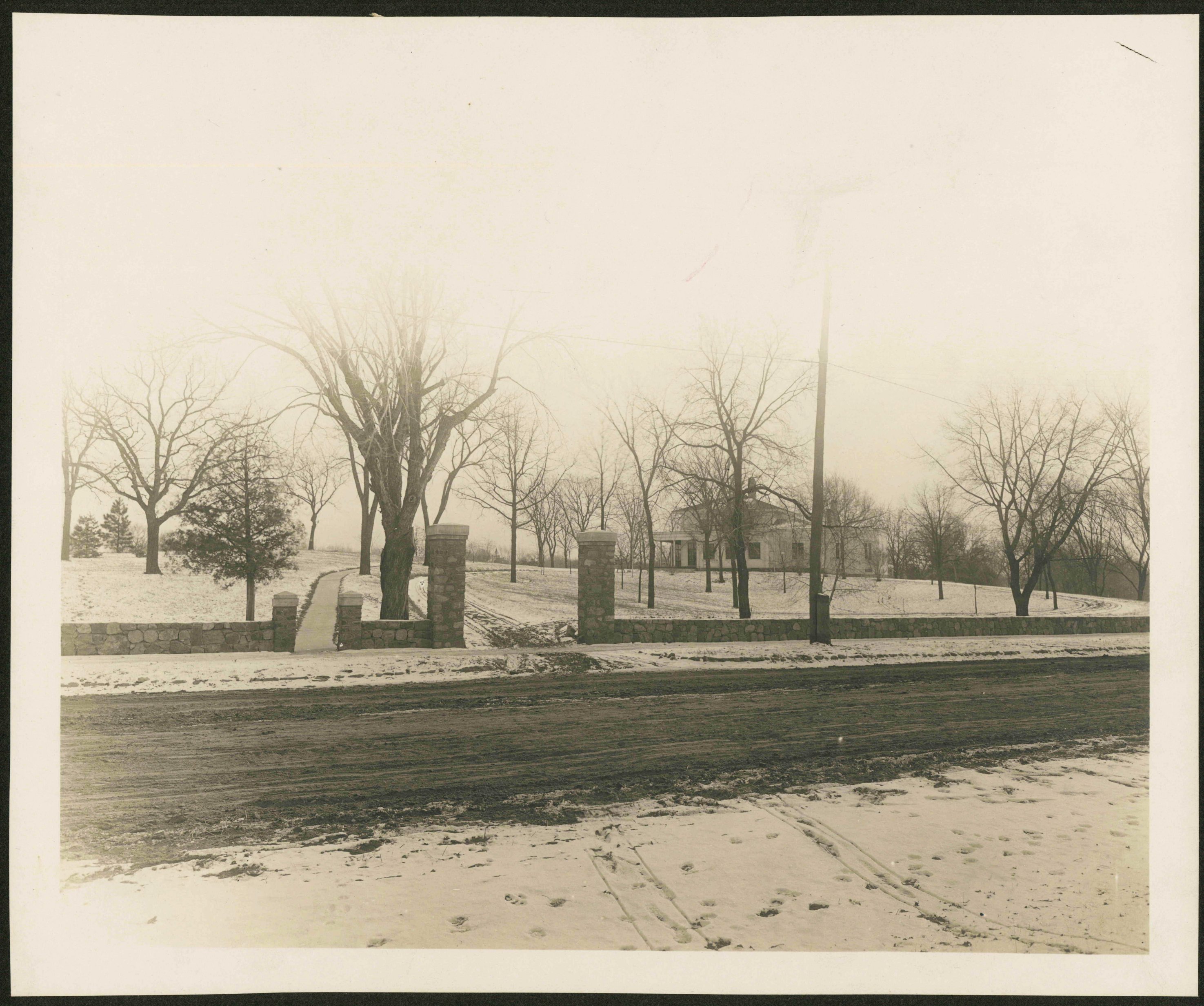 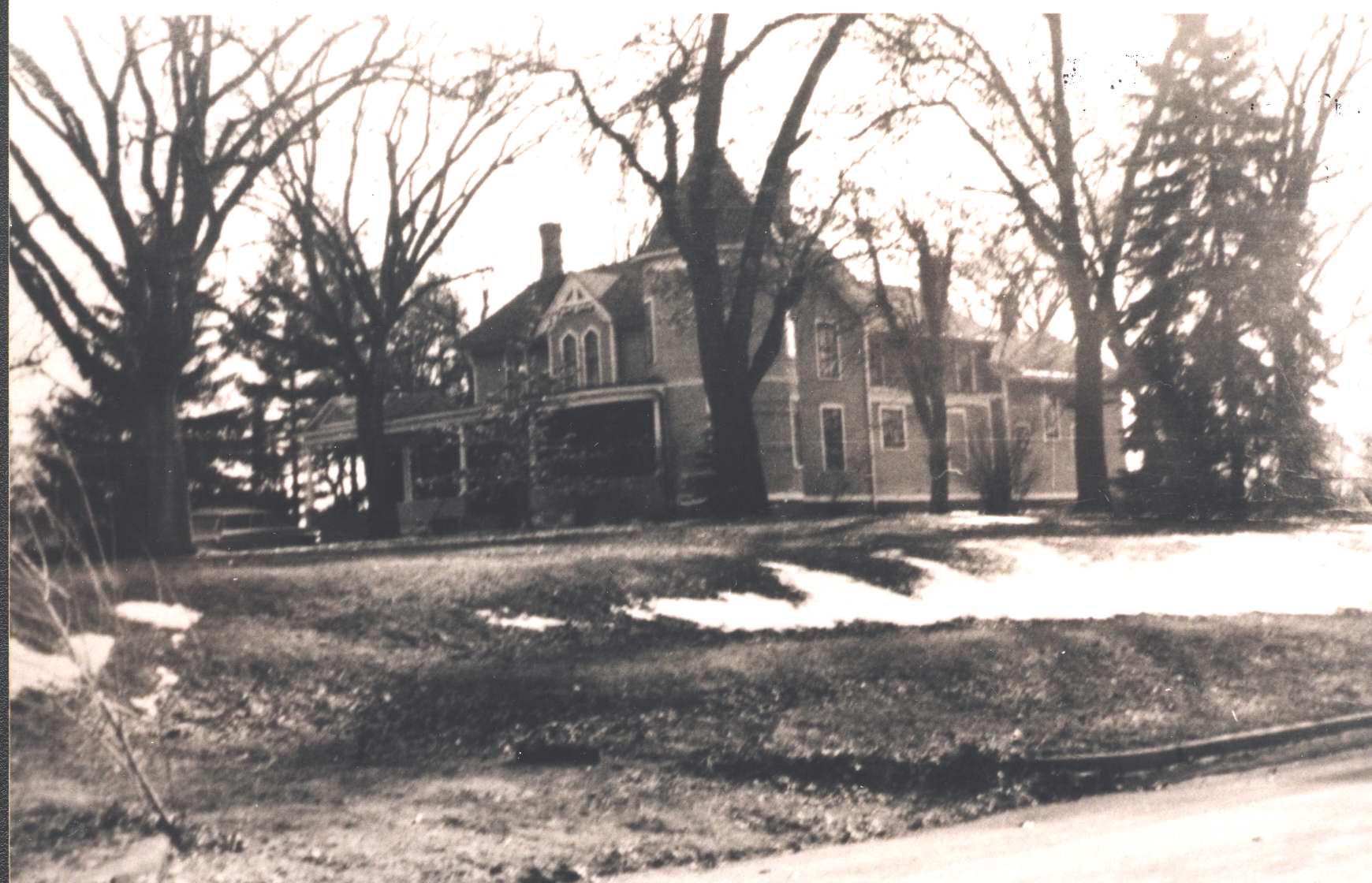 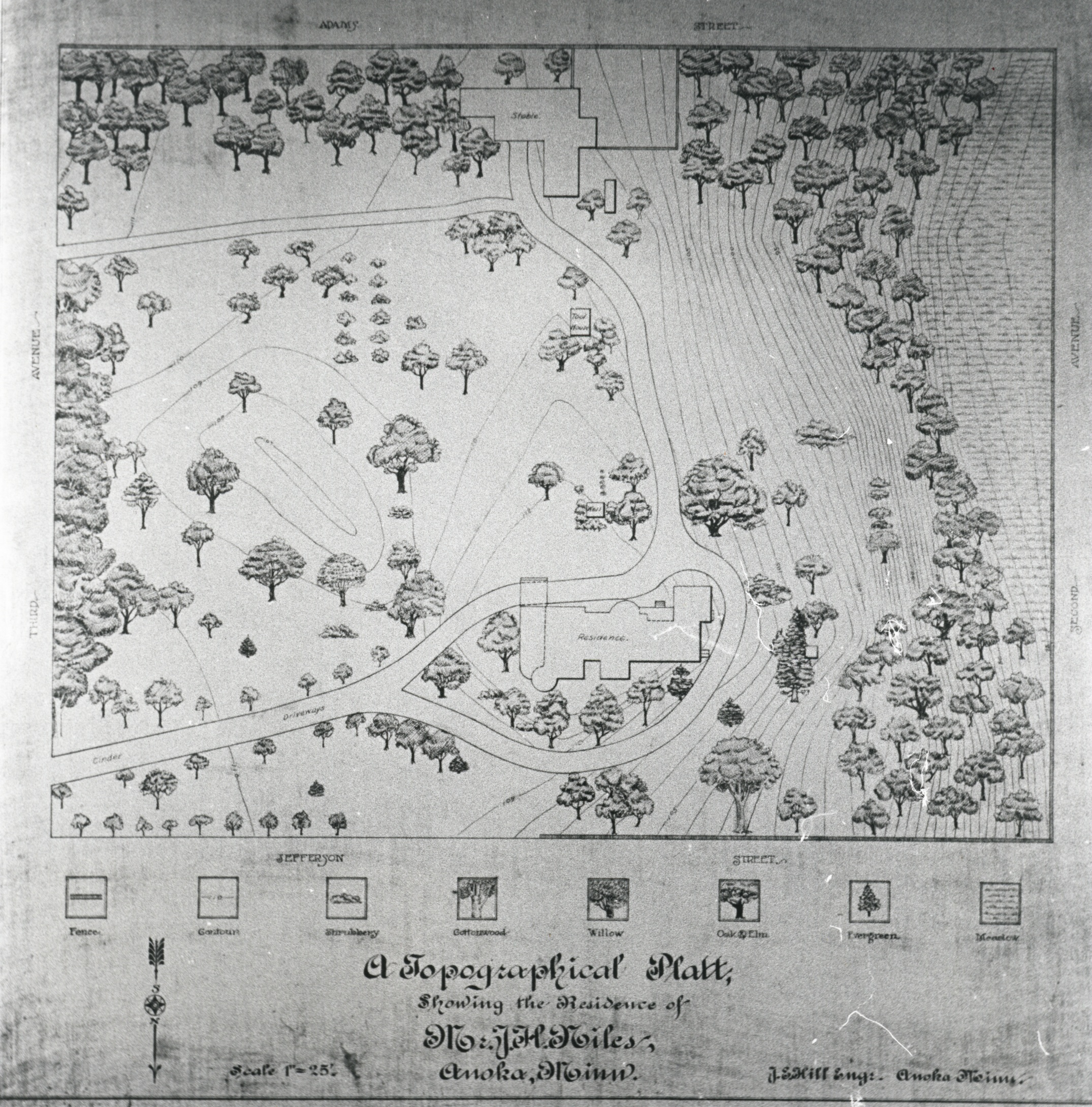 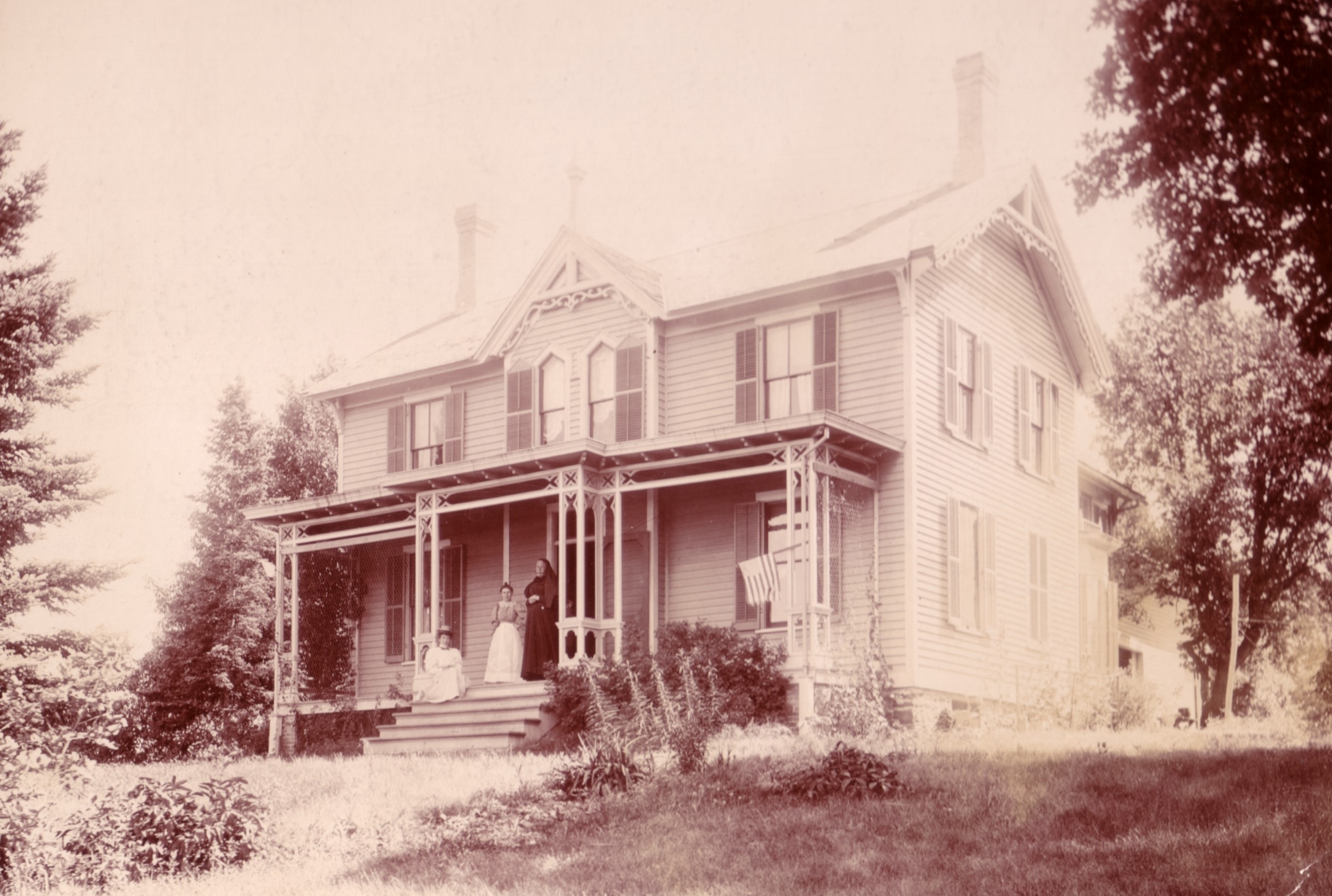 The first generation of Ticknors were among the original white settlers of Anoka who arrived and began developing the river town. They opened a Dry Goods Store in 1855, which they later converted into a cigar manufacturing business in 1860. Building upon this success, Heman Ticknor expanded the businesses to include a Drug Store which he opened in 1864.  Built in 1867 for his new wife, Anna (Sweeney) Greenwald, the floor plan of their new Gothic Revival style house wasin the shape of a “T” where the front entrance overlooked the confluence of the Rum and Mississippi Rivers. Still evident from the original plans are the Gothic elements comprised of gables and their elaborate bargeboards along with the arched windows in the front façade. The home boasts three fireplaces, one built with locally manufactured brick.

Shortly before Heman Ticknor’s death in 1897, his daughter Zale, and son-in-law, John Niles, took up residence in the house and later added their own unique architectural changes. John practiced law as an attorney while Zale worked within Anoka’s well known women’s organization, the Philolectian Society, to establish a city library.

The couple’s plans included dividing the existing structure into three sections. The front section that faced west switched places with the rear section, while the center portion remained intact. These subtle but significant changes gave the house a fashionable new Third Avenue South address-- highly desirable in 1901. Historians believe changing the address acted as a major factor in the remodel work. Architectural changes included adding a tower section with Queen Anne and Neo-Classic elements. A full front porch was added along with Corinthian columns, a projecting bay window, and porte cochere, or covered area for the vehicles to pull under attached to the house.

In 1913, the house passed to the next generation. Natalie Niles, daughter of John and Zale, who married Arthur Lee Smith. They raised their son, Ticknor Niles Smith, in the house. In 1938, after Ticknor went away to college, the Smiths added one and a half stories to the back of the house. The couple further modified the interior, dividing it into three sections for apartments. In 1977, Ticknor Smith sold the residence out of the family, whereupon further renovations and extensive interior remodeling converted the house into a duplex. That same year, the house was nominated for inclusion on the National Register of Historic Places, and achieved recognition in 1980.

By 1996, the famed house had assumed a new role as a bed and breakfast. Once again, the house underwent substantial remodeling by its new owners, Lynne and Terry Rickert, as they created four separate rooms, each with a separate bath, to accommodate patrons. Exterior renovations did not result in any major changes to the structure, which still serves as a bed and breakfast today under the care of Deb and Dave Wallace.

Turning point: Having survived 110 years in a single family, the Ticknor home passed to strangers who renovated the structure, listed it on the National Register of Historic places, and now welcome the public in to enjoy this treasure.

1867: Heman and Anna Ticknor complete construction on their home.

1896: Zale (Ticknor) Niles brings her husband and daughter to live in the house with her mother.

1938: Natalie Smith begins another round of modifications to the structure.

1977: The Ticknor home becomes apartments and is placed on the National Register of Historic Places.

1996: Ticknor Hill Bed and Breakfast begins, allowing the public to stay in the Anoka mansion through the present day.