The Windego Park Auditorium was built in 1914 with encouragement from local music educator Thaddeus P. Giddings, and served as a frequently-used community space for music and theater performances for the next two decades. Falling out of use after Giddings moved away from the area, the last recorded performance was given there in 1938. During World War II, citizens donated the metal parts of the theater--the railings, support poles and awning frame--to the scrap metal drives for the war effort. Efforts to preserve the stadium led to its nomination and inclusion on the National Register of Historic Places in 1980. 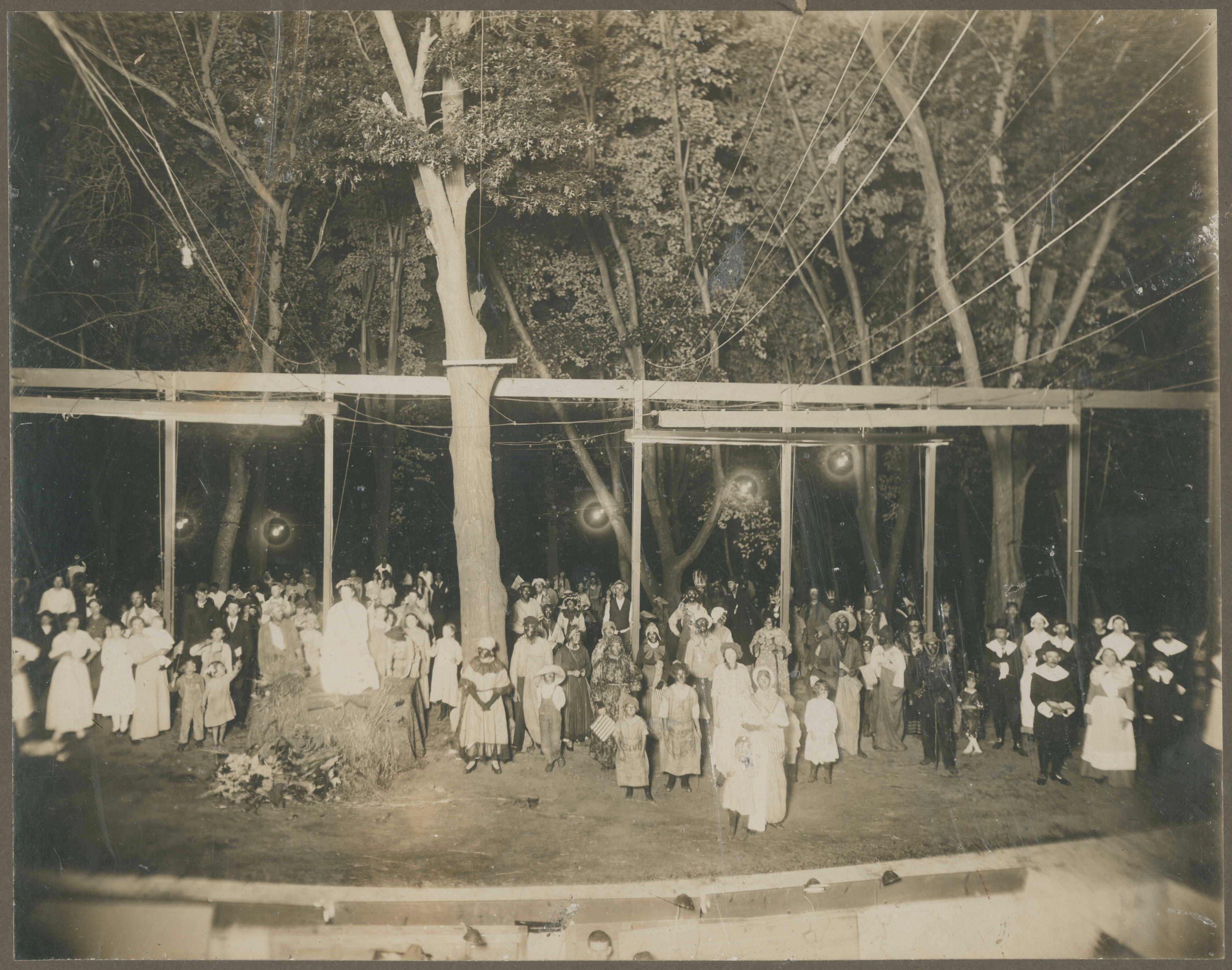 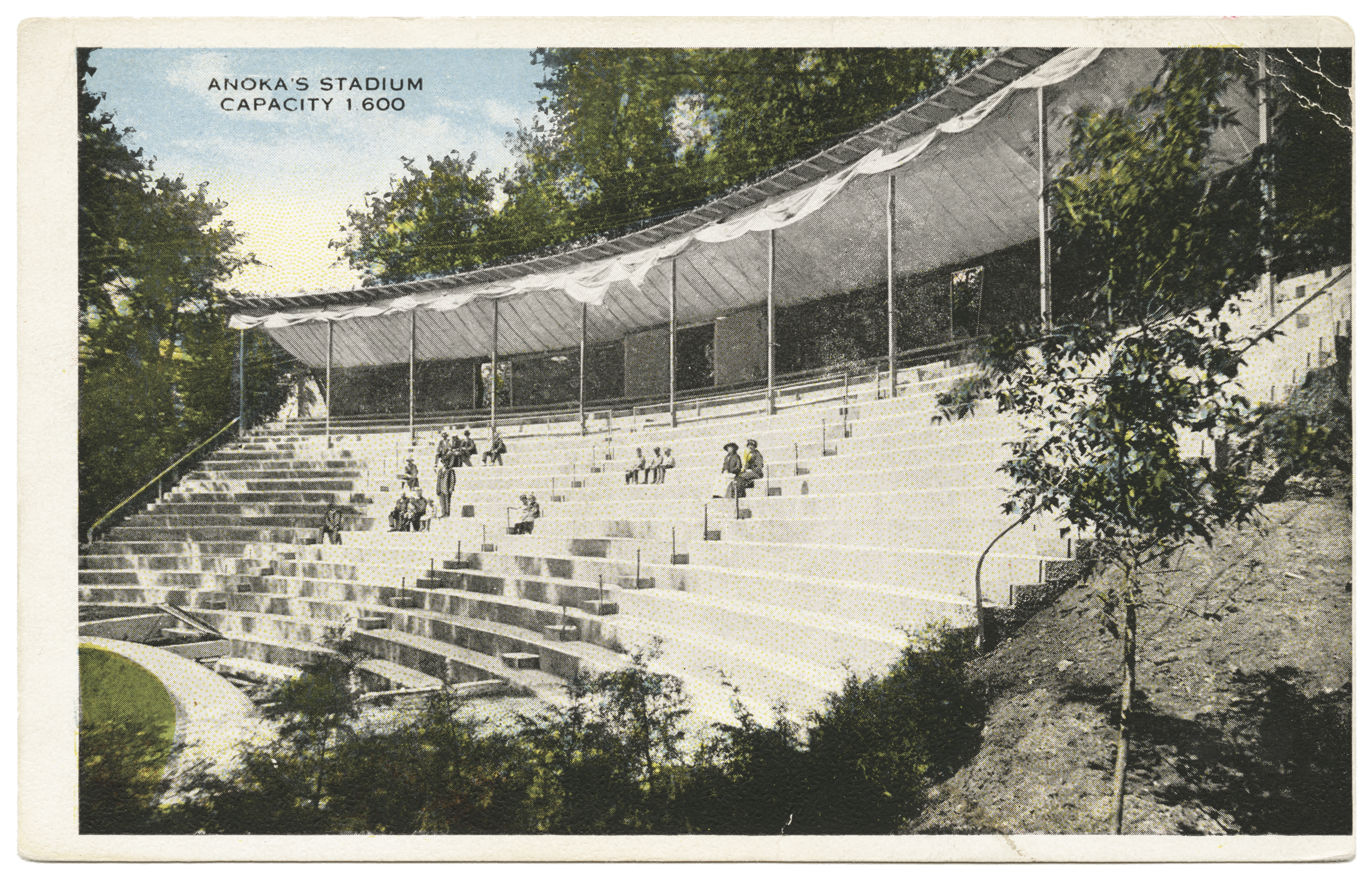 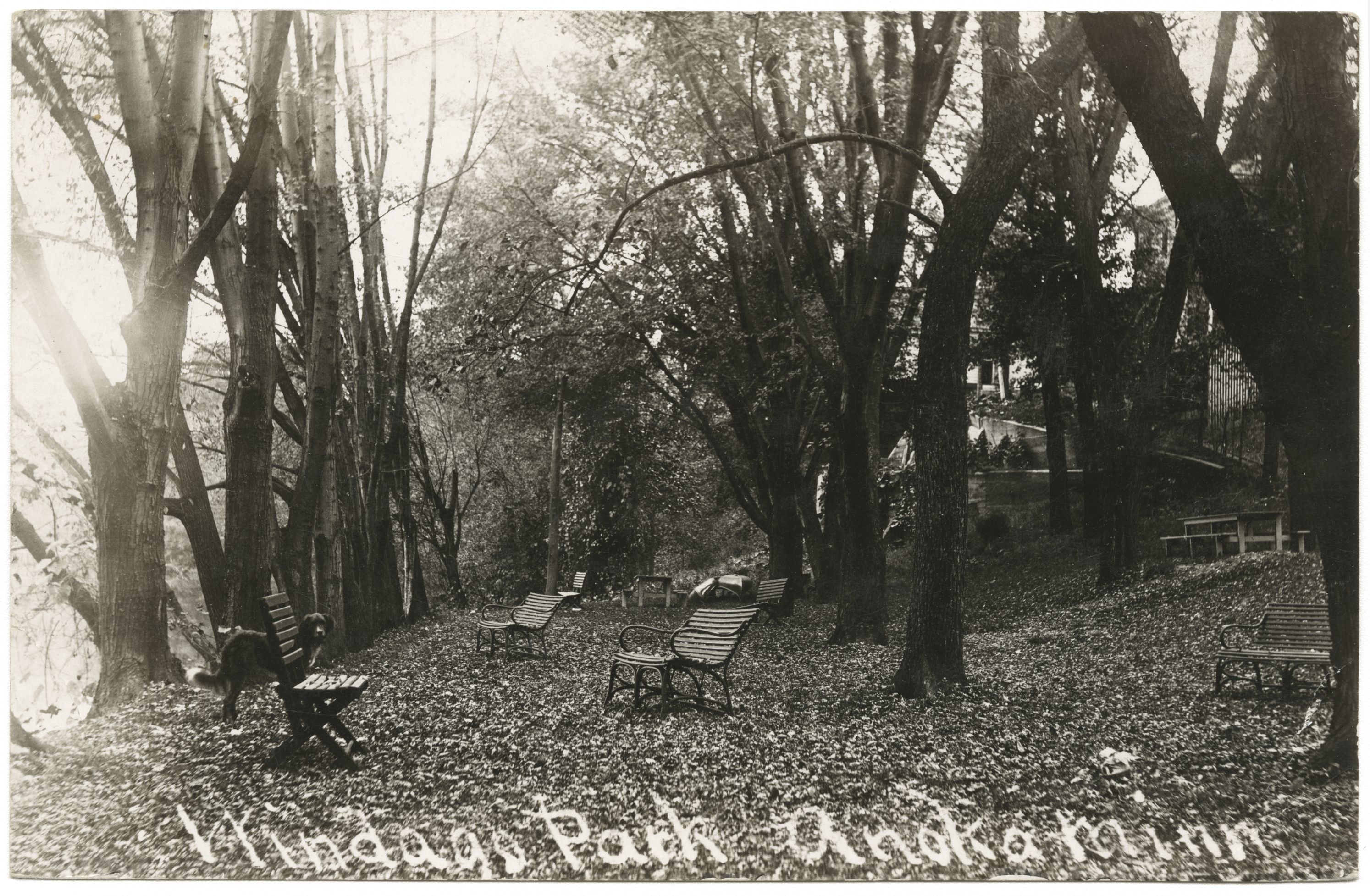 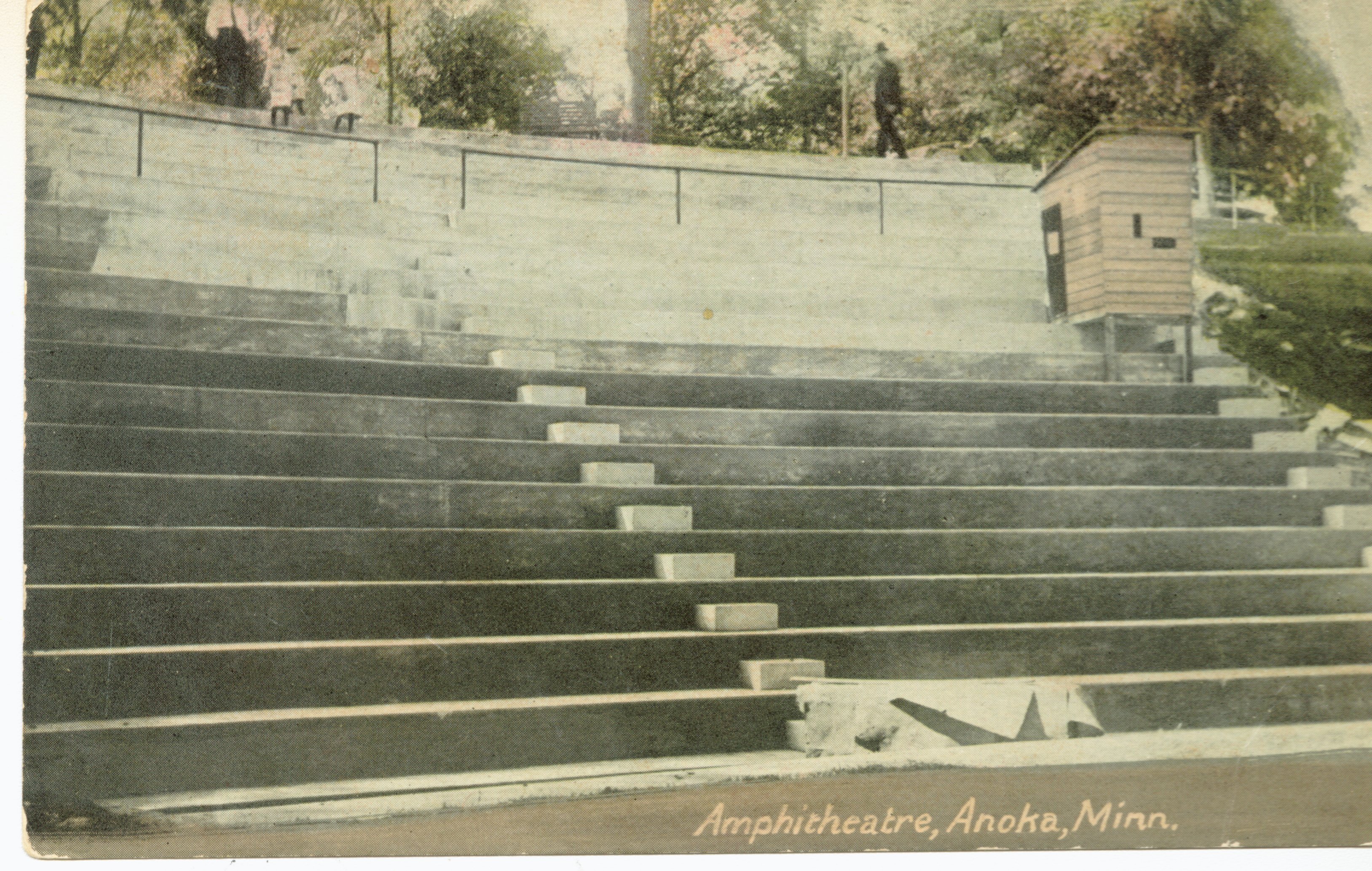 Set along the west bank of the Rum River, the Windego Park Auditorium, also referred to as the Amphitheater or stadium, was completed on the eve of the First World War, August 17, 1914, and evokes the ancient amphitheaters of Greece and Rome.

The idea for building such a theatre came from Thaddeus P. Giddings and likely stemmed from the “Cities Beautiful” movement highlighted at the Chicago Exposition of 1893. Giddings worked as a music teacher in the Anoka schools before leading the music department in the Minneapolis Public schools. His legendary passion for involving the community in music led him to later found the National Music Camp at Interlochen, Michigan, in 1928. Prior to the construction of Windego Park, Giddings used a vacant lot with a hillside on the west side of the Rum River for a “Community Sing” event. Giddings had the lot cleared of weeds and underbrush as well as getting the trees trimmed. People reclined on the hillside and watched the entertainment perform from a gasoline truck converted to a piano stage. To help the crowd, the song lyrics were projected onto a sheet hung between trees. Spurred by the concert’s success, the City Council formulated plans for a concrete stadium at that location.

The designers, William Purcell and George Elmslie, were leaders in the Prairie architectural movement, which is usually marked by efforts to integrate the surrounding landscape by use of horizontal lines, flat or hipped roofs with broad eaves, solid construction, and scant use of decoration. They created 17 concrete steps with seats to form the main auditorium, whose curved back wall along Ferry Street opened for a ticket office at the center. Exits at either end of the seating area flanked the audience, who could enjoy lighted aisle railings during performances at night. Purcell and Elmslie solved the challenge of unpredictable Minnesota weather by protecting patrons from rain or sun with an awning system. Brightly colored canvas with a series of cords and rings allowed the awnings to retract into folds over the back row of seats. Later, the unsatisfactory character of the cement seats was remedied by installing wooden slats with comfortable backs that rested on top of the cement.

Under the seating area, performers could find storage and dressing rooms. Though the main stage was concrete and repeated the auditorium curve, the projecting area of the stage remained grass. When the Stadium was completed it boasted a movie projector, and local tradition believes it had the largest awning in existence at the time.

This theater was the site of many locally produced plays, pageants, operettas, concerts, community meetings, patriotic rallies, and sing-alongs. The Anoka High School Class of 1915 remembers theirs was the first class to use the new auditorium for commencement exercises. One play, The History of Agriculture, featured 13 scenes, each presented by a different Anoka County Commercial Club. The pageant told the story of farming from the first scene featuring Native Americans arriving and departing on the river beyond the stage in a canoe to a present day (1916) Farmers Club meeting.

The theater fell into disuse after its event planner, Thaddeus Giddings, relocated to Michigan. The last recorded use of the theater was in 1938. During the World War II, citizens donated the metal parts of the theater--the railings, support poles and awning frame--to the scrap metal drives for the war effort. Efforts to preserve the stadium led to its nomination and inclusion on the National Register of Historic Places in 1980.

Turning point: The passion of one man, Thaddeus Giddings, to create a community location of the arts survived the First World War and Great Depression, but patriotic fervor contributed to its demise in the 1940s.

1914: Construction is completed on the amphitheater on the eve of WWI.

1980: Received recognition on the National Register of Historic Places.