The Riverside Hotel is now known as the Rum River Inn, this building is the only surviving commercial building dating to the settlement of lumber boomtown St. Francis, Minnesota. It was built around 1860 when the lumber and milling industry enjoyed great power. Overlooking the Rum River, the two story, rectangular structure has clapboard siding with a projecting gable section in the front facade, which makes an “L” shape. The addition of a porch and many necessary renovations have transformed the property into a bar and residence, keeping the historic nature of the building in motion. 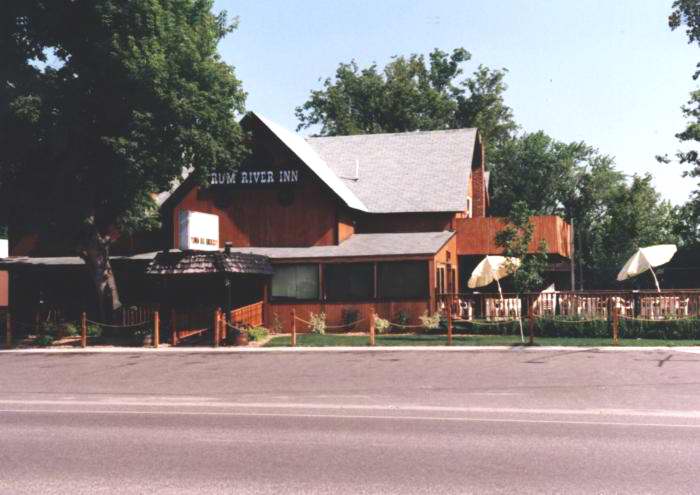 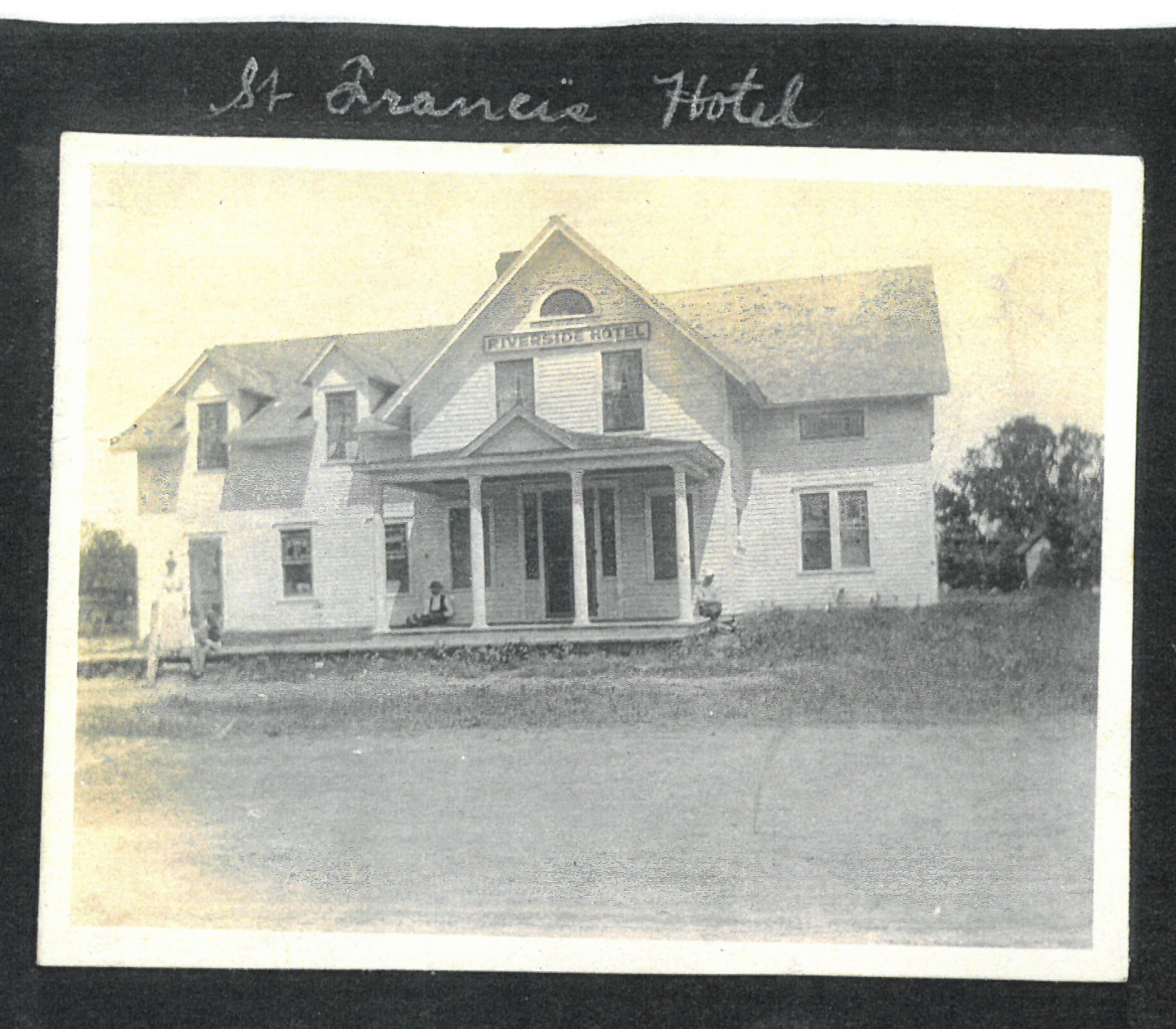 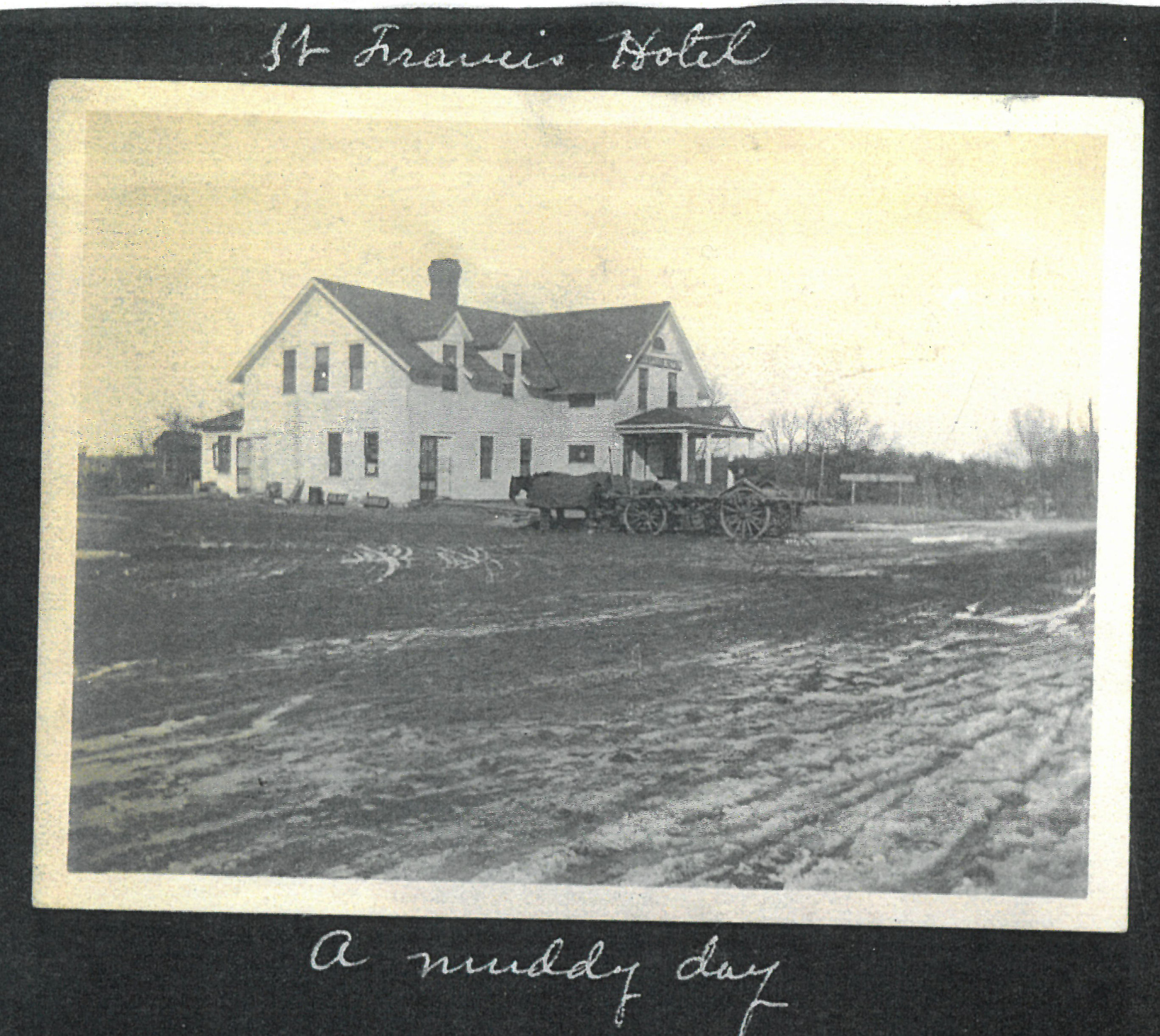 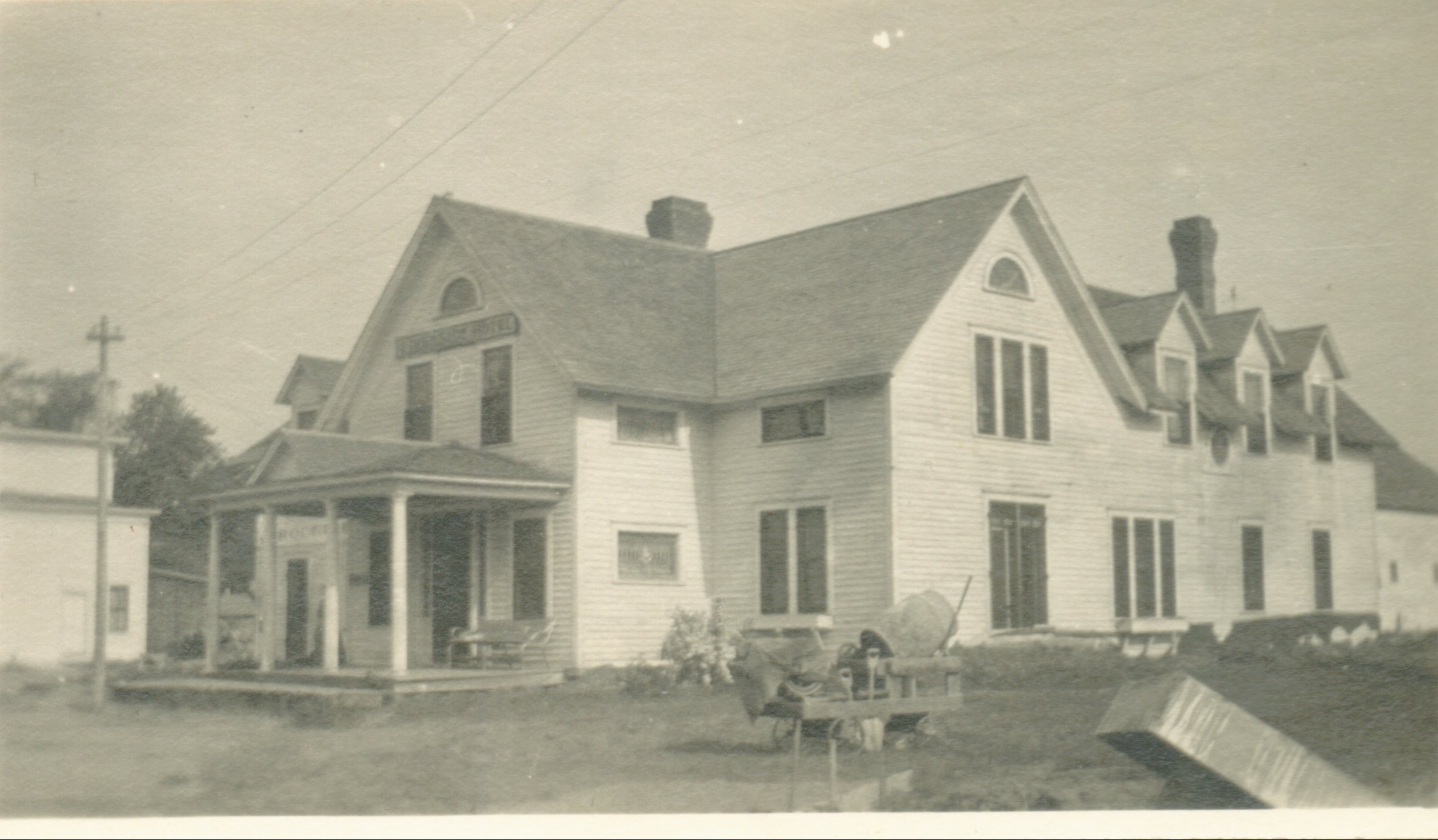 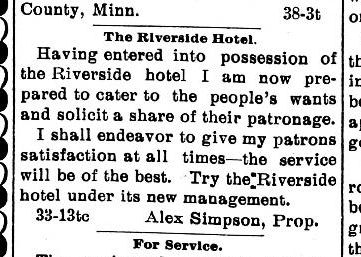 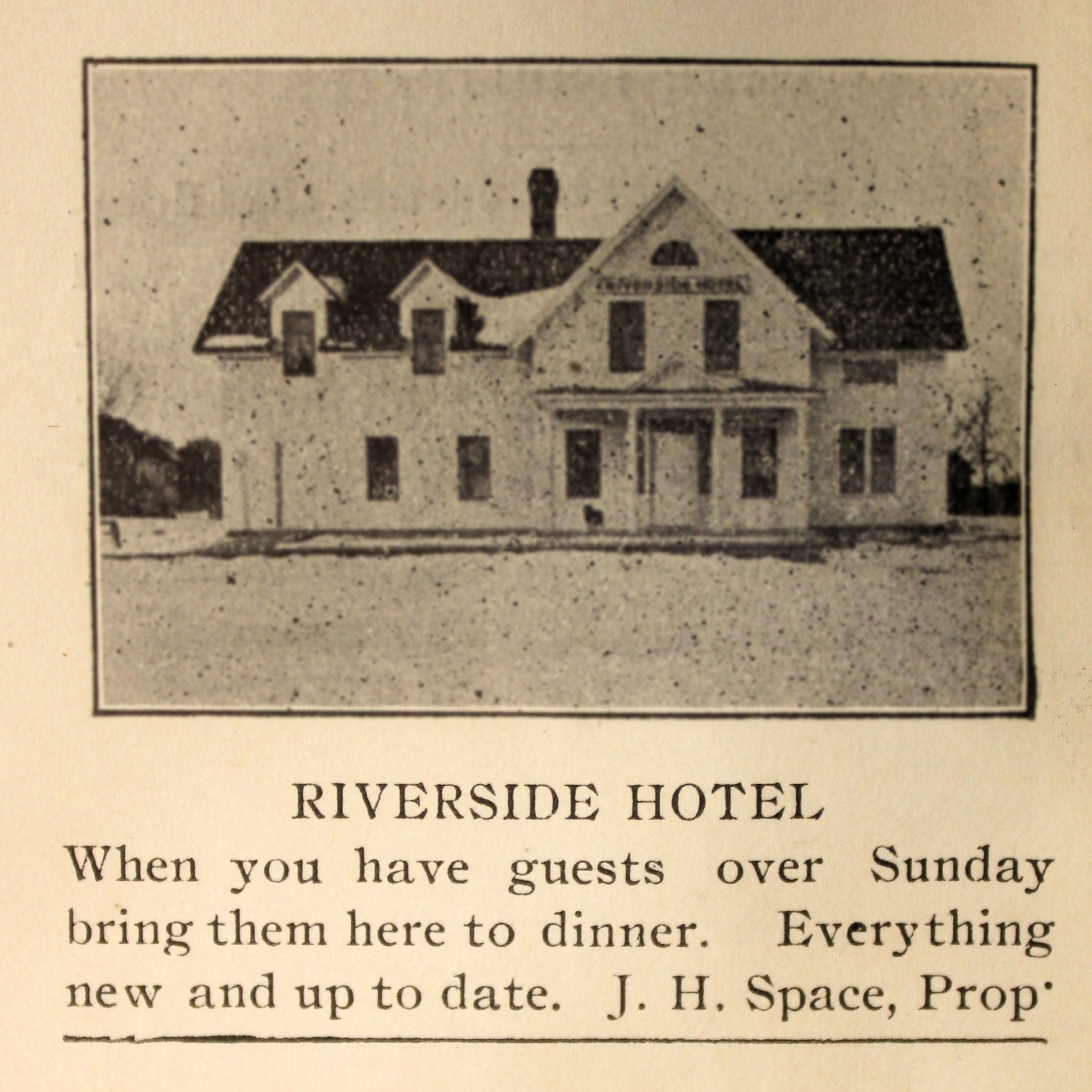 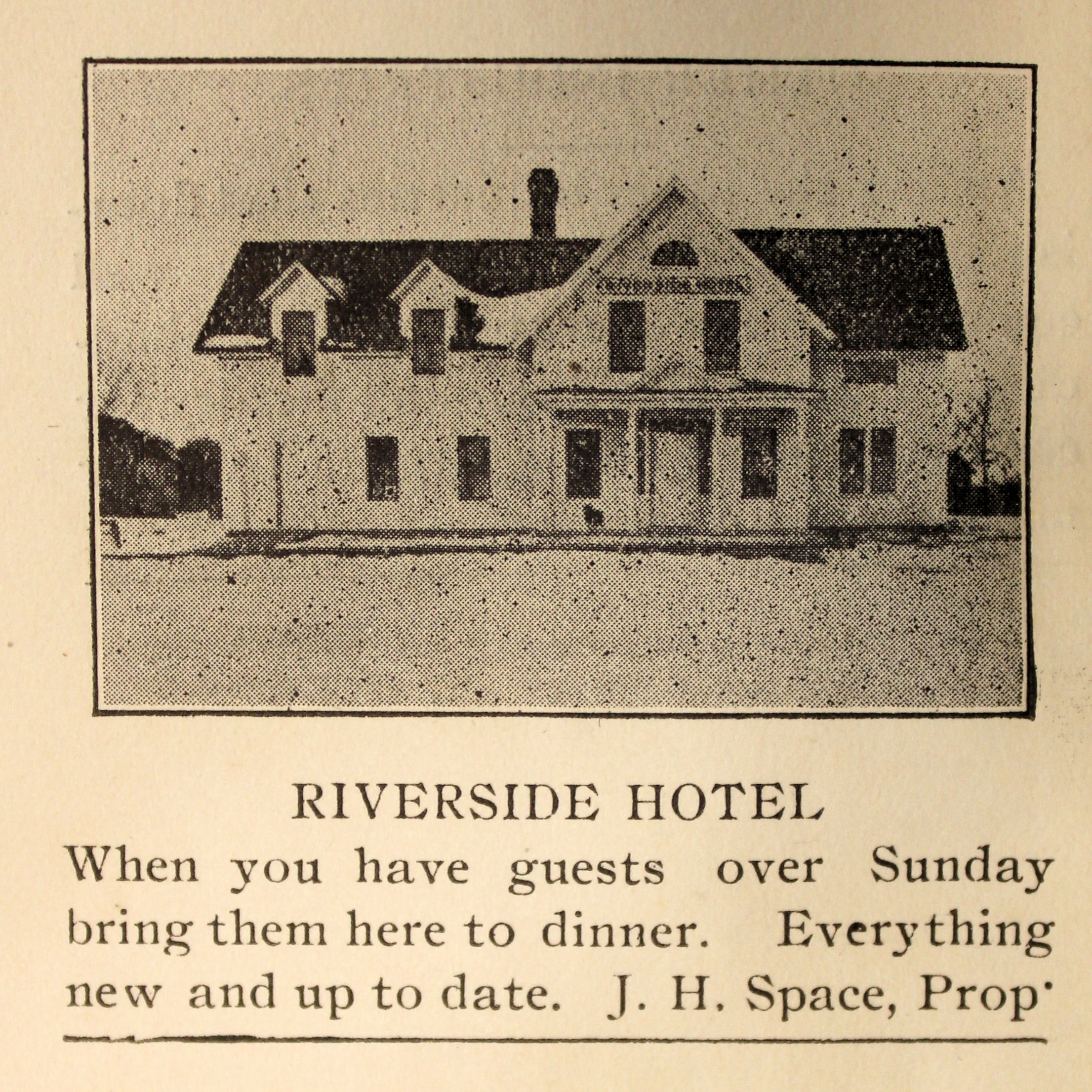 In 1855, Dwight Woodbury came west to Anoka to join his son, Albert, who had preceded him. Born in Massachusetts in 1800, Dwight would go on to build the Woodbury House in Anoka, but first made his mark in St. Francis. This Victorian Gothic frame residence began as lodging for the employees of the Woodbury family, then soon expanded into a hotel for seasonal workers at the sawmill.

Overlooking the Rum River, the two story, rectangular structure has clapboard siding with a projecting gable ended section of the front facade, which makes an “L” shape. According to the National Register application, “the original architectural design features are limited to the semi-circular windows in the east gable end and in the front projecting gable” and brick now covers a portion of the building facade. The addition of a porch and many necessary renovations have transformed the property into a bar and residence, keeping the historic nature of the building in motion.

After Dwight Woodbury’s death in 1884 his son, John Woodbury, became manager of the St. Francis Milling Company and came to live in St. Francis. In 1891, John built a large mill in St. Francis to mill all types of flour. It was during this time the home took on the name of Riverside Inn, acting as home to the workers until the mill closed in 1923. Newspaper advertisements indicate that different owners ran the hotel during this period, with a J.H. Space the proprietor in 1906, and an Alex Simpson advertising his new ownership at another time.

Since then, the Inn has had several incarnations, the latest of which is the Rum River Inn, a bar and local hangout.

The Riverside Hotel/Rum River Inn gained a listing on the National Register of Historic Places in December of 1979.

Turning points: As the white settlers expanded west and opened up the landscape to use the natural resources of lumber and the rivers to transport goods, sometimes the same names appear. From hotel for workers to its current use as a local restaurant, the Riverside Hotel continues to serve those who need a place for a break.

1855: Dwight Woodbury arrives and opens the saw mill, building his home on the Rum River in St. Francis.

1884: John Woodbury becomes manager of the St. Francis Milling Company upon the death of his father, Dwight.

1891: John builds a large flour mill and the home expands to a hotel for the workers.

1979: The building is listed on the National Register of Historic Places.