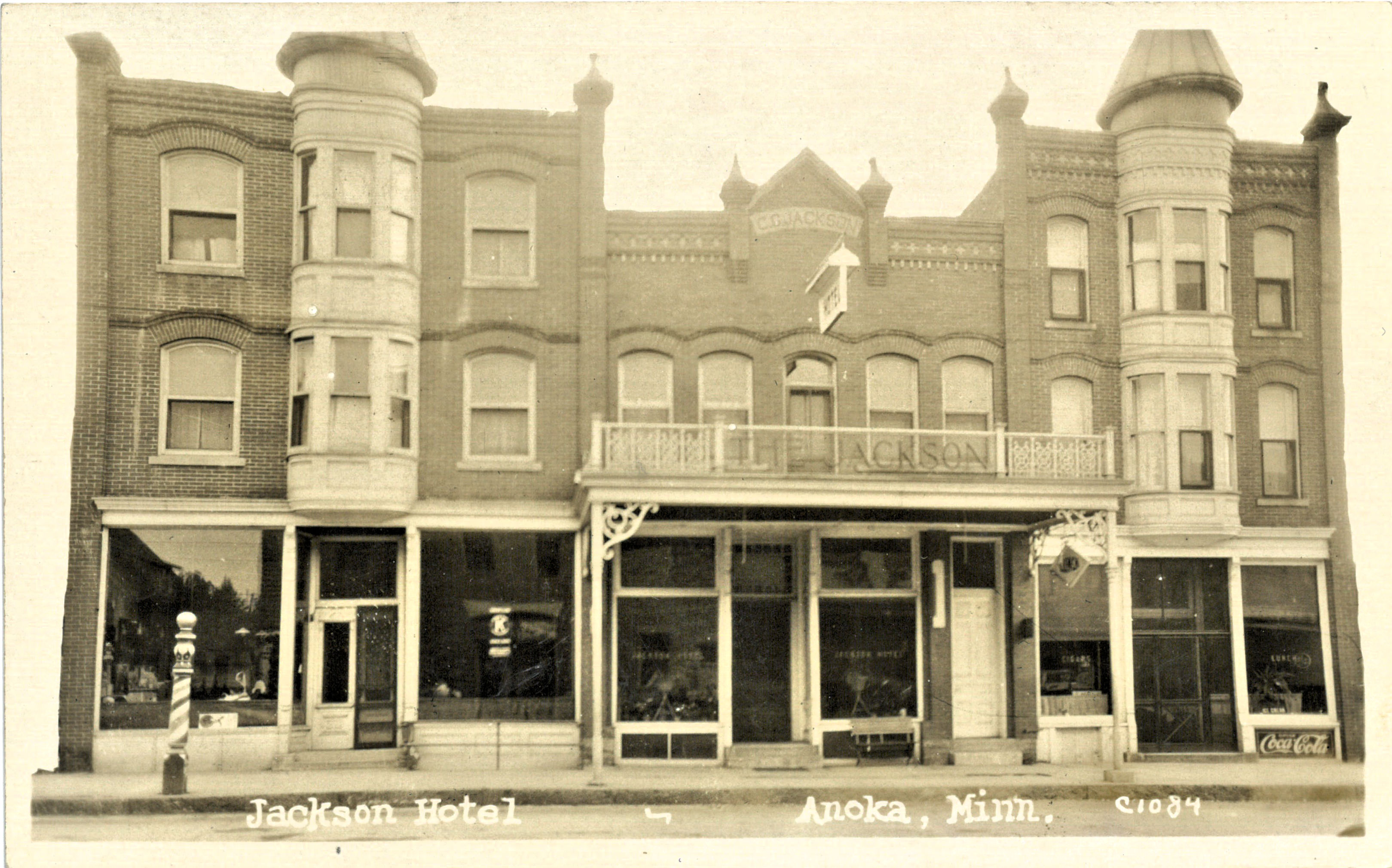 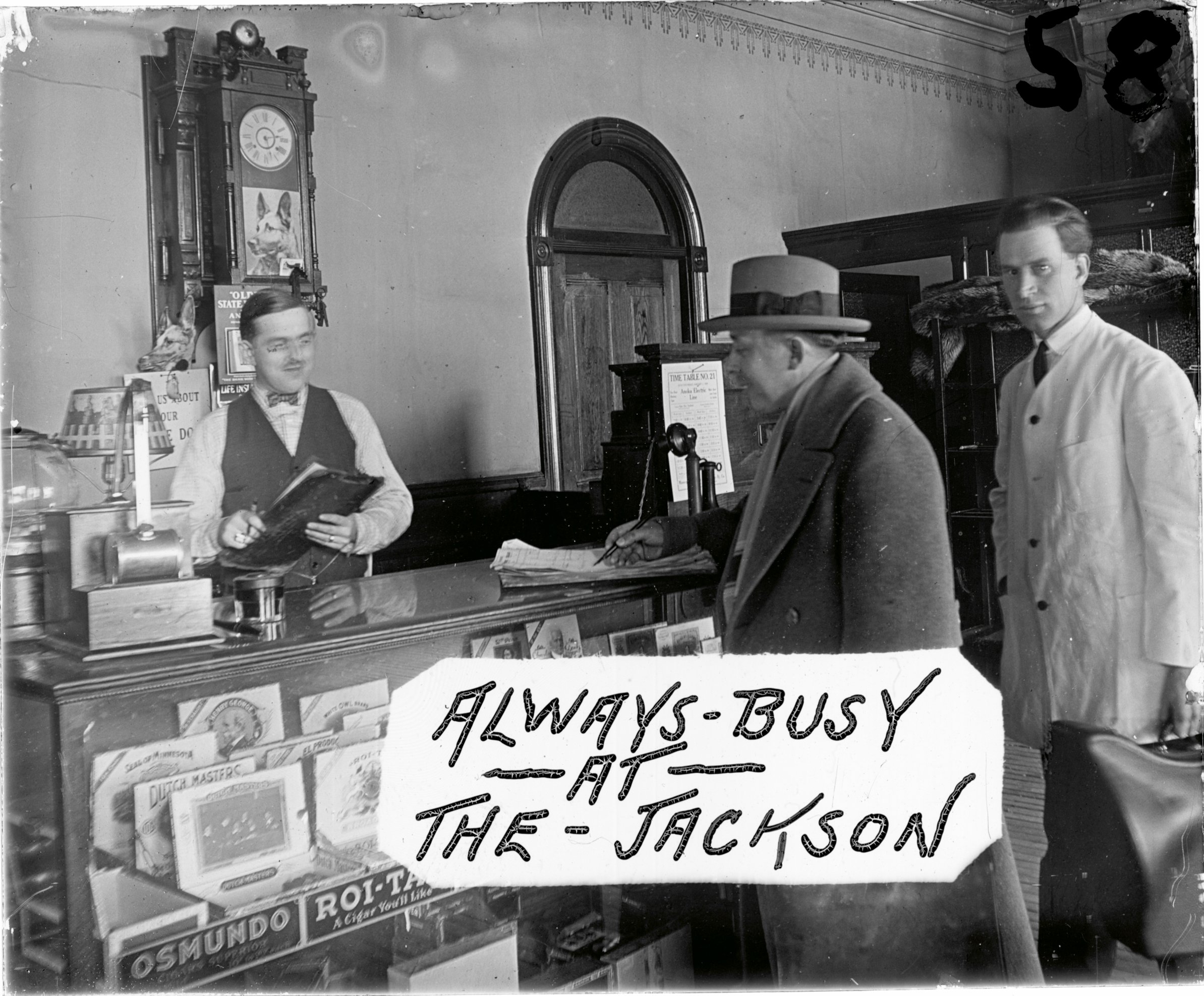 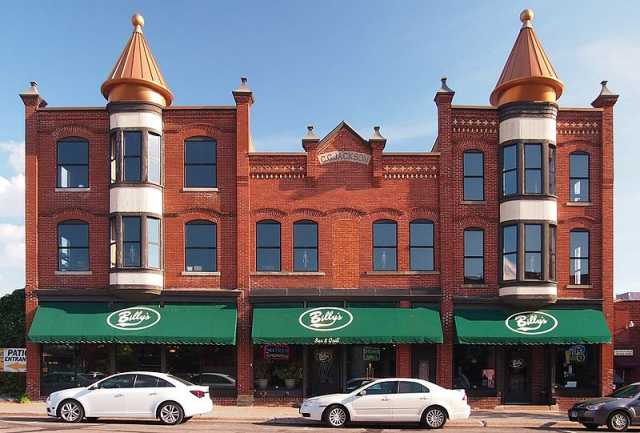 Swedish immigrant Charles G. Jackson arrived in the United States in 1866 and settled in Michigan. Soon afterward he moved to St. Paul, Minnesota, where he married Lettie Everson in 1876. A year later, he and Lettie relocated to Anoka and bought the Anoka House—the city’s oldest hotel. It quickly became popular with loggers and other laborers working in and around Anoka County. As Anoka industrialized, the hotel attracted new guests, including entrepreneurs, entertainers, and tourists.

A fire destroyed Jackson’s original hotel along with several adjacent buildings on August 16, 1884. Within a month, a new hotel rose from the ashes and was fully completed by the year’s end. It is this second structure, bearing his name etched near the building’s peak, which remains standing in the twenty-first century.

In 1896, Jackson and his eldest son and manager, J. F. Jackson, made further upgrades to the hotel by adding a sewer line that ran from the hotel to the Rum River “in order to provide every sanitary convenience.” They removed bathrooms from the lobby to make for a larger and more pleasant area and added new toilets and baths to the basement. By 1904, they had built a slightly larger, matching addition on the east side of the building that featured private bathrooms. By this point, the three sections facing Jackson Street were nearly symmetrical, with small differences in dimensions and patterns. The bay windows were capped by two identical copper-topped cupolas.

For decades, the Jackson Hotel stood at the heart of Anoka’s commercial district as a vital part of Anoka’s ability to host farmers, loggers, traveling salesmen, campaigning politicians, itinerant photographers, entertainers, and tourists. Under the management of the Jackson family, the hotel earned a reputation as the leading hotel in the city and one of the best in Minnesota. Its staff provided fine cuisine and hospitality, adopting the motto, “Nothing is too good for our guests.”

The Jackson Hotel attracted weekend tourists to Anoka as well as civic and business groups from the greater Twin City metro area, who used it as a banquet facility and small convention center. According to a family memory, the dining room could seat up to 200 people for dinner. Beyond hotel services, the Jackson also featured a cigar store, pool and billiard tables, a waiting room for ladies, a smoking room, and a confectionery. In 1894, an optician from Minneapolis set up his practice in the Jackson.

After operating for ninety years, the Jackson Hotel was sold in 1975 to a private developer. Afterward, several rooms were converted into apartments for year-around residents. On December 8, 1978, the building was added to the National Register of Historic Places.

Anderson, June. “The Rise and Demise of the Jackson Hotel.” ABC Newspapers, October 5, 2015.

ABC Newspapers. Rise and Demise of the Jackson Hotel. http://abcnewspapers.com/2015/10/05/anoka-county-history-the-rise-and-demise-of-the-jackson-hotel

ABC Newspapers. The Woman who Saved the Jackson Hotel. http://abcnewspapers.com/2015/10/20/part-i-the-woman-who-saved-the-jackson-hotel