Named after the company that built it, T.G. Richards & Co., the Richards Building is the oldest surviving brick building in the state of Washington. Two business partners of the company built it in July 1858 with the intention of using it as a store to sell goods to miners who were starting to make their way to the Fraser gold fields in British Columbia, Canada (gold was discovered there in 1857). The building is also historically significant for its simple, yet utilitarian Classical Revival architecture, it was later used as a courthouse, meeting hall, post office, and church. Added to the National Register of Historic Places in 2003, it appears to be undergoing a second phase of restoration as of early 2020.

The Richards Building, erected in 1858, is the oldest brick structure in the state. 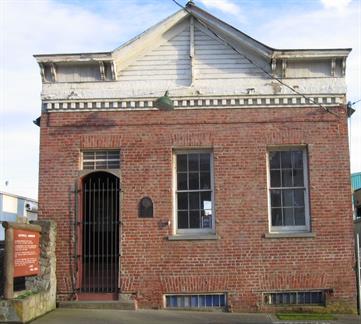 Miners had been searching for gold in the Fraser fields for a few years before they finally found some in 1857. A shipment of 800 ounces of gold arrived in San Francisco where it was to be minted. News of the discovery spread quickly and during the following Spring and Summer, droves of prospective miners headed north and passed through Bellingham on their way to the Fraser River. Merchants like Richards and his partners saw an opportunity to make a lot of money from the miners, who would need food and supplies. Not surprisingly, many of these businessmen were veterans of the California Gold Rush (1849) and were eager to make money once again.

The partners of the T.G. Richards & Co. were brothers Thomas and Charles Richards, and John Hyatt. Charles and John made the trip to Bellingham from San Francisco, where the company was based. Charles and Hyatt were among the first merchants to arrive in Bellingham. The Richards Building was initially used as a warehouse before becoming the general store (the partners first built a wood building that they used as the store during the construction of the brick building).

Unfortunately for the partners (and other businessmen in the town), the boom generated by the rush faded quickly. Not long after the Richards Building was completed, the governor of British Columbia ordered that miners must go to Victoria on Vancouver Island to sign permits to mine on the Fraser River. As a result, the miners left and many businesses in Bellingham went bust. However, T.G. Richards & Co. store survived and continued to operate for four years before selling it to Whatcom County in 1863, at which point it became as a courthouse—the first brick courthouse in the county. It also housed the offices of the county treasurer and assessor. Courthouse functions moved to a new building in 1890 and the Richards Building was used as a meeting hall for an organization for Civil War veterans (the Grand Army of the Republic).

Other organizations used the building after the Grand Army left in 1922. In the 1940s and early 1950s, Jehovah's Witnesses worshipped here. In the decades that followed, it became a taxidermy business, woodworking shop, pottery studios, the home of a counterculture newspaper, and an outdoor store. Efforts to begin to restore it began in the early 2000s under the direction of the Whatcom Historical Society.