This twenty-one-story skyscraper was completed in 1929 and stood as Atlanta's tallest building until 1954. The building was designed by real estate investors J.J. Haverty and A.G. Rhodes who made their fortunes in the furniture business and had previously formed a retail partnership. The building was financed by the Rhodes-Haverty Investment Company and was completed in the same month as the stock market crash of 1929. The Depression stalled but did not reverse the city's growth and the building has been home to numerous tenants over the past century and now serves as the home of Marriott's Residence Inn. 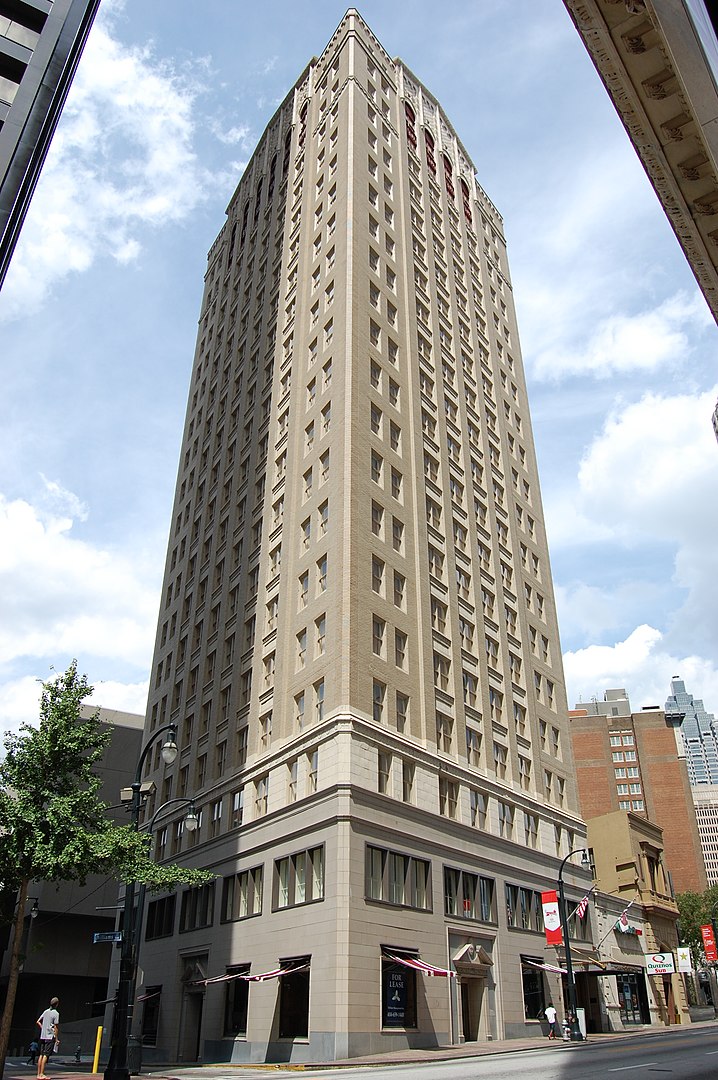 A.G. Rhodes and J.J Haverty, two prominent Atlanta furniture retailers and investors, developed the building that stood as Atlanta's tallest skyscraper during the middle part of the twentieth century. The Rhodes-Haverty Building represents a transition in skyscraper development in Atlanta from the Beaux-Arts eclecticism to modern forms that prevailed by the mid-twentieth century.

Amos G. Rhodes (1850 - 1928) moved to Atlanta in 1875 from Kentucky after the Civil War, having worked in his home state as a farmer and as then as a laborer for the L & N Railroad in Atlanta. Rhodes built his fortune by opening a series of furniture stores. He opened the first store in 1879 and then eventually operated more than twenty-two stores throughout the Southeast. James Joseph Haverty (1858 - 1939) was born in Atlanta in 1858. By 1885, Haverty organized the successful furniture retail outlet, J.J. Haverty and Company. Both men also participated in numerous church, community, government, and philanthropic endeavors.

Haverty and Rhodes merged their operations in 1889, forming the Rhodes-Haverty Furniture Company. In 1891, J.J. Haverty and the company headquarters moved westward to St. Louis, Missouri, for three years where the company expanded and built new showrooms. J.J Haverty returned in 1894 and continued to open more stores. Ten years later, the duo opened a grand flagship store in Atlanta. In 1908, the two dissolved their furniture-business partnership and divided the stores. Nevertheless, the two continued to work as investors as part of the Rhodes-Haverty Investment Company leading to the naming of this Atlanta skyscraper.

Planning for the Rhodes-Haverty Building began many years before actual construction. The Rhodes-Haverty Investment Company petitioned the mayor and General Council of Atlanta in 1924 to clearly fix the location of the lot bordered by Peachtree Street, James Street (now Williams Street), and Forsyth Street. With the lot defined, loans were able to be obtained to construct a modern, fireproof office building. Construction began in 1928 but by that time A.G. Rhodes had passed away.

The building opened in October 1929, just as the Great Depression took hold over much of the nation. Atlanta's airport, Candler Field, opened in 1930 as the nation's third-largest transportation center behind New York and Chicago. The Depression stalled growth and construction of new projects, but it did not reverse the city's growth and Atlanta remained the home of the largest financial institution south of Philadelphia as Robert W. Woodruff brought about a three-bank merger to create the First National Bank.

The Rhodes-Haverty Building stands twenty-one-stories tall making it the tallest skyscraper in Atlanta from 1929 through 1954. The building possesses a steel frame with an exterior comprised of buff-colored brick, granite base, and a geometrical, Terra Cotta trim on its upper floors.

The Rhodes-Haverty firm owned the building until 1946 when they sold it Georgia Properties Company. The building changed hands a few times over the next decades and is now home to Marriott's Residence Inn.