The John C. Calhoun State Office Building is notable for its architecture and association with one of the most dramatic events in the state's political history. In the fall of 1935, Governor Olin D. Johnston ordered the South Carolina National Guard to occupy the building, which housed the State Highway Department. The Department became one of the most powerful state departments in the 1920s and 1930s. After failing for months to remove the department's Chief Highway Commissioner, Ben Sawyer, and the other commissioners, Johnston decided to use the National Guard to forcibly remove them. In the end, however, Johnston lost what had become known as the "Olin-Ben War" and the Department gained even more power. In terms of design, the five-story, I-shaped building, which was erected in 1926, is a fine excellent example of Renaissance Revival architecture. It features a limestone exterior, Doric pilasters (columns), a cornice with roaring lion heads, and a two-story brick and limestone rooftop pavilion with Ionic pilasters and brick arches. The building was added to the National Register of Historic Places in 2011.

Built in 1926, the John C. Calhoun State Office Building is an excellent example of Renaissance Revival architecture. In 1935, it was occupied by the National Guard in the governor's attempt to curtail the power of the State Highway Department. This event was one of the most notable in the state's history. 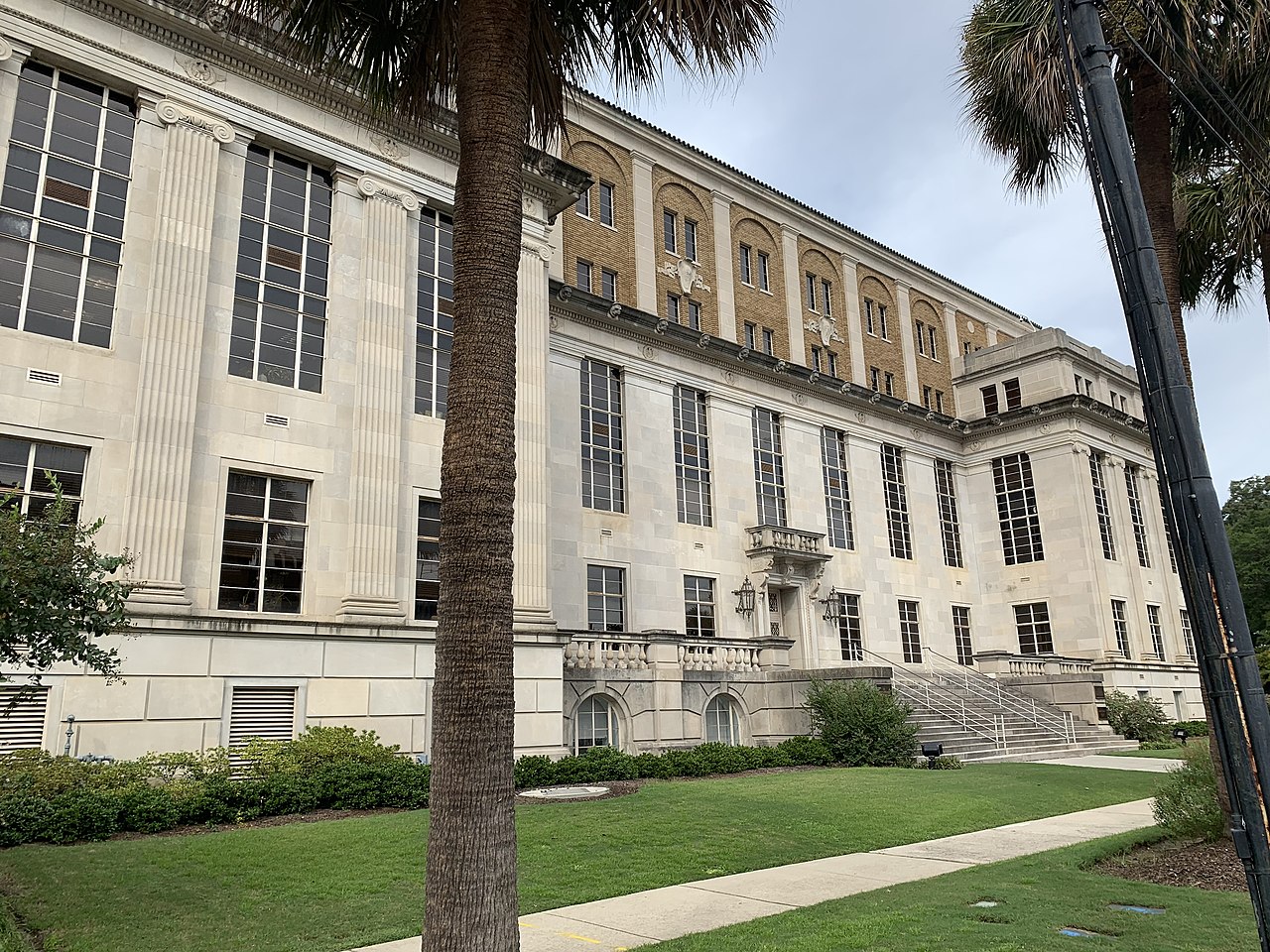 In the early 1920s, it became clear that a new government building was needed to house the state's departments, including the State Highway Department, bureaus, and courts. While many of these were located in the nearby State House, others were located in rented spaces throughout the city. Noted South Carolina architect Harold Tatum, who was living in Columbia at the time, was hired to design the new building. Another architect, Milton Medary, was hired as a consultant. Construction began in 1925 and the building was completed the year. It is named after South Carolina politician John C. Calhoun, who served as Vice President under Presidents John Quincy Adams and Andrew Jackson.

The Highway Department, which was already becoming powerful in the early 1920s, didn't want to move into the new building. In fact, it wanted its own new building but this request was denied and, in response, initially refused to help pay for the proposed building. Eventually it agreed to contribute to the project.

Between 1926 and 1940, the Highway Department grew significantly under the leadership of Ben Sawyer, who became Chief Highway Commissioner in 1926 (the commission oversaw the Department). Sawyer was determined to improve the state's roads, which were mostly unpaved and in poor shape. In order to pay for the work, a bond bill was proposed in 1929 and Sawyer supported it. The bill eventually passed and by 1932 the Department had sold $50 million in bonds which was much larger than the state's $8 million dollar budget. Olin Johnston, who served as a state representative before he became governor in 1935 (he served until 1939; he also served a second term from 1943-1945), opposed the bill from the start, believing that the Department would become even more powerful. The rivalry between he and Sawyer began.

When Sawyer campaigned for governor in 1934, he pledged to fire Sawyer and restructure the Highway Commission. Johnston called for Sawyer and other commissioners to resign in his inaugural address but they did not. Sawyer's allies in the State House also defeated an attempt to reorganize the Department through legislation. Johnston even vetoed Sawyer's salary as part of the appropriations bill but the Commission found another source from which to pay Sawyer. Then in September and October, Johnston replaced three of commissioners with allies, declaring that the three previous commissioners' terms had expired (he also charged three others with illegal behavior). However, the state Supreme Court ruled that the new commissioners could only be approved after a hearing.

Finally on October 28th, Johnston activated the Columbia National Guard to occupy the building and remove and replace the Highway Commission. He justified this move by arguing that the Highway Commission was causing a "rebellion" against the state. In response, the federal government stated it would freeze all highway funds for the state until the situation was resolved. In addition, the state Supreme Court froze all Department funds while it determined whether the new appointments were legal. The state Supreme Court ruled on December 5 that the appointments, including the new Chief Commissioner, were indeed invalid and ordered the reinstatement of Sawyer and the previous commissioners.

However, Johnston did not give up. He didn't order to National Guard to leave and suspended the commissioners again. He called a special session of the legislature and a compromise was reached. A temporary commission was established and the troops finally left on December 20th. Sawyer became Chief Commissioner again by February 1936 and the in April, the state Supreme Court nullified Johnston's removal of the commissioners.

The event had ramifications for the rest of the country. It established the legal precedent that elected officials are not allowed to resolve political or civil disputes using military force.