Guernsey's most well known museum. Set in beautiful gardens with exotic plants. The museum tells the story of Guernsey's history and folk law. It has a Discovery Room for children as well as an art gallery featuring famous Guernsey artists. It has temporary exhibitions, a small cinema and a cafe. 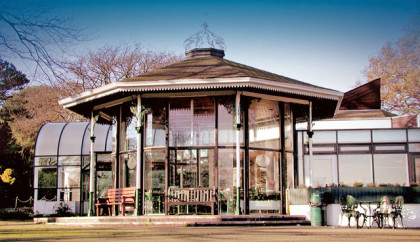 Everyone calls Guernsey museum, Candie museum, but it is run by the States. When tourists come to Guernsey, they think Candie museum is a “Museum of sweets”.On a good year, around 19000 people come to the museum.There are three exhibitions at the museum each year, and after each one the museum gives back the artefacts or lends them onto other museums or collectors. Exhibits usually come from the museum store or from other museums, sometimes they buy in artefacts. There are Japanese swords that belong to Eric De Samaurez, one of the descendants of James Samaurez in the recent exhibition. Before Candie Museum was built in the 1970s, this area was an auditorium where bands such as The Beatles played. Tommy Cooper and other people performed here, they were very big names in the day. In 2018, the Museum had some props belonging to the film, ‘The Guernsey Literary and Potato Peel Society’. The actress, Lilly James, and the composer of the film’s music, Alexandra Harwood, also came to Guernsey in connection with the film.