Mather Hall has and continues to be a staple of Trinity College. Although it is best known as the only dining hall on campus, it also houses a coffee shop, post office, school book store, offices, meeting rooms, and much more. It resides on the south side of campus, near the Jones and Elton Residence Halls, and faces the school library and Crescent townhouses. It was renovated around 1988 to include the many offices and places to eat that students now frequent every day. 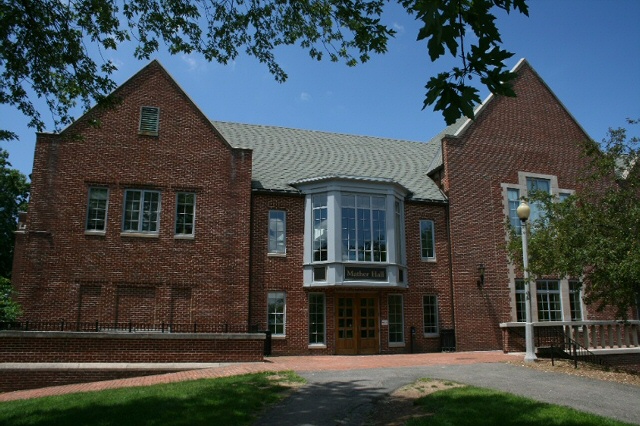 A 1927 Trinity Tripod Article describes the information of the namesake of Mather Hall, William Gwinn Mather '77 who offered Trinity its (then) new Chapel. "Mr. Mather" as he is called in the article, is the descendent of "one of the most famous Mathers in colonial days", Cotton and Increase Mather, who were "two eminent Puritan divines". His family spurred his intense devotion to the Mathers, and inspired him to donate to the "spiritual life of his college" through the Chapel. He was born in Cleveland, Ohio on September 22, 1857 and received a M.A. degree from Trinity College as well as being a brother of the Psi Upsilon fraternity, and then went on to study at Kenyon College

Mather Hall seems to have been quite the hotspot for social activities, as a Trinity Tripod Article from October 22, 1960 explains new plans for "Widely Varied Activities to Enliven Mather Hall". These plans include a dance for freshmen and non-fraternity men and live bands and singers who will be performing jazz and classical music on Sunday afternoons. Additionally, the article unveils how there will be billiard matches against faculty members and free films, which will all be "common sights" in the weeks ahead since the article was published. The same article also writes of the multiple dances coming up, including a party on Military Ball Weekend (12/10/1960) and a "Soph Hop Weekend" (11/12/1960). Trinity appears to have offered numerous exciting events for students to experience, as recitals performed by the Low Madrigal Group of Cambridge, Mass and the Budapest String Quartet and Hartford Symphony String Ensemble were offered with a small fee.

The 1988-89 Student Handbook gives the details of the renovation of Mather Hall which took place that year. Included in these renovations of William Gwinn Mather Hall, which was considered the "Campus Center", were the new student dining hall, a lounge titled the "Wean Lounge", a snack bar which is called "The Cave", and a coffee house named the Underground which is frequented quite often today. Additionally, there were game rooms added in these renovations, as well as a Post Office, Bookstore, Women's Center, and a headquarters for the Student Government Association. A large assembly hall called the Washington Room resides on the second floor, the handbook describes, as well as the Rittenberg Lounge and Alumni Lounge.