The South Dakota Air and Space Museum is situated on Ellsworth Air Force Base, near Rapid City, South Dakota. The museum's mission to preserve vintage military aircraft, missiles and other aircraft-related artifacts like models, and to honor the memory of aviation veterans who have served in various conflicts, and to educate the public about military aviation history. The museum displays thirty aircraft on display from World War II bombers to the modern B1B Lancer. Aircraft are housed inside the museum and outside on the museum grounds. The museum also houses an aviation hall of fame and offers various educational programs.

Located on the South Dakota School of Mines and Technology campus, The Museum of Geology was established in 1885, the same year the school opened. The museum contains thousands of fossil and mineral specimens. The surrounding area in all directions has been a treasure trove of fossils and the school and museum have taken full advantage of the location. Collections include fossils of mammals, marine reptiles, fish, invertebrates, plants, and dinosaurs from the Jurassic period and other eras. The mineral collection is comprised of specimens from all over the world. The museum is house in O'Harra Hall, which also serves as the administration building for the School of Mines campus. The James E. Martin Paleontology Research Lab is also located at the museum; it is a separate entity but works in conjunction with the museum.

3. The Journey Museum and Learning Center

Established in 1997, The Journey Museum and Learning Center is a natural and cultural museum in Rapid City, South Dakota. It contains collections from four of the state's museums: the Museum of Geology at the South Dakota School of Mines and Technology, the South Dakota Archaeological Research Center, the Sioux Indian Museum, and the Minnilusa Pioneer Museum. It is a good place for visitors to get acquainted with South Dakota's history, from billions of years ago to today. The Museum of Geology Collection at the center tells how South Dakota was formed over billions of years and contains fossils that can be touched by the public. The South Dakota Archaeological Research Center collection displays artifacts covering 10,000 years, from the peoples living in the Black Hills region after the ice age to the more recent mining period. The collection from the Minnilusa Pioneer Museum consists of illuminated story walls that cover the history of European settlement in the Black Hills region and the conflicts with Native Americans that resulted. The Sioux Indian Museum collection explores Sioux traditional and contemporary culture. The collection includes various Sioux artwork, clothing, and other materials. 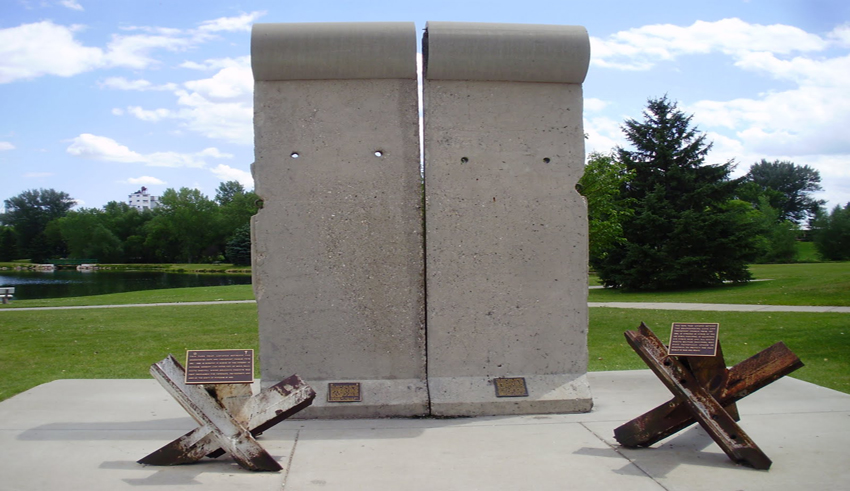 The Berlin Wall Memorial is one of the more unique and interesting historical sites in Rapid City. Located at the western end of Memorial Park, the memorial features two sections of the Berlin Wall, which separated East and West Berlin, Germany from 1961-1989, two iron "tank traps," and several interpretive signs with photographs that describe the history of the wall. The side of the wall that faced East Germany is plain concrete; the other side, which faced West Germany, still has graffiti on it. 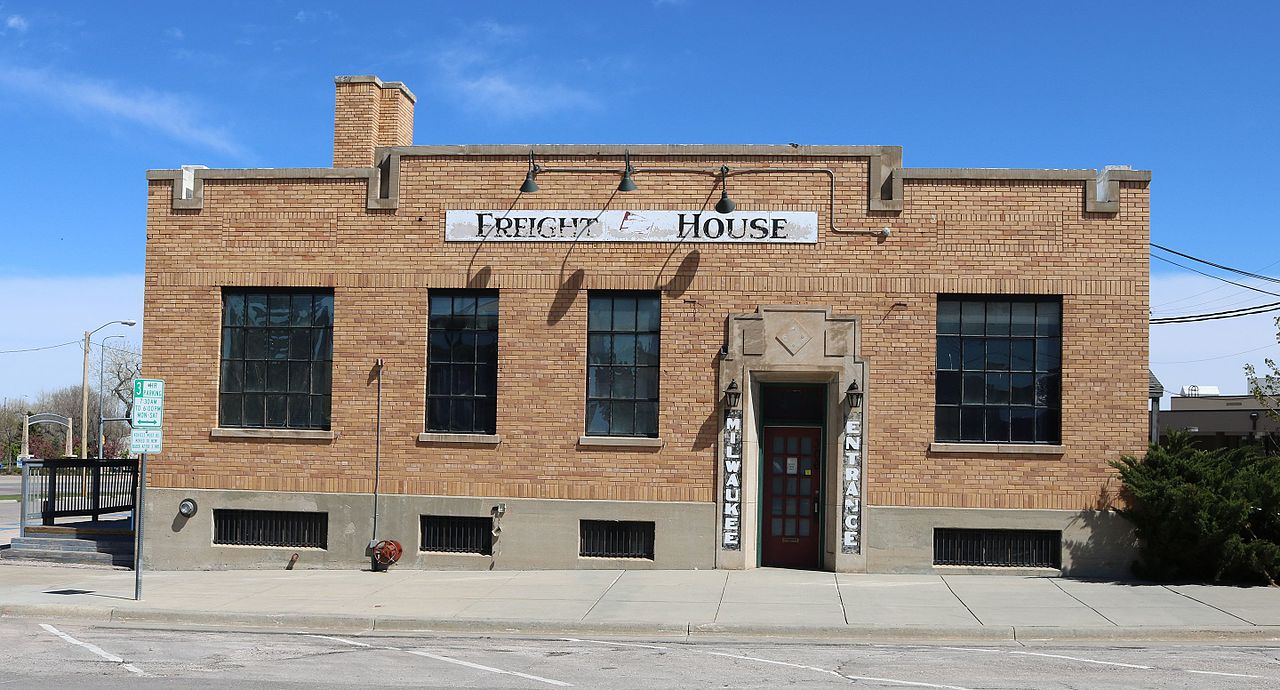 The Milwaukee Road Freight House is a single-story, historic railroad building in Rapid City, South Dakota. It was built by the Chicago, Milwaukee, St. Paul and Pacific Railroad—also called the Milwaukee Road—in 1923 as a place to store and ship freight. Today, it is the home of Sandford's Grub and Pub restaurant. It is one of the last and well-preserved railroad buildings remaining in Rapid City. 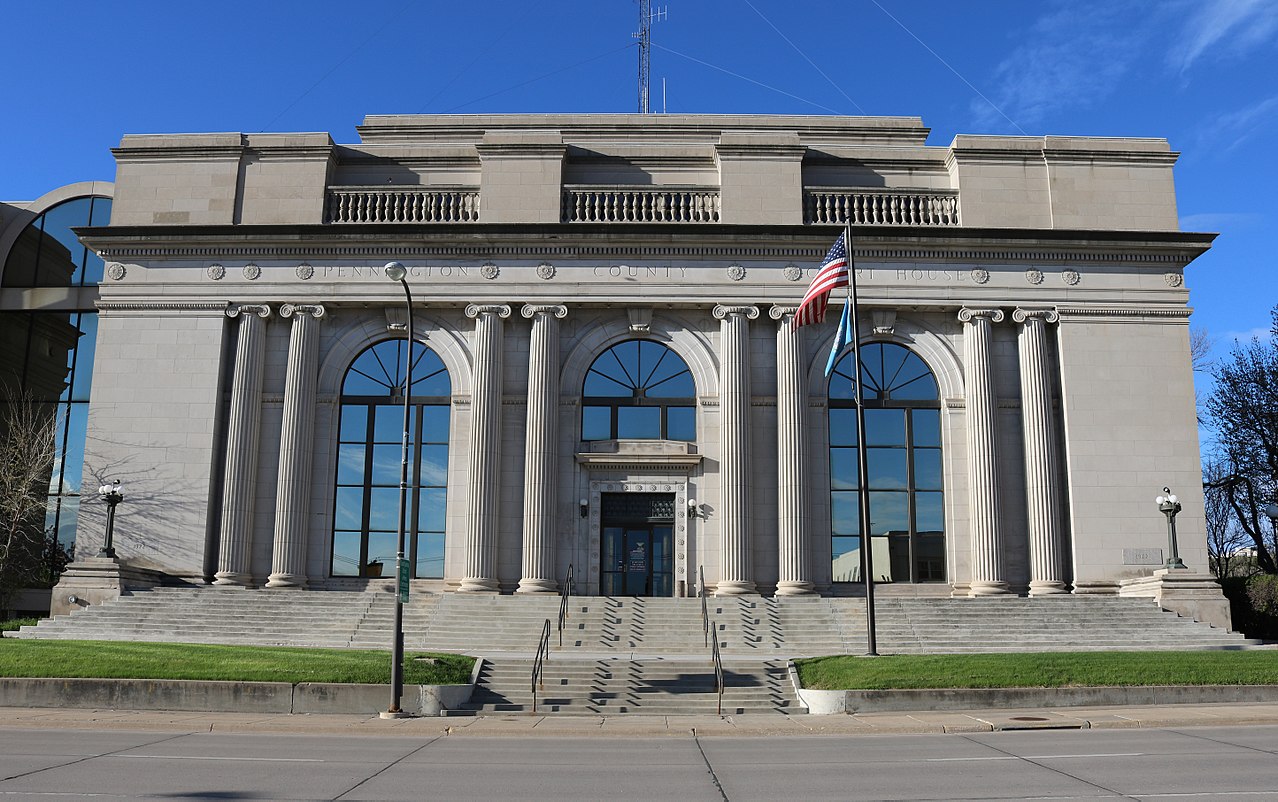 Erected in 1922, the Pennington County Courthouse is one of Rapid City's most striking landmarks. Architecture firm W.E. Halse and Company designed it in the Beaux-Arts style and in fact, it is the city's only example of this style. Indiana limestone covers the building's exterior, which features eight Ionic columns and three two-story arched windows.

7. Chapel of the Immaculate Conception

Faith Temple Church is a historic church located in downtown Rapid City. Originally known as First Congregational Church, it was built in 1914 and was home to the first organized congregation in the city. It is also a good example of Renaissance Revival architecture. The building features stained glass windows and a large, vaulted interior worship space. 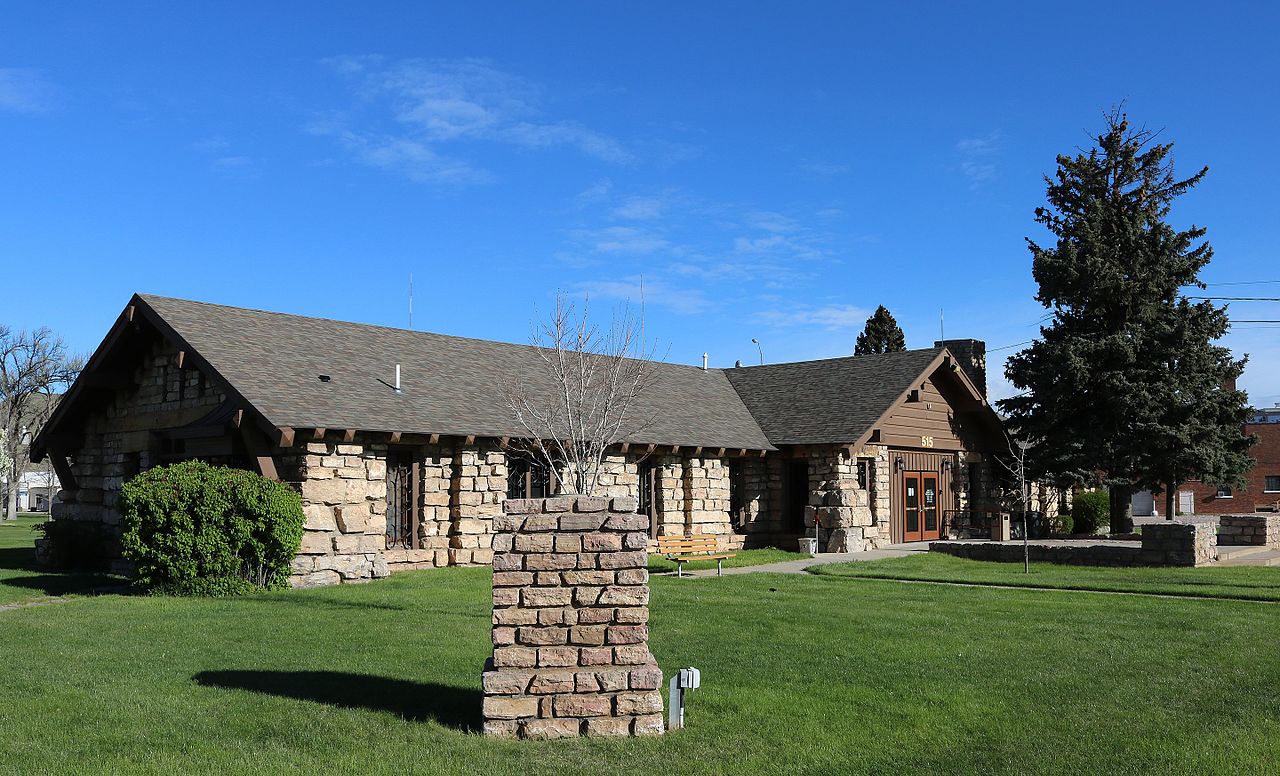 The Rapid City Parks and Recreation Building is a historic structure built in 1938. Added to the National Register of Historic Places in 1988, the building is significant for its vernacular rustic architecture and association with the Works Progress Administration, which built it. Before the parks and recreation department moved in, the building housed two museums, the Minnelusa Pioneer Museum and the Sioux Indian Museum. 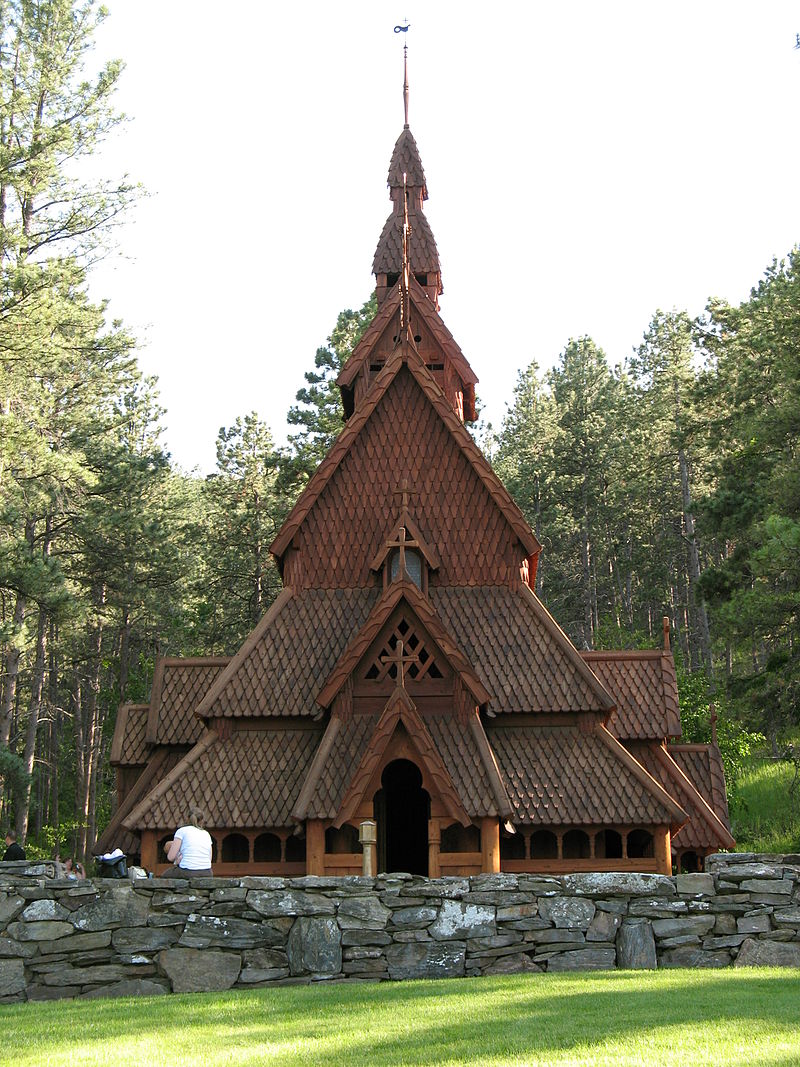 Built in 1969 by Dr. Harry Gregerson, The Chapel in the Hills is a historic Lutheran church located in Rapid City, South Dakota and east of Black Hills National Forest. It is an exact replica of the Borgund Stavkirke chapel in Norway. Today, it draws between 20,000 and 25,000 visitors a year and hosts over 100 weddings each year and other services. It was placed on the National Register of Historic Places in 2012. 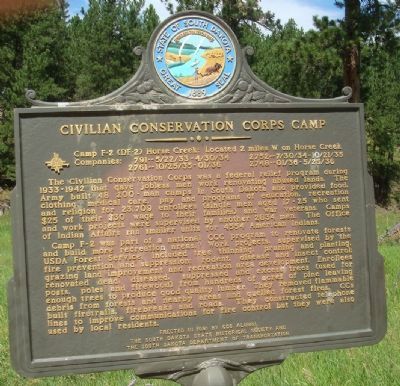 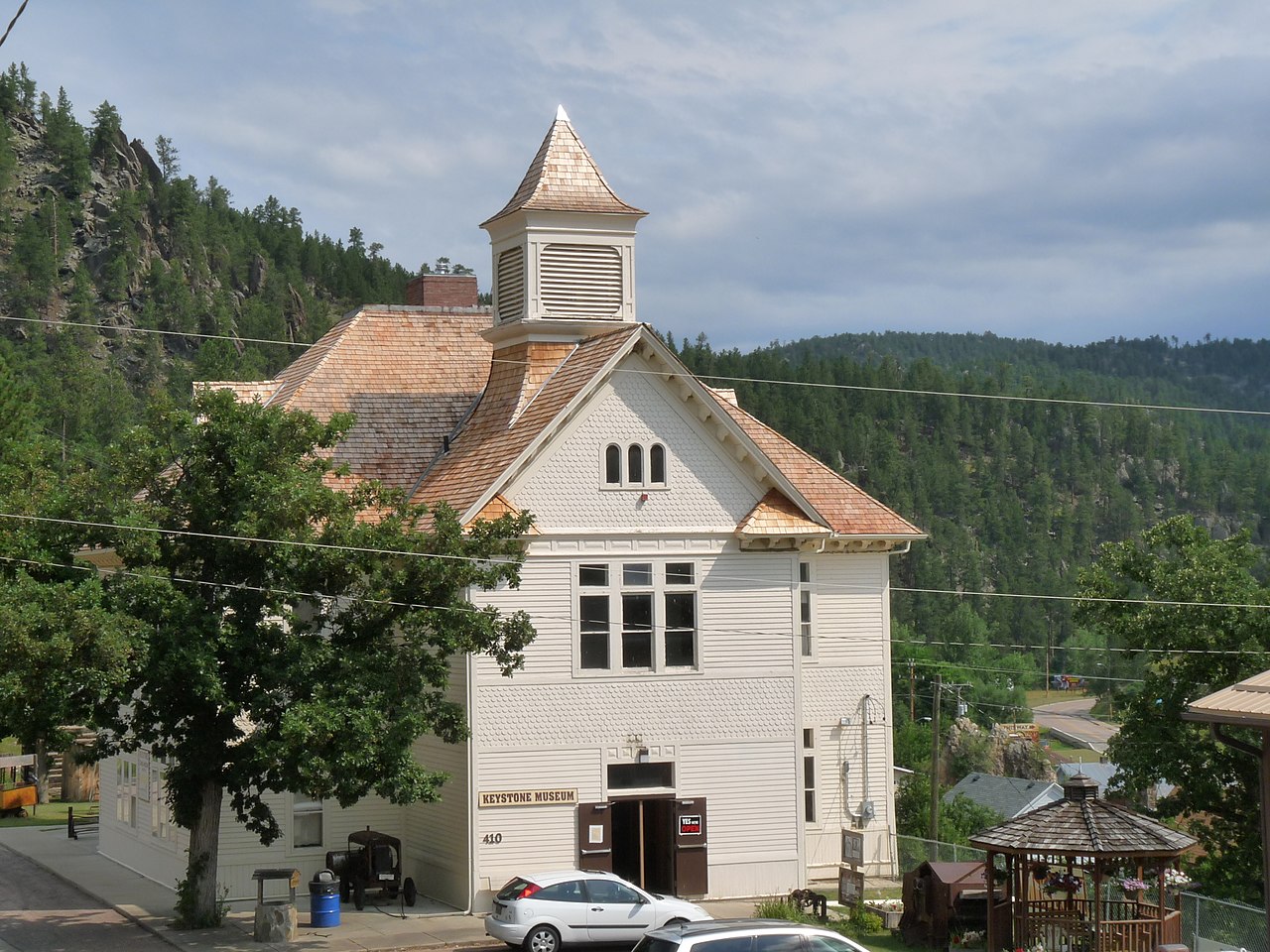 Located in the historic 1899 Keystone Schoolhouse building, the Keystone Historical Museum preserves and promotes local history. The museum features numerous items on display including mining tools and artifacts, photographs, rock and mineral collections, old rolltop desks, antique furniture, an old organ, and a bathtub once used by President Howard Taft. The second floor still has classrooms that have been left in tact. The school operated until 1988. 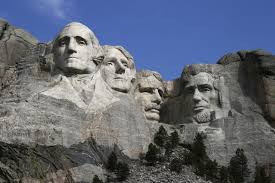 Authorized on March 3, 1925, the monument of Mount Rushmore is used to represent the nation’s birth and development as a country. The presidents carved into the granite were initially started by Gutzon Borglum to increase tourism in the Black Hills area of South Dakota. During the build, 400 men and women labored through dangerous work to create what is now one of the most popular tourist attractions in the nation. Today, the 60 ft heads of George Washington, Abraham Lincoln, Thomas Jefferson, and Theodore Roosevelt stare out from Mount Rushmore representing how far the nation has come since the declaration of its independence from Britain. There is even a memorial park that houses this monument and visitors can look from an outlook post to check it out. 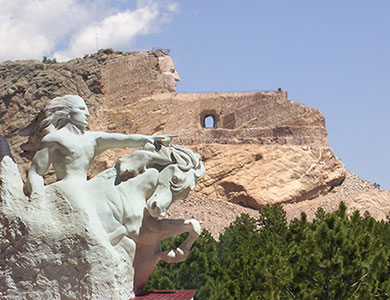 Began in 1948, the Crazy Horse Memorial is a planned sculpture and monument to the Lakota warrior Crazy Horse. Crazy Horse Monument is located in Black Hills, South Dakota. The Black Hills were Native American’s hunting grounds and it was also sacred ground and territory of Western Sioux Indians, including the Arapaho, Kiowa, and Cheyenne. Also, part of the land was inhabited by the Crow. In 1955, a Public Bill was passed by the House and Senate which authorized the Crazy Horse Monument to be constructed and placed in the Black Hills. This bill allowed Crazy Horse to be recognized national wide in honor of the Native Americans. At the Lakota Chief Standing Bear's request, Korczac Ziolkowski became motivated to construct a monument in commemoration of the Crazy Horse. Although the Crazy Horse Memorial was built in respect for the Native American people, the idea sparked controversial debates as many members of the Lakota community found the monument very offensive. Today, the memorial complex consists of the monument of Crazy Horse (still under construction), the Indian Museum of North America, and the Native American Cultural Center. The Crazy Horse's face was completed in 1998 and when completed, the monument itself is estimated to be approximately 641 feet wide and 563 feet high. The project is funded by donations and revenue from the visitor's center. Tours to the museum begin with a historical presentation about the memorial titled Dynamite & Dreams.

Bear Country USA is a unique opportunity for people driving through the Black Hills area of South Dakota. This conservation site allows you to drive though a park to see enclosures and encounter many different types of animals. Dr. Dennis Casey and his wife Pauline opened Bear Country USA in August 1972. They started out with 11 Black bears, one cougar, one wolf, three buffalos, and one large bull elk. Their main purpose for this attraction was to provide a place where the people of Rapid City could enjoy animals. Over the years the number of animals living at the park have grown. Now there is around 200 acres filled with Black and grizzly bears, plus 20 other species of North American animals. Now owned by Pauline Casey and 3 of her children, this family has dedicated much time to opening up a place where people can come and appreciate the animals that are in their home areas. Most of the animals are born on the premises and are hand raised by the park staff. They make a few exceptions to accepting animals off of the reserve. 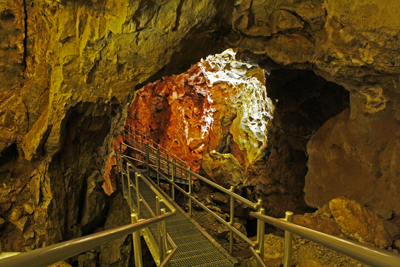 Established on February 7, 1908, as a National Monument. Jewel Cave stretches across an area of around 1,273 acres making it the third longest cave in the United States. With over 180 miles of charted and plotted passages, this underground wilderness charms to human curiosity. Its impressiveness is revealed through fragile formations and previews of brilliant color. Its intricacy of passages tempt explorers, and its scientific wealth remains a mystery. This resource is truly a jewel in the National Park Service.