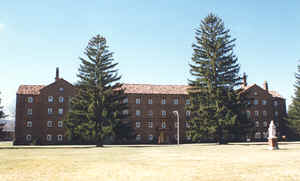 Devereux Hall is the main dormitory on St. Bonaventure University’s beautiful campus. It is named after Nicholas Devereux, who contributed 200 acres of land to help bring Franciscan missionaries to the underprivileged area surrounding the university. This, along with the Franciscan influence greatly inspired the construction of Devereux Hall in 1927. The building was designed by Oakley and Schlamo who built the building with “The most enduring of materials.” This massive dormitory can house over 500 students when it is utilized to its maximum capacity. The building is designed to look like a 16th century Spanish Monastery in a style known as Italian Transitional Style. This design was chosen on purpose as an attempt to emulate the era when the Franciscans were best known for their missionary work throughout the New World.

The exterior of Devereux Hall is adorned with beautiful ivy plants and numerous plaques that reflect the values of St. Bonaventure University. Some of these plaques include plaques for Mathematics, Music, Grammar, Ben Franklin, Cardinal Gibbons, Olean, Ellicottville, and New York State. These plaques all reflect an individual element that is crucial to the make up and beliefs of the University. Devereux Hall has remained the heart of student residential life since its construction in the 1920s. The building has been home to many controversies that helped the university evolve and grow with the time, such as becoming a co-ed dorm and the rumors of an exorcist in the building. Devereux Hall is icon of St. Bonaventure University and the University would not be the same without it.

The interior of Dev when it was first built was quite different than what it is today. The original color scheme was brown and white, St. Bonaventure's school colors (Cummings). Two parlors were placed in what would be the west wing corner to greet family, friends, and other visitors. Each floor had a suite of rooms to be used for prefects' offices and living rooms and the east wing contained an infirmary ("St. Bonas"). On the second, third, and fourth floors, the students could live in either single or double rooms (Callahan 451). Each room came with a large mahogany desk and dresser (Cummings). From the 1930s to the 1950s, the infamous fifth floor housed the football team.

After the friars moved into the new Friary (now Doyle Hall) in 1961, the east and west wing lounges alternated as recreation and storage areas. There were a few attempts to convert the fifth floor into a lounge after the football team moved out, but to no avail. The roof leaked, the students complained it was too far away, and the bad omens associated with the fifth floordiscouraged some students.