The Paint Creek labor strike was one of the largest and bloodiest confrontations between miners and coal operators the state of West Virginia had ever seen. It led to the arrest of over 200 unionized miners and Mother Jones herself. To this day it is one of the largest armed conflicts between labors union rights for miners the United States has ever witnessed.

Gathered rifles and other material from strike (1912) 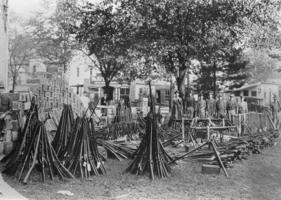 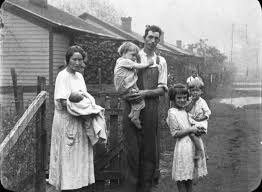 On April 18, 1912 miners pleaded with their supervisors and the coal operators of the Paint Creek Mine for an increase in payment and healthy working conditions. This plea would fall on deaf ears and be rejected their proposal. The strike that would follow, led by the unionized miners, would be one of the most dramatic labor conflicts seen in the state of West Virginia. The strike would spread in the local area like a flood. It would reach other mining sections, like Cabin Creek, along the Kanawha River. The growing problem faced with the miners on strike was that these sections had not unionized.

This became the nucleus of the issues that the miners would have. Though fair wages and equal payment were important in the impoverished state, the number one focus was unionization. They needed more people to rally to their cause and they demanded that the United Mine Workers of America to play as their arbiter. They had hoped this would bring an end to the mine guards and Blacklisting this was emplaced by the coal barons who sought control and order in this situation. The mine operators would drive out anyone who unionized with the help of hundreds of Baldwin-Felts agents in a belief that this was some queer tactic by their competitors from the Midwest to ruin business in the mountain state. The coal operators would even bring in nonunion miners to replace those who fought for their rights.

Coal camps soon became war camps, as many miners acquired weapons of their own to fight against apposing DA agents, machine gun encampments, and mine guards. With the help of the 86-year-old miners’ rights activist, Mother Jones, and the Social Party, the unionized miners were ready for war. The miners knew the area better than the agents did, so guerilla warfare played into their favor when the battles at Mucklow, Dry Branch, and Eskdale pulled both sides into armed conflict; unfortunately, both sides would face significant casualties. In February 1913, Governor Glasscock would implement martial law in this territory, even though there was a peacetime emplaced. This led to the arrest of the 200 plus miners who fought to end their enslavement and the determined Mother Jones herself. The Paint Creek Junction at this time was too heavily occupied by the large number of miners who were arrested, and many had to be imprisoned in cabins, train stations, company stores and even a church that a pastor swore loyalty to the coal barons. Mother Jones was being held in a cabin close to the mouth of Paint Creek and was guarded by two armed soldiers.

When Governor Henry D. Hatfield took office in March 1913 his first action would be to create a settlement on the strike of Paint Creek. He pardoned the majority of the miners but the most influential of their party would stay in jail. He also sent National Guard personnel to close down the Socialist newspapers in all of Charleston and neighboring Huntington. The U.S. Senate would later create an investigation in West Virginia state government to understand the causes of the strike of 1912. The miners, however, would develop plans of their own. Frank Keeney and Fred Mooney would be elected as president of the labor activists and secretary-treasurer for the 17th district of West Virginia, and would lead the coming conflicts in the approaching decades.