As the biggest cemetery in Indiana, Crown Hill Funeral Home and Cemetery has solidified its place as one of the most historically prominent cemeteries in the state. Beyond this, its location in the state's capital offers it a unique ability to be easily accessible to most people in the state and out-of-state visitors. The cemetery is the final resting place for many prominent figures in Indiana's history, and the large plot of land allows for soldier monuments and more. This cemetery is home to rigorous upkeep and rituals to keep the memories of those buried here alive. 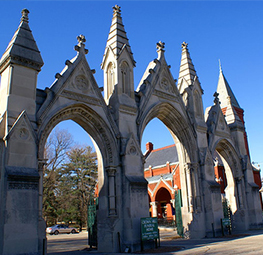 This cemetery lies in downtown Indianapolis and is the largest cemetery in Indiana. The cemetery was first purchased in 1863, with its first burial occuring in June of 1864, according to Crown Hill Cemetery’s official website. This plot of land has many notable figures in Indiana history buried here, including President Benjamin Harrison, Governor Oliver P. Morton, and poet James Whitcomb Riley. The cemetery has been evolving since its purchase in 1863, with plot prices and maintenance being a source of concern, causing the release of this notice in the Indianapolis Daily Herald on May 28, 1867: “The Directors of the Crown Hill Cemetery, after carefully considering the subject in all it’s bearings, have concluded to advance the price of Burial Lots. [...] [T]he minimum price of lots will be 25 cents per square foot, and maximum price 50 cents per square foot, varying according to size and location” (Indianapolis Daily Herald). The cemetery has also been used for Memorial Day celebrations throughout the decades, remembering the many soldiers that have been interred there. An example of this comes from The Indianapolis News, May 29, 1900: “Everything is in readiness for Memorial Day to-morrow. Crown Hill cemetery, where an extra force of men has been at work for days, is as beautiful as it has been for many years. [...] At the firing of the first gun by the Indianapolis Light Artillery, which will have a firing squad stationed in the court-house yard, the column will move at 1:30 o’clock” (The Indianapolis News). This shows the advancement of the cemetery through its early years, and how like many cemeteries, it is the home and practice of many important rituals to remember those who have passed. The cemetery is considered a rural cemetery, meaning it is a larger plot of land away from the center of the city, designed to help control overcrowding, and to provide a place of beauty for people to admire. According to James R. Cothran and Erica Danylchak, authors of Grave Landscapes: The Nineteenth-Century Rural Cemetery Movement, the cemetery became a place where commonplace Americans could be exposed to the arts: “Before there were public art museums in America, [rural cemeteries] served as an extensive exhibit space where sculptural works were displayed for the public to admire. (Prior to the establishment of rural cemeteries, it was generally only the wealthiest class of Americans--those who had been on the grand tour of Europe--who had any exposure to academic sculpture)” (Cothran & Danylchak, 52). Crown Hill follows this same idea, where families can decorate their plots as they please, and visitors can admire the sculptures of headstones and the gardens as examples of what, when the cemetery was designed, was modern art available to those who had never witnessed it before. Take the entrance gate as an example.

“Program Completed for the Strewing of the Flowers on the Graves at Crown Hill Cemetery.” The Indianapolis News, May 29, 1900. https://access-newspaperarchive-com.proxyiub.uits.iu.edu/us/indiana/indianapolis/indianapolis-news/1900/05-29/page-12/crown-hill-cemetery?psi=38&pci=7&ndt=by&py=1900&pey=1909.