The Battle of Plattsburgh, also known as the battle of Lake Champlain, took place in early September of 1814, during the War of 1812. The British sought to gain control of Lake Champlain, during their campaign in the northern states. To achieve this, they launched a simultaneous attack and land and sea, with hopes of also taking Plattsburgh to assure their dominance on the lake. The Americans were able to win the battle at sea, discouraging the British from continuing the land battle. This victory for the Americans effectively ended the British northern campaign. 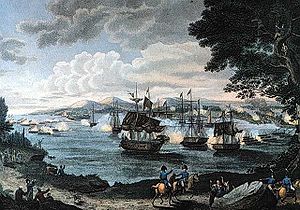 In early September of 1814, British General George Prevost launched a campaign to gain control of Lake Champlain.  To achieve this, he hoped to take the main American position in the area, at Plattsburgh. He arrived at his destination on September 6th, only to find the Americans had withdrawn over the Saranac River to a well defended heights adjacent to the city.  To take this position, Prevost would have to eliminate the American fleet under Captain Macdonough on the lake, in order to starve out the Americans on the heights. At the same time, Prevost would push a land assault across the Saranac, to take the American position.

The Naval battle pitted British Captain George Downie's 93 gun flotilla against Macdonough's 86 gun squadron.  The battle was intense, and raged for two hours.  Using difficult techniques involving anchor maneuvers Macdonough was able to claim victory, and secure a British surrender. The fighting had also claimed the life of British Captain Downie. By winning the fight on the lake, the American supply line maintained secure, insuring the land forces couldn't be starved out at the heights.

Meanwhile, Prevost launched his assault across the river, after a slight delay. This proved problematic, as the assault was suppose to occur simultaneous to the Naval battle. Prevost planned a two pronged attack, with a feint attack across the bridge, while his main force crossed at Pike's Ford to make an assault on the American left flank.  While the feint attack was easily repelled, he managed to get a brigade of his main force across the river. Despite this gain, Prevost called off the attack when he learned of the defeat on the lake. With the American squadron still at large, a victory on land would be pointless.  With this defeat, the British ended their campaign in the northern states, and the Americans gained a much needed victory.