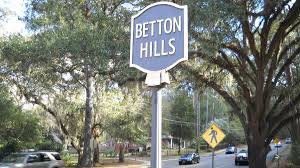 Turbot Betton arrived with family, including his father, in 1825 from Maryland. In 1826, he opened up a small general store with his father, Joseph Betton. Over the next 20 years, Turbot Betton became the most important retailer for the city and for surrounding plantations.  The Bettons owned at least three general stores by the end of the 1820s. Betton purchased 1200 acres from the Marquis de Lafayette, or his representative, and took possession of the land that lies roughly between present day Thomasville Road and Centerville Road and north from Seventh Avenue up to Potts Road encompassing Betton Hills as well as Betton Woods, Noble Drive, and Goose Pond on September 20, 1827. He built his home in the area near what is today the intersection of East Seventh Avenue and Lee Avenue. He became one of the more successful planters in the region holding as many as fifty-five enslaved persons according to the Leon County Tax Rolls of 1850.

Betton’s status within Tallahassee grew along with his wealth. In 1832, he helped found the Central Bank of Florida and was also elected to the city council in 1835.  Turbot Betton later became an investor and director for the first railroad in Tallahassee that ran down to the port at Saint Marks. At first the railroad attempted to use experimental steam engines but the cutting-edge technology kept exploding. Consequently, they reverted to using enslaved men to drive mule-cars loaded wit cotton, dry goods, and sometimes passengers.  Eyewitness accounts questioned the safety and construction of the railroad, however it operated from 1837 until the Pensacola and Georgia Railroad purchased the company in 1855. Betton was also one of the founders of St. John’s Episcopal Church and was a founding member and officer of the Florida Institute of Agricultural Antiquities and Science.

Turbott Betton passed away in 1863. His property ended up with members of the Winthrop family and Guy Winthrop eventually consolidated the family holdings and started to develop the property in 1936. Over the course of the next almost thirty years, Winthrop developed the land and sold the lots creating the Betton Hills neighborhood.