French Lick Spring was a salt-sulfur spring frequented first, for many centuries, by Native American hunters of many tribes. Later, French and English hunters and traders settled by the spring because of its water and attractiveness to game. As Nashville became a city, the spring was used as a water source, prized for its medicinal qualities, straight from the ground with no treatment. 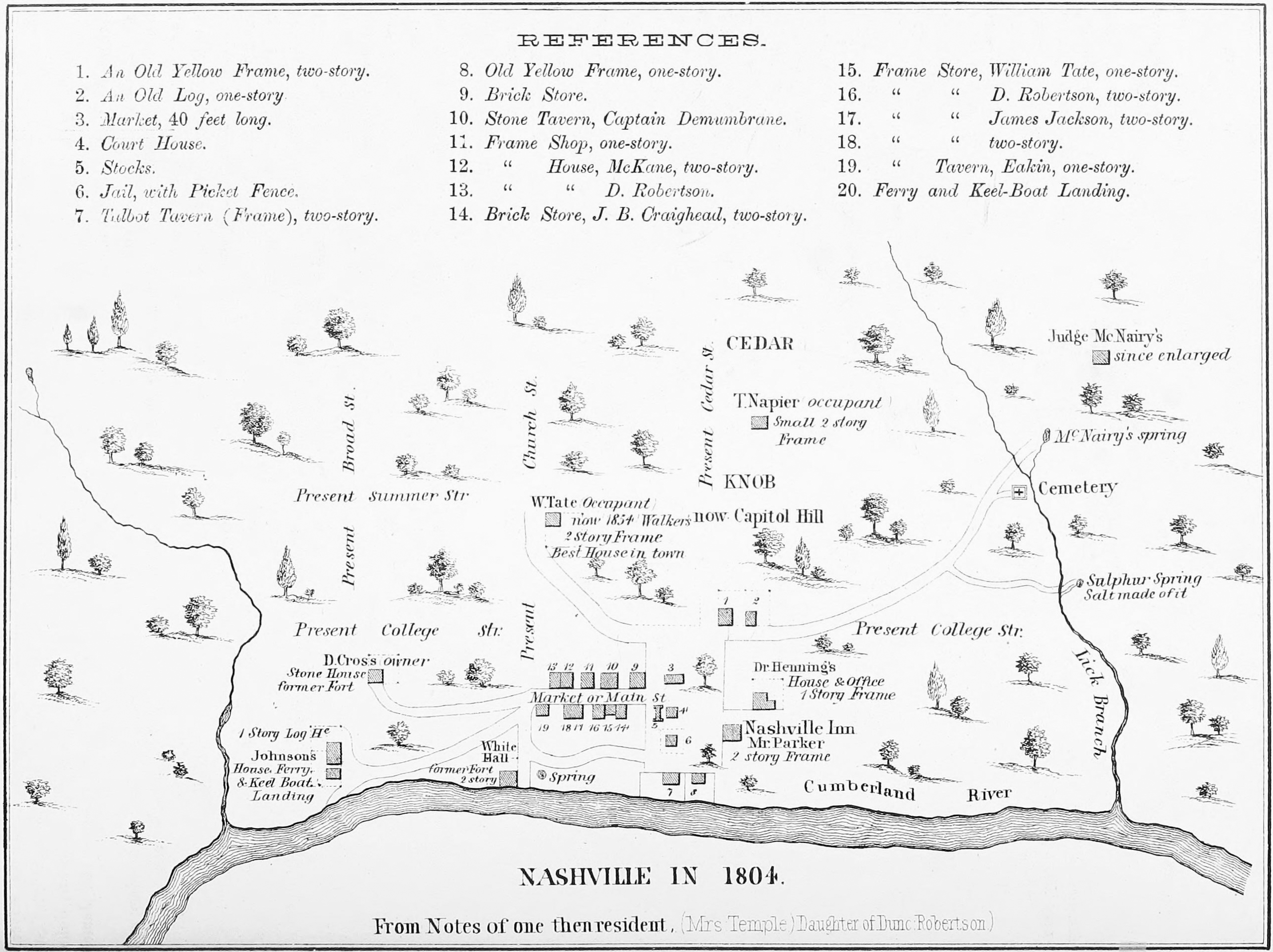 Early trading at French Lick, or the Big Salt Springs on the Cumberland River, involved all of the players in the imperial struggle of the eighteenth century. A natural magnet for wild game, French Lick had long attracted native hunters before French and English traders arrived. The territory between the Ohio and Tennessee Rivers was a hunting ground for many tribes. The Shawnees occupied the area in the seventeenth century, but by 1700, the Cherokees and Chickasaws were driving the Shawnees north. Traders from New Orleans and from the Illinois country came in to offer manufactured goods for pelts. James Robertson, leader of the Nashville settlement, is the source for the story that, by 1710, Jean du Charleville from New Orleans had made a deserted Shawnee fort at the French Lick into a warehouse. Charleville was thus in the vanguard of trade and imperial ambitions. French administrators hoped to hold the interior of North America with a line of forts from the St. Lawrence to New Orleans, and, in conjunction with Indian alliances, to withstand the pressure of English settlement advancing from the East. By the 1760s, however, long hunters from the British colonies had begun to penetrate the area; land speculators and settlers followed. The pioneers with Robertson reportedly found the cabin of Illinois trader Timothy Demonbreun still housing buffalo tallow when they arrived to claim land in 1779. These new settlers also traded in hides until settlement produced marketable crops and ultimately transformed French Lick into a Nashville neighborhood, found today near the site of the Bicentennial Mall.

The early settlers decided to call this place home, in part because of the abundance of water.  The first fort erected at Nashborough, the Bluff Station, was located on a high bank of the Cumberland river, near the beginning of Church Street, because of a large spring, called the Bluff Spring, at that spot.  Church Street was originally called Spring Street.  As these pioneers spread out to lay claim to tracts of land on which to live, finding a spring on property of interest was a priority.  It was not much of a challenge.  Davidson County was covered with springs, both large and small.  Many are still known today and some become very evident after a large rainfall.

At one time deer and buffalo searched out the area known by pioneers as French Lick Springs, and as the population began to grow, Nashville’s citizens made the former watering and trading spot their picnic and recreation grounds. Nearby was also a natural sulphur spring that people sought out, and residents filled their empty containers with the odorous liquid to use for its medicinal qualities or took a drink right from the spring at Sulphur Springs Bottom.