The Indianapolis City-County Building is the home to our capitals police force and thus is one of the stops along our tour of policing in Indiana. Home to both IPD which was the city's police department from 1884 to 2006 and now IMPD which combined the forces of the Marion County Sheriff's Department and the now-defunct IPD, this building has seen the capitals policing achievements and downfalls throughout the years. As our state's capitol we will be looking at this department specifically to give us an idea of the past. 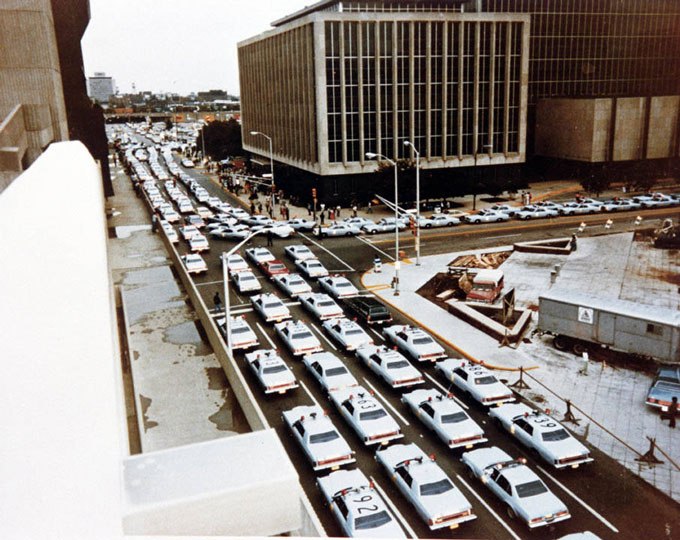 Before the Indianapolis City County Building which was built in 1962, the Indianapolis Police Department and other Indiana political agencies such as the Unigov and the Mayors office were housed in the Marion County Courthouse which use to stand where the plaza on the south side of the City County Building. With construction starting in 1959 the building was the first in downtown Indianapolis to be taller than the Soldiers and Sailors monument in the circle. Costing the city $22 million the building, built by Wright Porteous &Lowe/ Bonar, Lennox, Matthews, Simmons & Ford, Inc. and J. M. Rotz Engineering Co., has a whopping 28 floors and was the tallest building downtown until 1970. Filled with public services offices the City County Building is really the hub of foot traffic for anyone looking to do anything official downtown but it also serves a non official purpose. The 28th floor is dedicated to the public as an observation deck that allows citizens to look out over the city with plaques and power points that detail key points in the city's history.

I believe it is very important to highlight Indiana's capital while looking at the establishment and role of police officers and other entities charged with keeping the peace in Indiana over the years. I want to look at the creation and evolution of policing organizations and policies in different parts of the state of Indiana and the state's capital is an excellent place see these things. IMPD has served the community well since its beginnings in 2006-2007 but for this stop I want to mainly focus on IPD and its function as a unit of change in the police world in the past. From having the first women assigned to police cars to the formation of the world famous Indianapolis Police Department Motorcycle drill team. The Indianapolis Police Department was initially founded in September 1854 but after a few failed attempts the department was finally able to survive after its third attempt at organization in May 1857. it wasn't until 1862 that officers walked a real day shift. prior to that all police work had happened at night and 1864 saw the city divided into districts. In the early days the patrols were all done on foot and in starting 1897 bicycles were used for 'hot runs". These original riders were known as the "Flying Squadron". Horse patrols were implements around 1890-1900. It wasn't until 1904 that the department got its first version of an emergency vehicle but with the industrial bomb and technological innovations that came with the first World Was by 1929 the Indianapolis Police Department owned 60 police cars. In September 1968, the Indianapolis Police Department led the nation by being the first to assign women to police cars. Officer Elizabeth Robinson and Officer Betty Blankenship and their assigned Car 47 made history that September and pressured the rest of the country to eventually follow suit.