The Farmers and Mechanics (F&M) Savings Bank began in the 1870s in Minneapolis as the only mutual savings institution west of the Mississippi. The bank catered to laborers and merchants rather than commercial operations. Once located in a historic 1891 building that is listed on the National Register of Historic Places, the organization moved several times before completing this structure in 1942. When numerous businesses fled downtown for the suburbs during the 1950s and urban decay became prevalent around the F&M neighborhood, the bank decided to add to its 1942 structure rather than move, which started a movement of reinvestment in the city and helped it survive. Today, the building is home to the Westin Hotel. 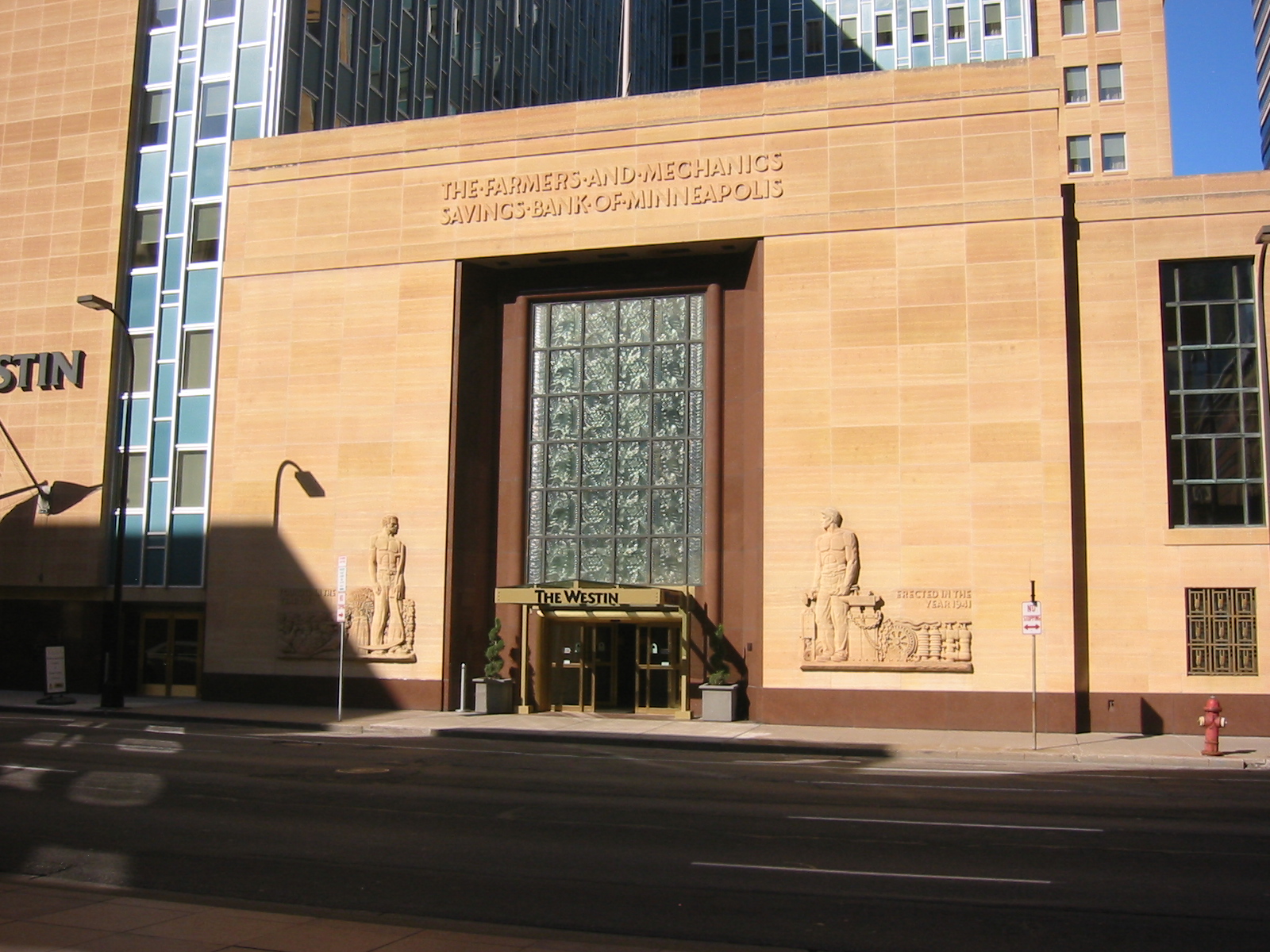 Image shows the original F&M entrance and 1960s expansion, which is now the Westin Hotel. 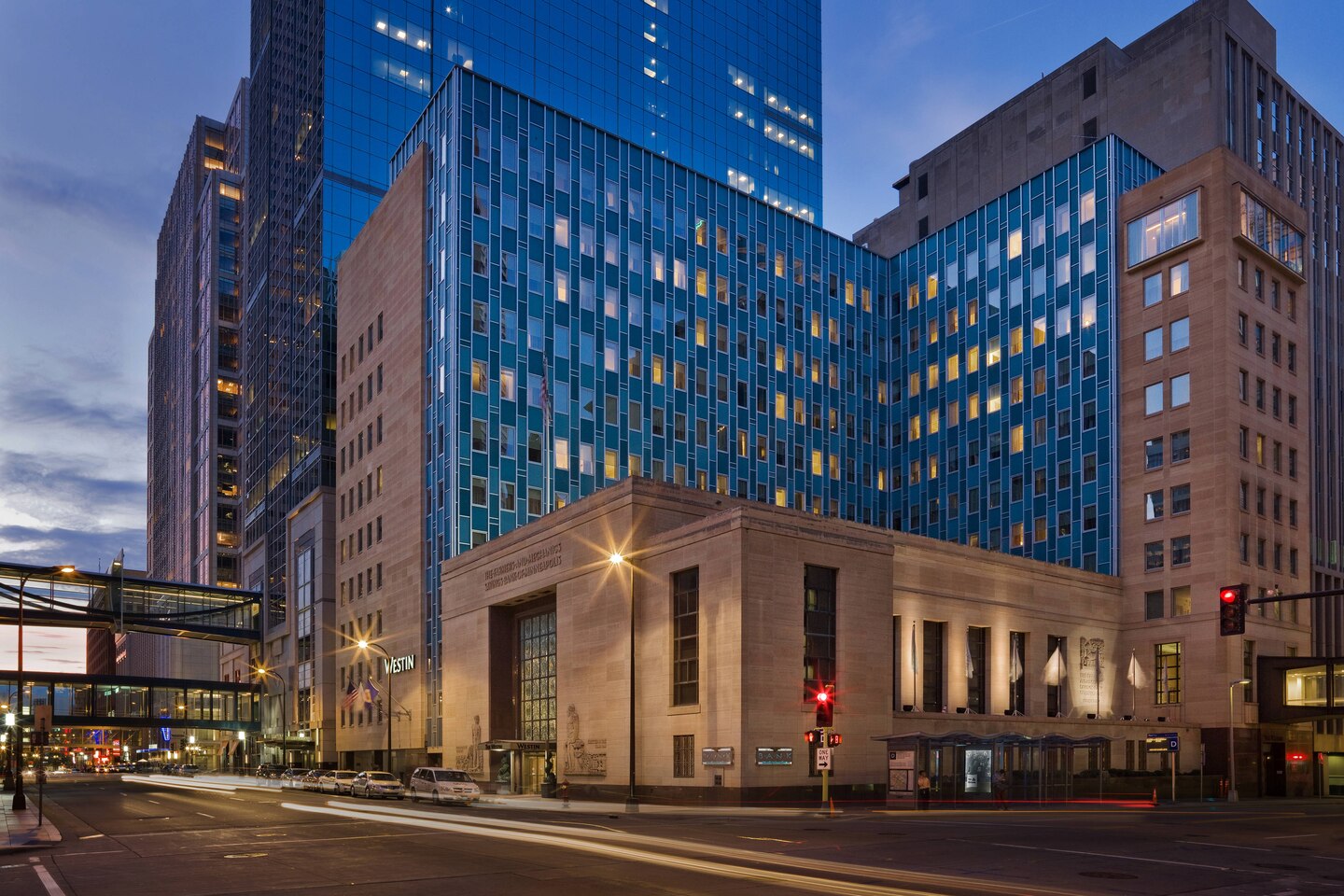 The Farmers and Mechanics (F&M) Savings Bank building opened in 1942, but the bank's history goes back to the 1870s. The bank owns a legacy as the state's only long-lived mutual savings bank focused less on entrepreneurs and more on laborers, and with a history that is intertwined with that of the city. The institution also played a significant role in the mid-twentieth-century urban renewal story.

Common to most quickly growing urban centers during the last half of the nineteenth century, population booms coincided with commercial construction and bank openings. A common theme among banks that emerged during the era, notably during the height of the "Gilded Age," involved their relationships with wealthy investors and entrepreneurs. F&M appeared in 1874 with a plan to serve mariners, merchants, laborers, minors, and other "working" occupations. F&M functioned as a mutual savings bank, arriving at a time when the mutual savings bank trend had gained momentum, with 771 operating by 1875. F&M stood as the only mutual savings bank in Minnesota (and west of the Mississippi) when it opened for business.

Serving laborers did not bring immediate success to the bank. Still, as Minneapolis grew into the "flour capital of the world" by the 1880s, laborers moved to the city in droves, and they conducted business with F&M; deposits increased from $300,000 in 1880 to more than $2 million in 1885.

As the bank grew, its need for larger office buildings arose. The bank opened new premises several times in the 1880s and 1890s. The bank's previous building was constructed in 1891 and is also listed on the National Register of Historic Buildings. But, the commercial center for the city trended southward away from F&M as the twentieth century progressed. By the 1920s, despite a broad economic boom for the nation and city, the bank found itself in an area of town abound in abandoned buildings and urban blight. The bank constructed in 1893 also showed its age. Thoughts of moving to another building had to be put on hold after the 1929 stock market crash and the Great Depression that followed it.

During the 1930s, the bank continued to function well, despite the economic decline that affected its clientele -- laborers -- the hardest. The bank succeeded partly because unlike large banks heavily tied to large businesses and high-risk investments, F&M built its reserves by investing in smaller ventures such as residential real-estate and municipal bonds. As a result of its vitality, the search for a new building commenced during the Great Depression. The bank took advantage of the Depression by purchasing the lot for which the historic building stands for $250,000; the land had previously sold during the 1920s for $750,000.

However, by the time the bank opened, just as World War II began, the "lower loop" that F&M had long desired to locate now found itself on a slow path of decline as the Great Depression and war efforts took its toll on the area. Yet, again, the bank found itself in a less than ideal location, from a typical business viewpoint. But, hope prevailed that the city would not allow blight to dominate the area as it existed as the city's commercial center for years. Before F&M arrived, Chicago urban planner Edward H. Bennett, a colleague of Daniel Burnham, issued a "City Beautiful" plan for Minneapolis in 1917. As well, projects such as the 1924 construction of the Nicollet Hotel, a 1927 expansion of a federal office building, and the opening of a post office in 1934 all served as private and public efforts to maintain the lower loop.

Urban blight still ravaged the downtown area, and numerous businesses fled to the suburbs during the 1950s -- a common activity in post-war America. During that same decade, F&M's growth forced them again to need a new home. The bank ultimately decided to invest in a massive expansion of its 1942 structure. Bank executives noted that they hoped to contribute to the re-investment of downtown Minneapolis. Not long after that, the nineteen-story Sheraton Hotel and a six-story office building for International Business Machines emerged, along with other smaller investments. Thus, the area found new life. Sadly, due to reasons beyond this entry's scope, the bank ceased to exist by 1982. Regardless, its choice to invest in the city proved to be its last effort in a long history of investing in people and regions that otherwise may have been forgotten by other banks and businesses.