What appears to be a simple local city library is actually a excellent example of the living nature of history. Here in one of the meeting rooms, The Union Benefica Mexican currently holds its meetings. The Union Benefica Mexican represents the most recent decedent of the efforts by the Mexican communities to create mutual beneficiary societies to help represent their culture in Northwestern Indiana. 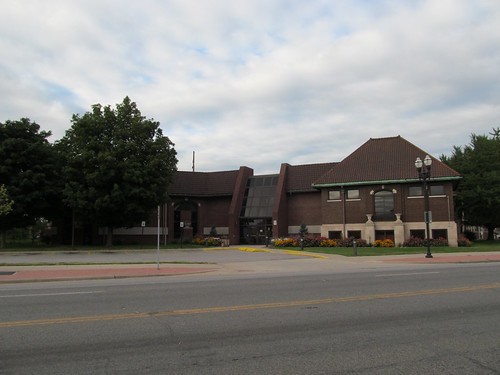 The Unión Benfica Mexicana is the modern incarnation of efforts of the Mexican American communities living in the Northwestern Region of Indiana to create an organization that would help represent them and preserve their shared cultural heritage. The Unión Benfica Mexicana was born “On July 8, 1956, in Indiana Harbor, the Sociedad Mutualista Benito Juárez and the Sociedad Mutualista Cuauhtémoc formally united to create the Unión Benéfica Mexicana.” As discrimination against Mexican Americans was felt by workers living the Region, early groups like La Sociedad Cuauhtémoc served as tools of political representation and resistance. These organizations helped Mexican Americans to fight for equal treatment. Isolated from white labor unions, these organizations also helped Mexican Americans working in the Steel Mills to fight for improved working conditions and pay.

Early Mexican immigrants to the Region were often men who had been brought to work in the mills. They typically left their families in other parts of the country, seeing their work in the mills as temporary. While families would be brought up later, this initial isolation from their loved ones and their culture led to a deep dissatisfaction. The organizations, that would later go on to form the Unión Benfica Mexicana, helped keep early Mexican migrants connected to their heritage by holding cultural celebrations and other events.

As intellectual refugees from the Cristeo Wars came to the Region, these organizations would even go on to host events such as an art exhibition by the up and coming Mexican Muralist David Alfaro Siqueiros. This arrival of a layer of the cultural and economic elite of Mexico lead to the development of a class divide that would go on to influence the beneficiary societies increasing competition that had already existed, “the groups often competed with each other in the services they offered.” The class divide would manifest in the beneficiary societies through the differences that would occur between the labor focused cultural societies and the groups like La Sociedad Cuauhtémoc.

However, these societies would also build unity in the Mexican communities of North Western Indiana. Various organizations in the Region would cooperate with local churches to help organize baseball teams and community events. All these groups would make efforts to keep Mexican culture alive in the communities preserving the cultural unity of the community as well.

Last updated by Benjamin (Instructed by eric sandweiss, Indiana University--Bloomington) on May 4th 2020, 5:57:34 am.