The Des Moines Municipal Building was built from 1909 to 1910. By 1910, Des Moines covered 65 square miles. The building came at a time of a new form of city government by commission, a progressive reform adopted in 1907. To not show favoritism, four architectural firms worked on the new municipal structure, chosen by the commissioners. The three-story building was constructed of brick faced with buff limestone on a concrete foundation in the Beaux Arts style. Des Moines City Hall was listed in the National Register in 1977. It was closed for two years for renovations and reopened in 2018.

1977 photo of Municipal Building by Porter for NRHP nomination 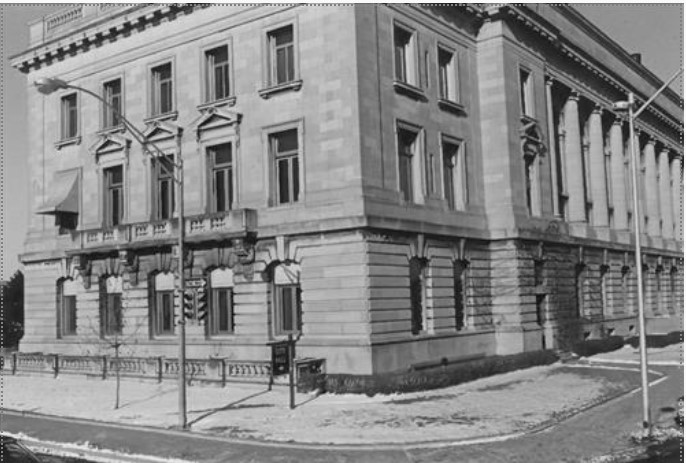 Des Moines Municipal Building was built overlooking the river; a sawmill had been built in this spot in 1850. Streets in this area later were raised three to four feet to give more protection from flooding. When a special election was held in Des Moines in 1907 asking if the government should be changed to a commissioner form, and whether a new city hall building should be built, four women attempted to vote but were denied. The Iowa Code had awarded women the right to vote except on the choice of office holders. The women sued the city and won their case in the Iowa Supreme Court in 1908. The 1907election was ruled invalid and another special election was held in 1908. The case, Coggeshall v. City of Des Moines clarified the rights of women to vote on matters of municipal finance.

The ground floor's segmentally arched windows have paired lights. Three centered doors provide exits on the east and west sides of the building; the east entrance features a three bay balcony. Above are two-story Doric columns and tall, arched windows. The whole main floor of the central block is one long, barrel-vaulted room; the "counting room" was intended to be open to the public to view the goings on of their local government. This was a reaction to the backroom deals and corruption of government by ward bosses in the late nineteenth century. The Des Moines Plan placed power in the hands of the economic elite, the business leaders. Marble floors and marble decorations plus elaborate plasterwork detail the interior.

The 29,000 square foot structure was listed in the National Register in 1977 with relevance in architecture, law, and governmental history. The building was closed for renovations from 2016 to 2018; the work added modernizations like daylight harvesting and a new elevator, while respecting the building's historic framework. Interior plaster, trim, and the antique lighting fixtures were restored.