Free Will Baptist Church of Pennytown

The modest one room place of worship is all that remains of Pennytown, a small freedman town established by Joe Penny, an escaped slave from Kentucky. At its height, around the turn of the century, Pennytown encompassed 64 acres, boasted 40 families, two churches, a school and a small business community. An Annual Homecoming held each August reunites former residents and descendents of families from Pennytown.

Free Will Baptist Church of Pennytown Before Restoration 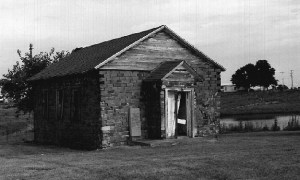 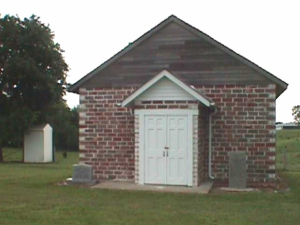 The Free Will Baptist Church of Pennytown, a one room structure listed on the National Register of Historic Places, is the last remaining structure that evidences the once thriving community of Pennytown.  Pennytown, located approximately 8 miles southeast of Marshall, MO, was founded in 1871 by Joe Penny, an escaped slave from Kentucky who used his life savings to purchase the initial 8 acreas to establish a place of refuge for recently freed slaves.  Penny paid $160 to white owner John Haggin for the land and had the title recorded.  At this point in the history of Missouri, it was rare for a Black person to have clear title to their land, but Joe Penny insisted that Pennytown residents hold clear title.  This helped them avoid the poverty trap of sharecropping in which most ex-slaves found themselves.

By 1900, the town had grown to 64 acres, 40 families, a school, two churches and several businesses.  The men found work in the fields of white plantation owners, but as paid labor.  Women over the age of 14 worked as maids, cooks and nannies, in the white homes.  The women who were too old to work provided childcare.  The town was an example of communal living, summed up by Josephine Robinson Lawrence, “Life was hard, but God was good” (Grace).

The Great Depression, automated farm machinery and World Wars I and II took their toll on Pennytown.  By 1943, the last family left Pennytown, leaving the town populated only by a few elderly residents who eventually died there.

After the end of World War II, Annual Homecomings were held to maintain the connections among the former residents and the descendants of former residents.  These gatherings were centered around the Free Will Baptist Church.  The original church was a frame structure built on land owned and provided by a white landowner in 1886.  Eight years later, the church elders purchased the land for $20.  In 1924, the wood frame building was burned and the present day block structure was erected in 1925-1926.

In the 1980s, the building was in a state of disrepair.  Former Pennytown resident, Josephine Robinson Lawrence began the process of getting the site included in the National Register of Historic Places.  Once she was successful in this campaign, she spearheaded the fundraising to make the necessary repairs to preserve the building, believed by many historians to be the last of its type in Missouri.  The building was added to the registery in 1988.  Mrs. Lawrence had raised approximately one-half of the necessary funds at the time of her death in 1992.  Her daughter, Virginia Houston, took charge of the fundraising.  The restoration was completed in 1996 and is maintained by the Friends of Pennytown Historic Site, a volunteer organization registered with the state of Missouri as a non-profit organization.