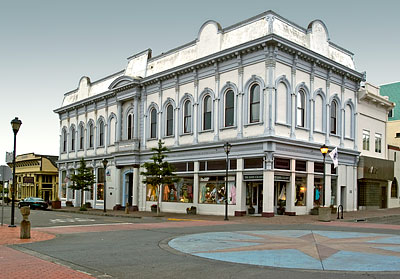 On the 91st anniversary of the founding of the IOOF in the U.S., members of eleven different chapters posed for a photograph on the steps of the Eureka Courthouse 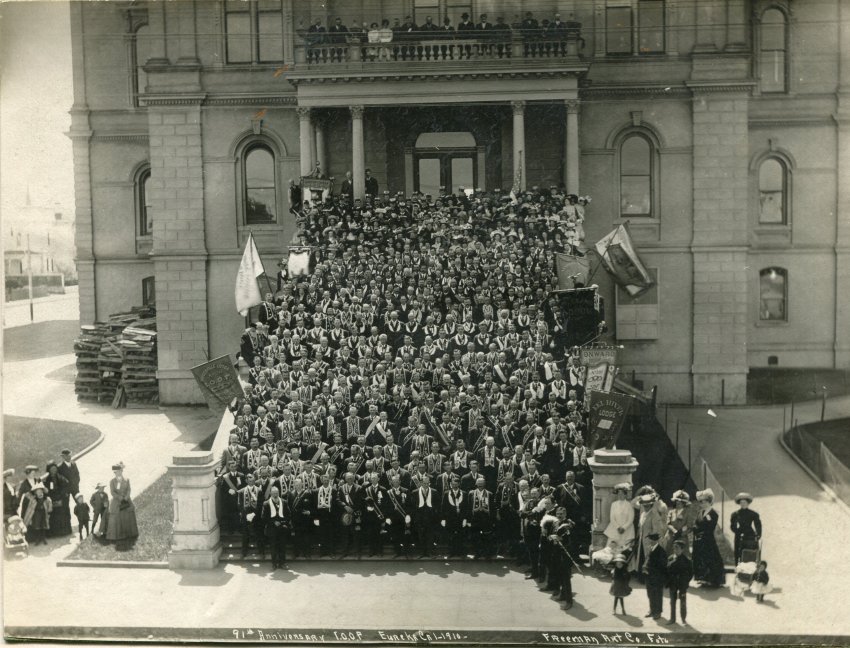 The International Order of Odd Fellows building in Eureka was constructed in 1883 in the Second Empire style, also called French Empire. This architectural style was inspired by the buildings which were commissioned by Napoleon III in Paris, France, between 1852 and 1870. The property features a mansard roof, which is the key feature of the Second Empire style. This large, two-story building was constructed in brick, with iron columns around the entrance.

The International Order of Odd Fellows (IOOF) originally began as a fraternal organization in seventeenth-century Europe to help others in need. At that time, altruistic community assistance was considered an odd or unusual concept, hence the name “odd fellows.” Historically, the mission of the IOOF was to "visit the sick, relieve the distressed, educate the orphan, and bury the dead."

The IOOF then spread to America during the early nineteenth century. The first North American branch of the International Order of Odd Fellows was established in 1819 in Baltimore, Maryland. The concept soon traveled across the country, eventually reaching the West Coast in 1859. During that year, the first Odd Fellows lodge on the West Coast was built in Arcata in Humboldt County, California. For several decades during the late nineteenth and early twentieth century, the IOOF also included a female auxiliary group called the Rebekahs. It was the first such female group in the U.S.

At one time, the city of Eureka hosted multiple lodges of the International Order of Odd Fellows (IOOF). However, the largest was the property built on F Street in 1883. The city also served as a meeting place for various IOOF chapters to come together. On the 91st anniversary of the founding of the International Order of Odd Fellows in the U.S., members of eleven different chapters gathered together in Eureka to celebrate the history of the organization. The members posed together for a commemorative photograph on the steps of the Eureka Courthouse, while dressed in regalia and waving flags and banners. Hundreds of members, along with their families and friends, were present on that day in Eureka. Afterwards, a celebratory parade with a marching band stretched for blocks throughout the city.