St. Louis Parish was established in 1868, although the church was not completed until 1871. The Sisters of St. Agnes taught at several iterations of St. Louis School beginning in 1879. The school merged with St. Patrick's School in 1970. In 2006, the church was sold and in March 2007, a fire destroyed the building.

St. Louis School with the twin spires of the church in the background, c. 1970. 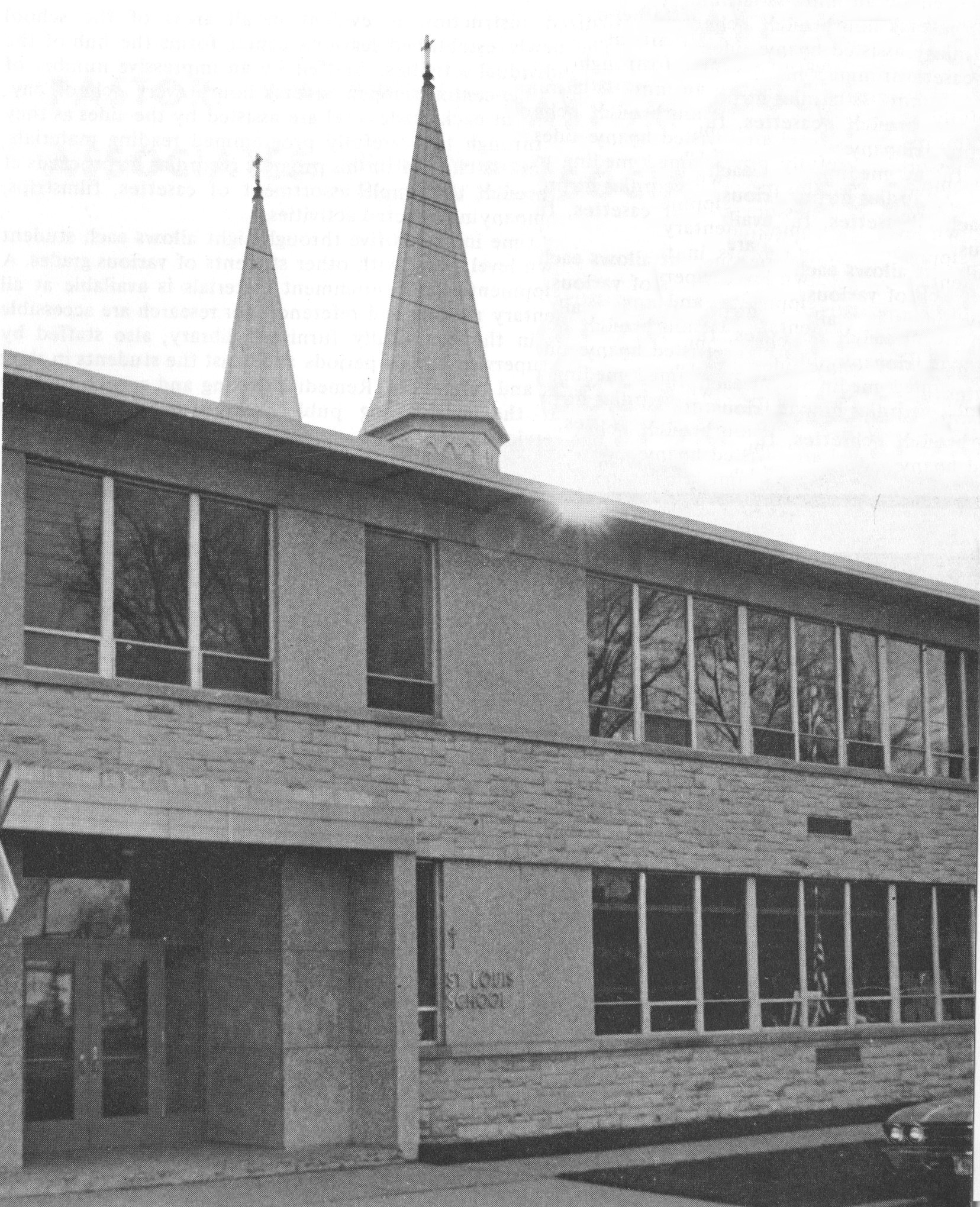 Students in the learning center at St. Louis School, c. 1970. 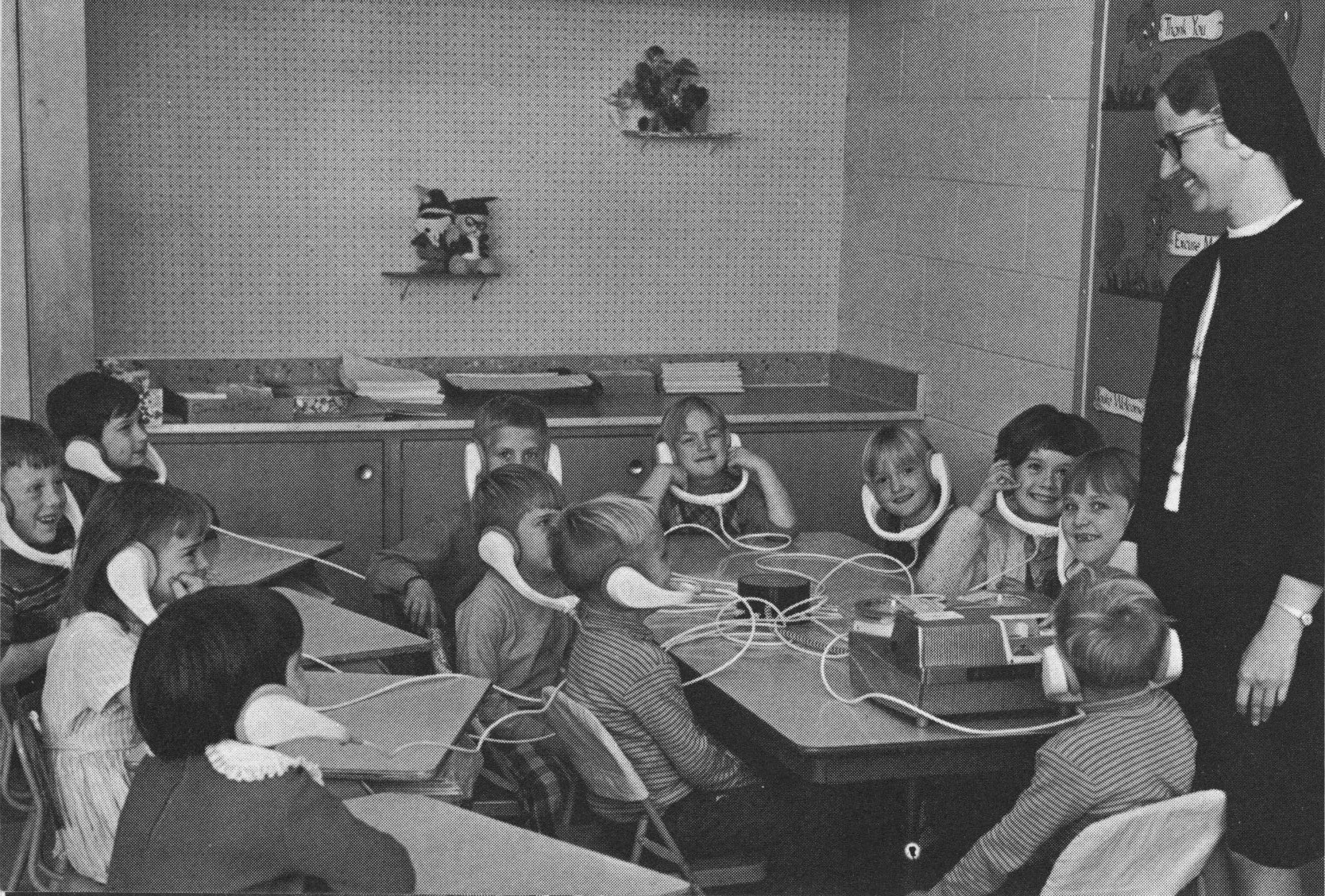 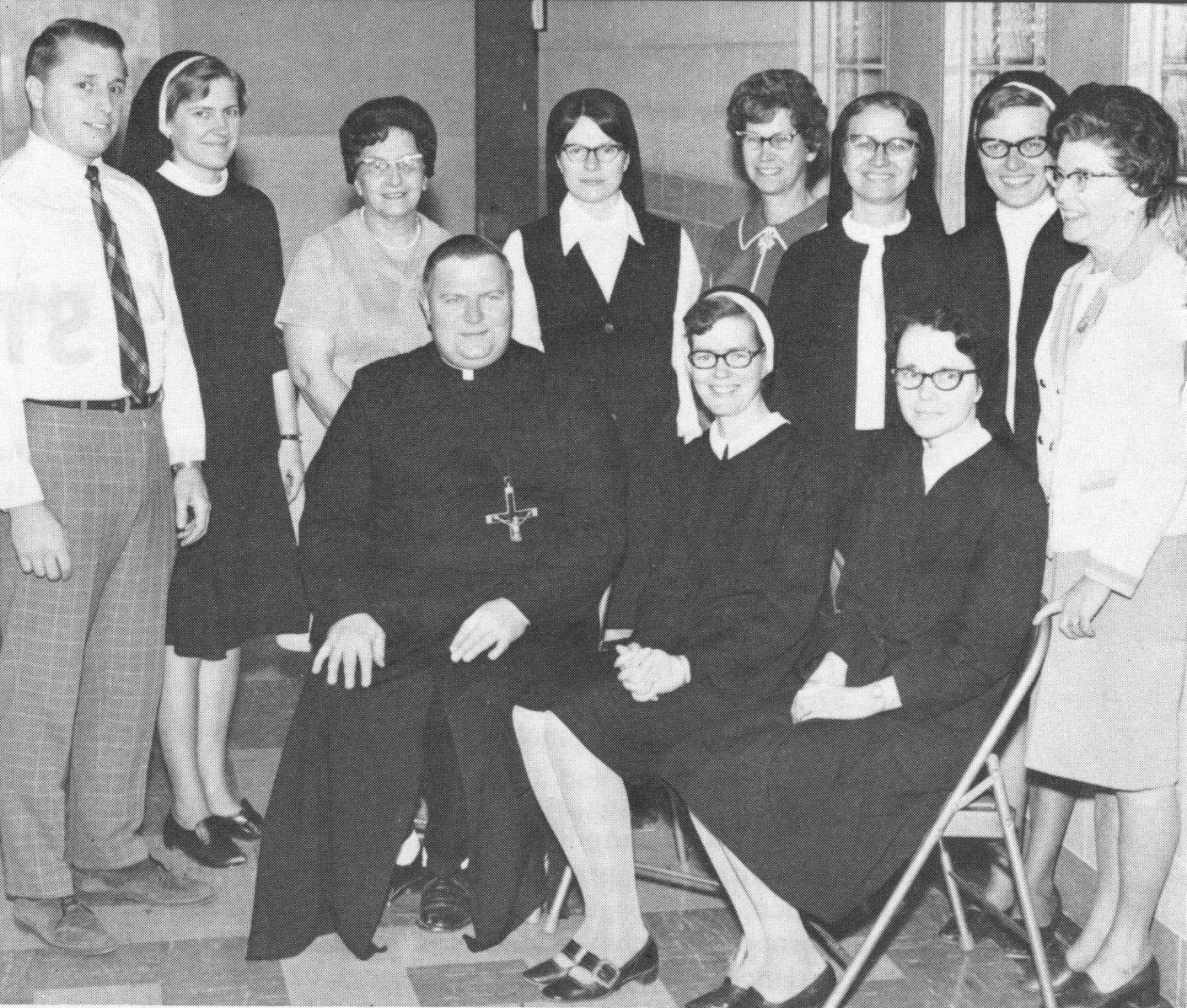 Twin steeples of St. Louis Church were finally completed in 1891. The rectory on the left burned down in 1938. 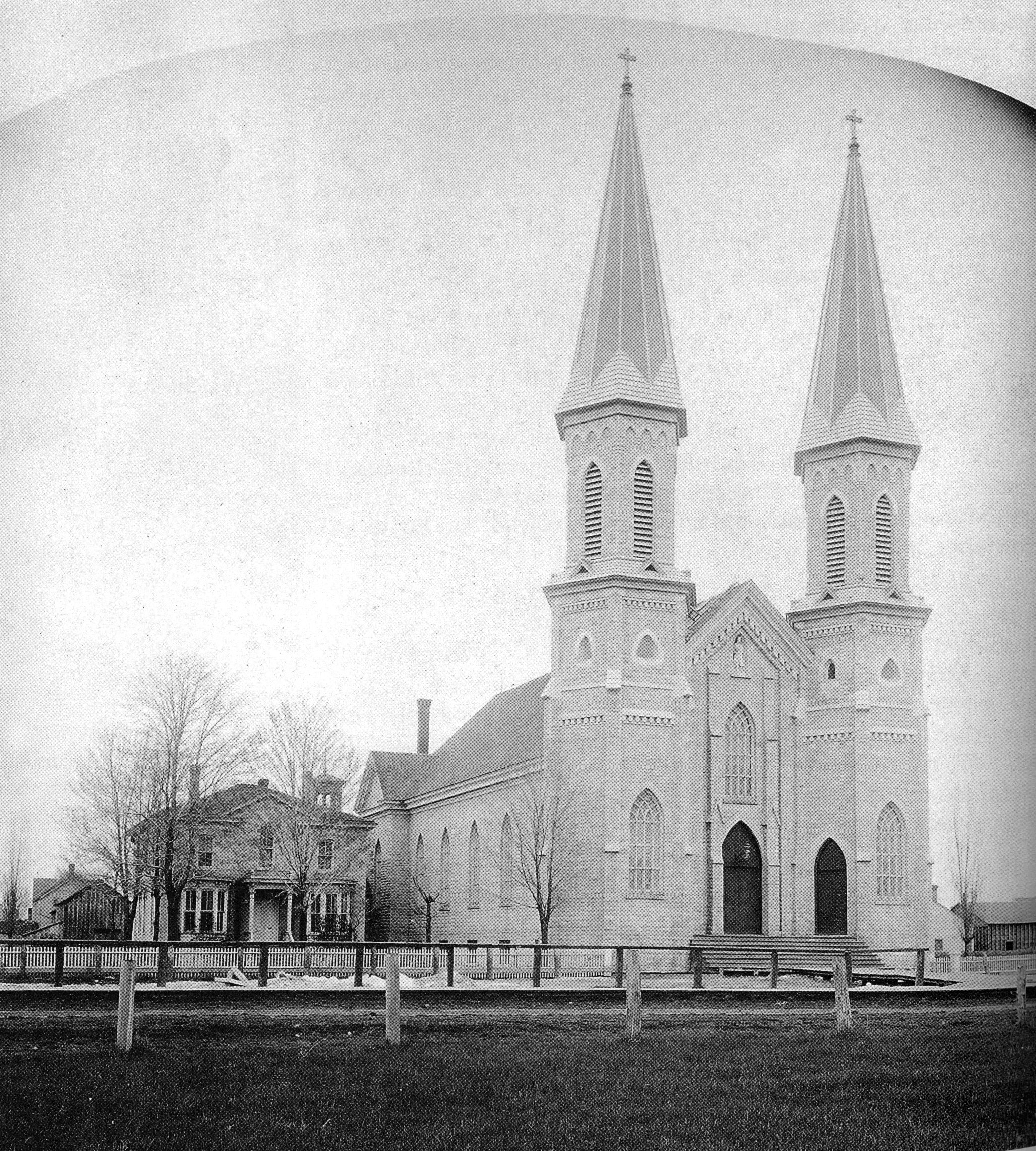 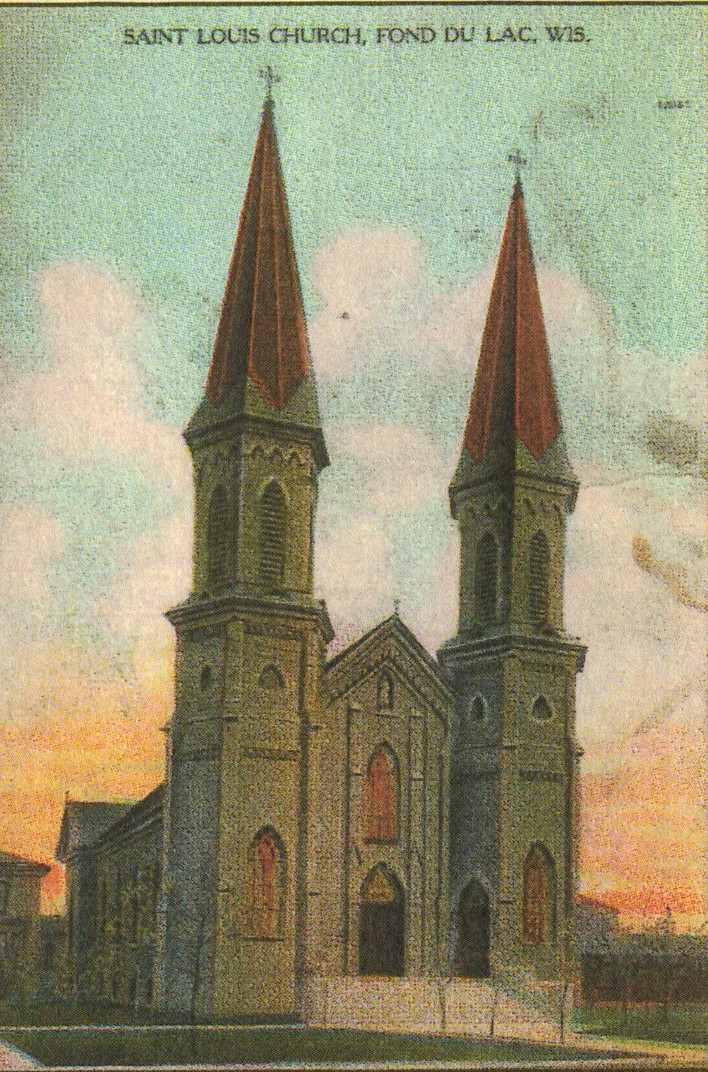 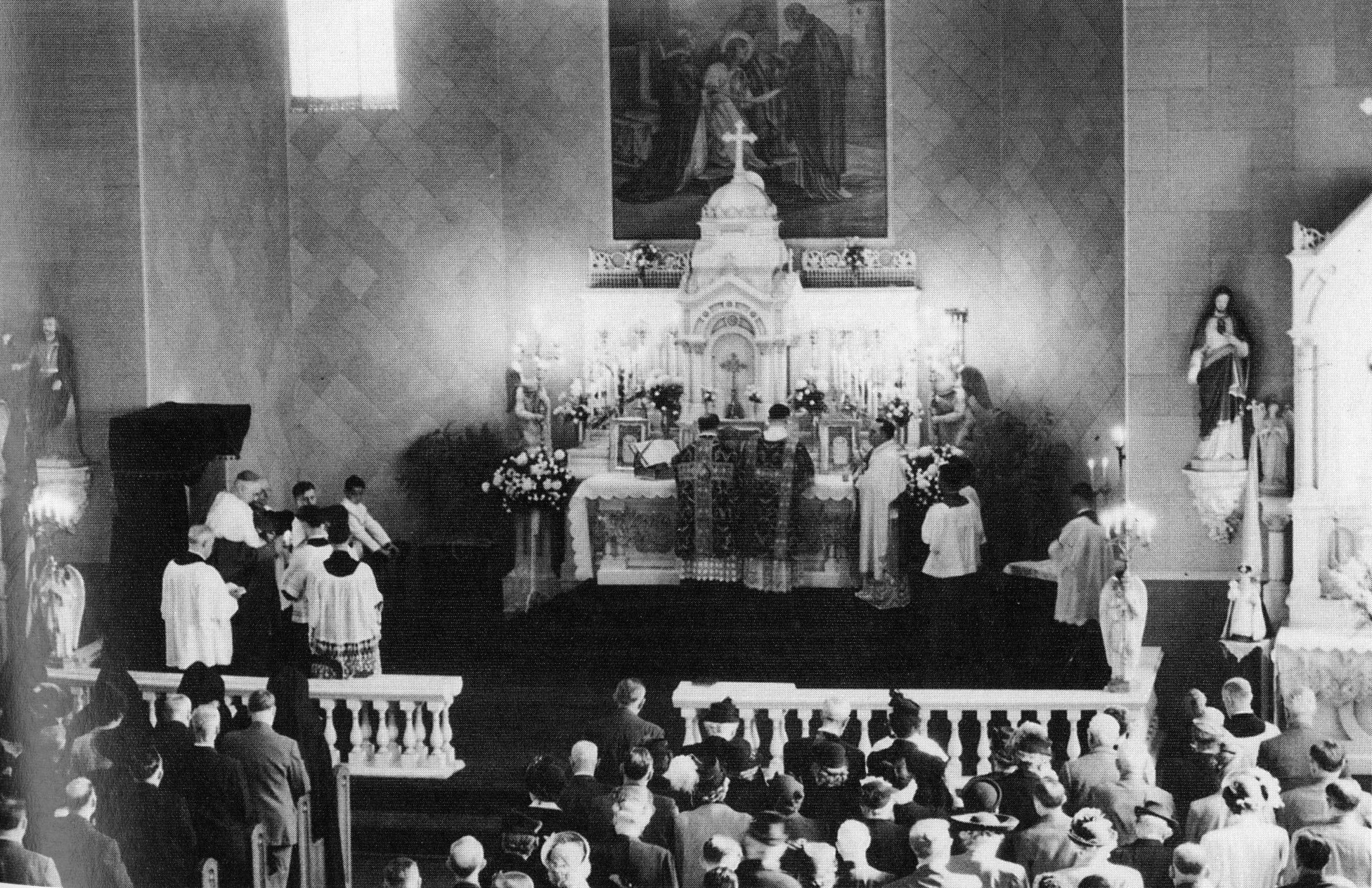 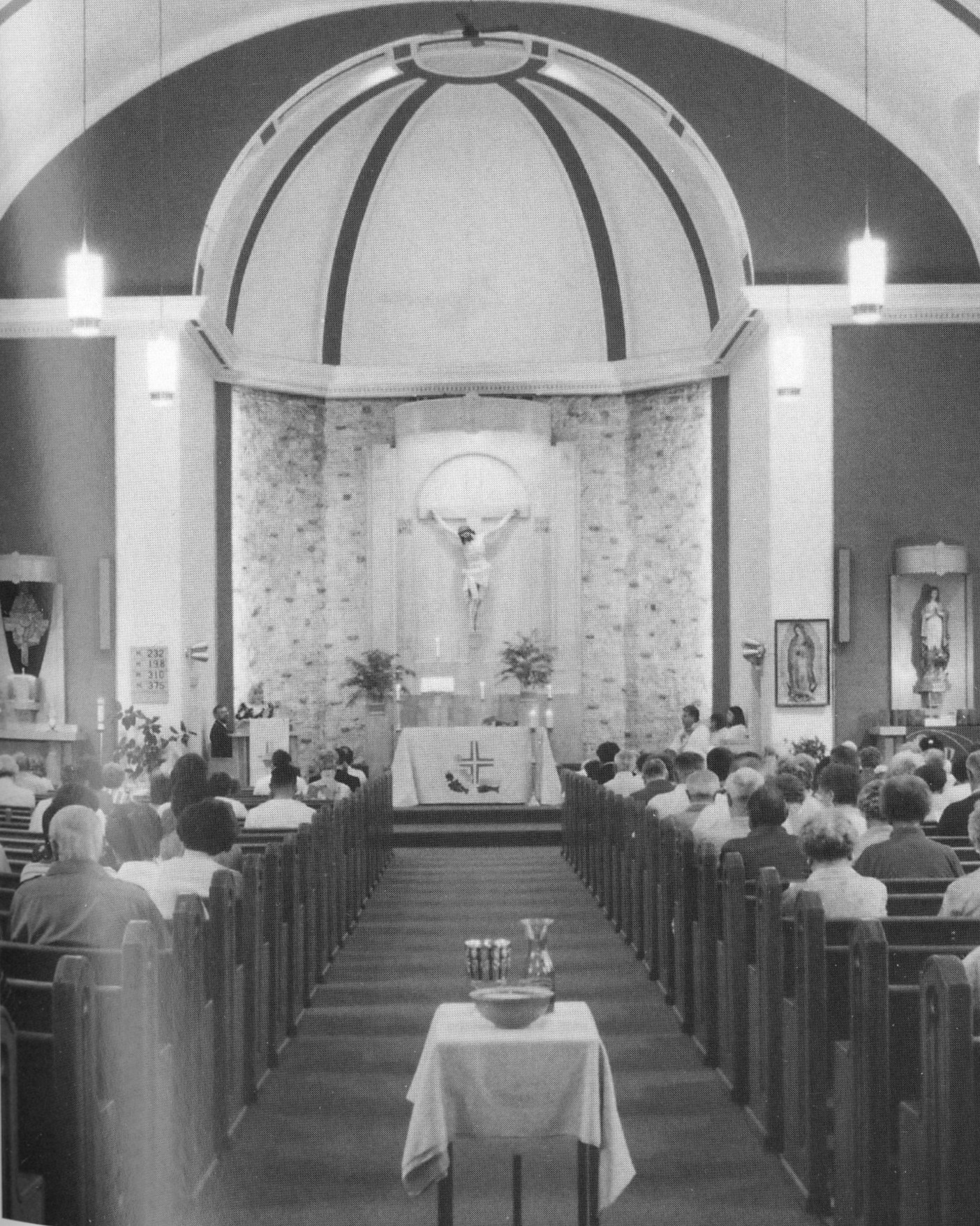 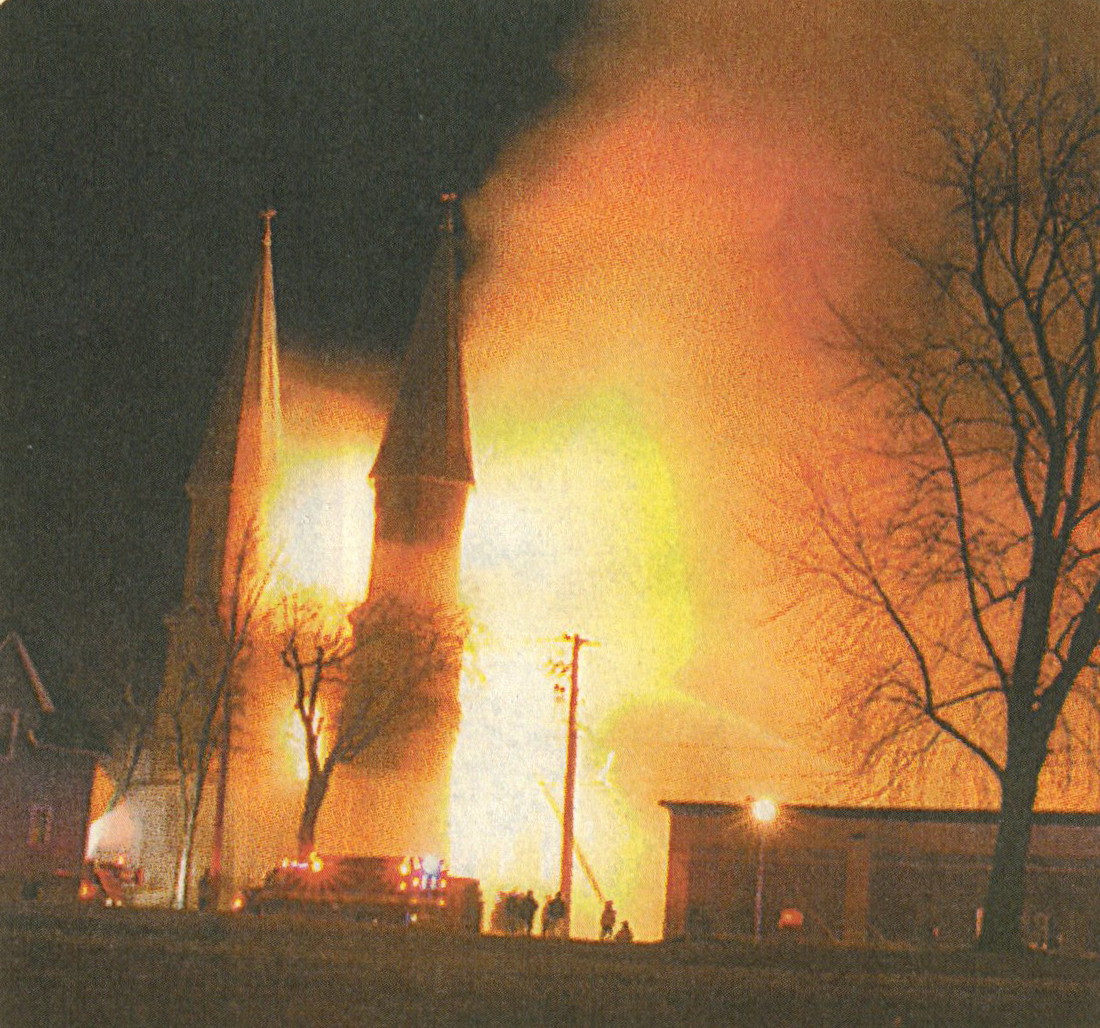 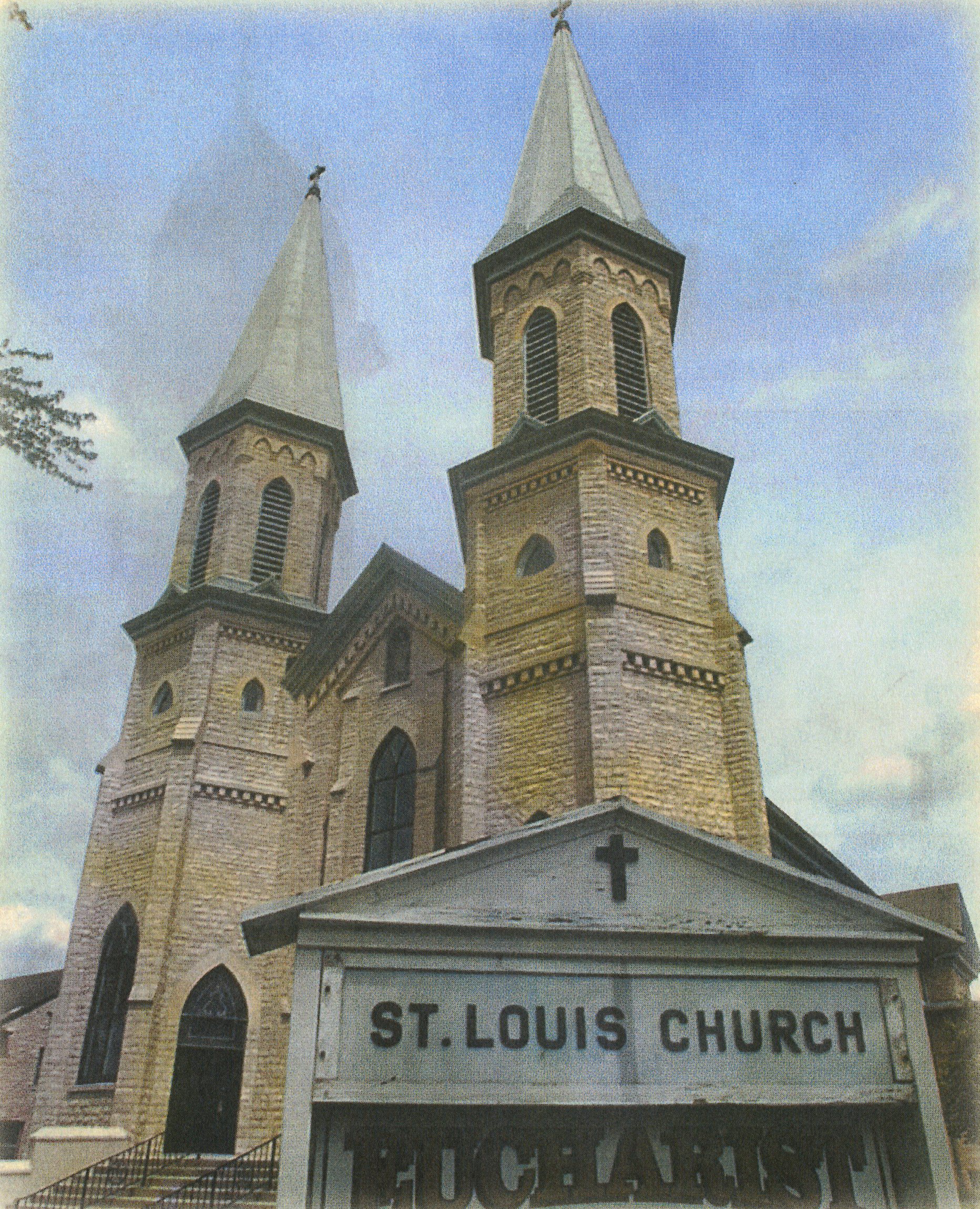 Remains of St. Louis Church after the fire, March 2007. 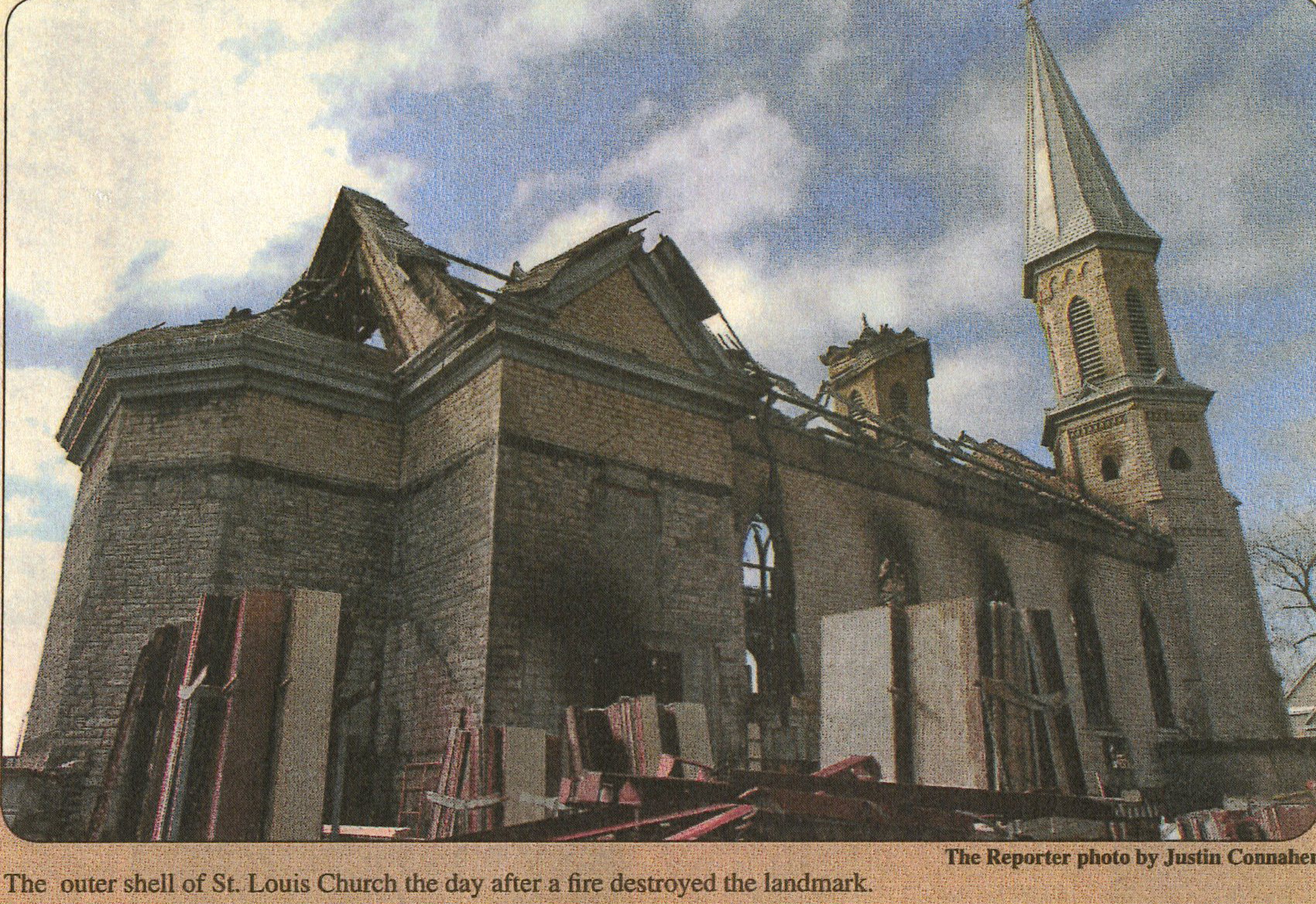 St. Louis Parish was organized out of an existing parish, also called St. Louis, in 1862. The original St. Louis, established in 1847, was the first parish in Fond du Lac. It served a large multi-cultural community largely made up of Germans, Irish, and French. Beginning in 1855, each ethnic group eventually would break away from the mother parish to form their own congregation and the original St. Louis Parish would be renamed St. Joseph Parish.

The French congregants, under the leadership of Father John Perrodin, began planning for the new St. Louis Church in 1868. Plans for the church, located at Follett and Bannister (now Macy) Streets called for a 120 foot by 50 foot stone structure with two 140 foot towers, although some accounts list the footprint of the building to be 150 by 65 feet. The cornerstone was laid in 1869 and Masses were held in the basement of the church until the structure was finished in 1871, although the towers would not be completed for another twenty years. Besides the name, St. Louis Church also claimed the bell and a large white cross from the original St. Louis Chapel.

The first St. Louis School, operated by the Sisters of St. Agnes, was started in 1879 but only lasted a year due to financial difficulties in the parish. In 1880, Father Charles Boucher became pastor, installed a pipe organ and helped the congregation grow to over 105 families. After a brief stay in Rome in 1887, he returned to St. Louis and his enthusiasm and fundraising acumen spurred the parish to remodel the church in 1888 and finish the twin steeples in 1891. He started a school in 1895, run by French nuns who only stayed a year. Then he asked the Sisters of St. Agnes to take over the school, which they did until 1904, when the school closed.

In 1917, the Archdiocese announced that the priests of the Oblates of Mary Immaculate would now be assigned to St. Louis Parish. The first of these priests, Father Joseph H. Racette, made the decision to give all sermons in English beginning in the early 1920s.

The church rectory and some parish records were destroyed by fire on December 28, 1938, but a new rectory was completed in 1939. As the congregation grew, Father Joseph T. Morissette, spearheaded the effort to build an elementary school that would serve 365 students in the parish. St. Louis School was completed for the cost of $250,000 and dedicated by Archbishop Albert Meyer on October 30, 1958. The Sisters of St. Agnes again served as teachers and administrators in the school. In 1968, land bordered by Johnson, Macy, and Follett Streets was purchased for use as a playground and parking lot.

In 1986, the Oblates considered their mission at St. Louis fulfilled and withdrew from the parish. Archdiocesan priests then took over its administration. In 2000, Holy Family parish was established to encompass all the Fond du Lac area parishes. The school building was converted into office space for the new parish and the final Mass was celebrated on August 25, 2005.

Church property was sold in 2005 and 2006. The church’s altar, baptismal font, lectern, and chancel chairs were purchased by Fond du Lac Lutheran Home and the crucifix, placed in the church around 1950, was purchased by a St. Louis alumnus, Scott Chapin, and given to his new parish, St. John Vianney in Rio Rancho, New Mexico. The church itself was purchased by the owner of Attitude Sports in 2006, but a fire destroyed the building on March 19, 2007, leaving only one of the iconic twin spires standing. Shortly after, the remains of the church were razed and retail space built in its place.