Gordon Hirabayashi Recreation Site is named in honor of a Japanese American who was wrongly imprisoned at the labor camp once located here for challenging the internment of Japanese Americans in World War II. His conviction was later appealed and the site named in his honor. The history of the labor camp began in 1933 as prisoners camped here as they constructed a highway in the Catalina Mountains. The road was finished in 1939, but the area was deemed suitable for a minimum-security prison labor camp known as Catalina Federal Honor Camp. In World War II, draft resisters, conscientious objectors, and a few Japanese Americans were sent here, including 24-year-old Gordon Hirabayashi. Being a staunch constitutionalist, Hirabayashi decided not to comply with President Roosevelt’s Executive order 9066. The Supreme Court upheld his conviction, but in 1987, the 9th Circuit Court of Appeals would revisit the case and rule in his favor. Hirabayashi would later receive the Presidential Medal of Freedom from President Obama. The Honor Camp housed juvenile delinquents until 1967 when converted to a rehabilitation center for the youth. The center was closed in 1973 and this area is now utilized for outdoor recreation.

The top of Mount Lemmon, the Mountain that the road was being built to. 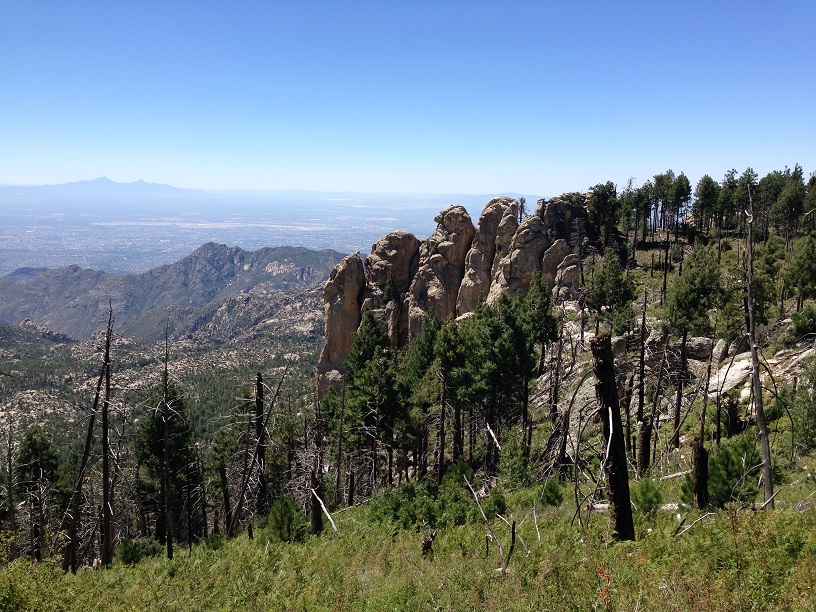 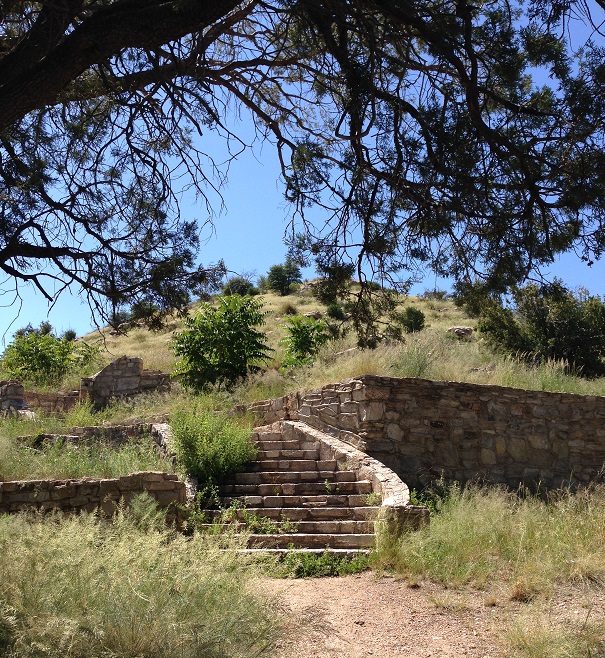 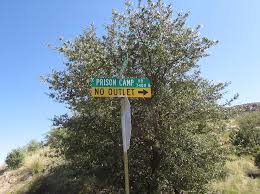 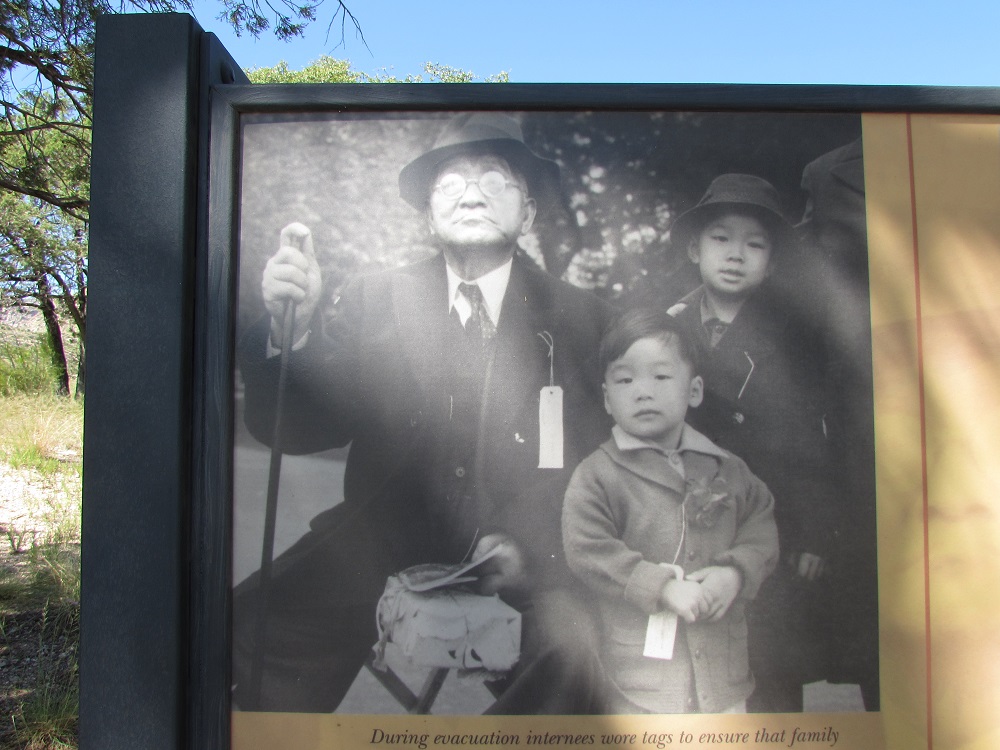 Blueprints for Catalina Federal Honor Camp. This is what the camp would of looked like while it was in use. 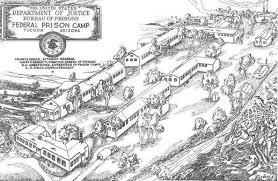 Prior to 1933, the only option to get to Mount Lemmon in the Catalina mountains was on a rigorous road from Oracle. The need for a shorter route that was cost-effective resulted in the Bureau of Public Roads, Arizona Highway Commission, and Bureau of Prisons striking a deal that would use prison labor to build the new highway from Tucson to Soldier Camp. Construction began in 1933, with prisoners sleeping in tents along the road. Their offenses would range from tax evasion, immigration violations, and bank robbers before the Second Great War.

After seven miles of road was constructed in 1939, the Federal Honor Camp (Honor Camp) was built in the effort to replace the temporary campsites along the road. The official site would not have any bars, guard towers, nor fences, but would have a perimeter that was formed with painted rocks. By 1940, the Honor Camp had a set of barracks, mess hall, laundry hall, powerhouse, storage room, garage, vocational shop, and a classroom for the prisoners. On the administrative side, there were several cottages for personnel and an administrative building. In addition to all of these, the camp had a water supply, sewage system, poultry and agriculture farm, and a baseball field.

When the second war broke out, prisoners began to consist of those that were draft resisters, conscientious objectors, and a few Japanese Americans. Notably, the first Japanese American to arrive at the camp in 1943 was 24-year-old Gordon Hirabayashi. He was charged with violating the exclusion order as well as a curfew. With the ongoing war, prisoners would be given the change once a month to go on early parole if they decided to enlist within the military, and a lot of people took this opportunity.

The highway was officially finished in 1951, eighteen years after construction began and was recorded to be twenty-four miles long. The Federal Honor Camp transformed into an honor camp for juvenile delinquents to deter away from future crime. The juveniles would run logging and sawmills operations and a sign shop until 1967. The Honor Camp was again transformed into a rehabilitation center for the youth. It was officially shut down in 1973.

Quickly after its closures, the buildings were destroyed with only fragments of foundations and various rock walls left behind as a reminder of its history. The camp was turned into a campground with trails for the public and officially renamed “Gordon Hirabayashi Recreation Site” in 1999. Today, the public can visit the site and learn about its history on various kiosks placed around the park.

After the December 7, Pearl Harbor attack, government officials feared that there were Japanese loyalists within the country’s borders. As a result of this fear, various government agencies began to target those of Japanese descent. The Department of Treasury froze all assets while the Department of Justice arrested community leaders in fear of being them being dangerous. This continued with President Roosevelt’s Executive order 9066 on February 19, 1942. This presidential order in which gave authority to the Secretary of the War would result in the removal of thousands of Japanese Americans living on the west coast into internment camps. Being a constitutionalist, Gordon Hirabayashi decided that this order was unconstitutional and would not comply with it.

Being raised as a firm believer in his religious beliefs as well as the United States Constitution, Hirabayashi became an American disobedience advocate. Upon hearing of the orders on May 4, 1942, Hirabayashi failed to comply for twelve days until he turned himself into the FBI on May 16. His main goal was being a test case for the unconstitutional rights that were targeted towards Japanese Americans.

After his arrest, the FBI was able to seize a diary that contained numerous entries of reasons he decided not to comply with the curfew. On May 28, 1942, Gordon Hirabayashi was indicted on violating the curfew as well as the civilian exclusion order, which were federal offenses. Claiming that he was not guilty, his trial date would not be until October 20 of that year in front of Judge Lloyd Black. With an all-male jury, he received his verdict of guilty on all accounts within ten minutes.

With being sentenced to two consecutive thirty-day sentence, Hirabayashi requested Judge Black to send him on to a road camp. For him to qualify for the road camp, Gordon Hirabayashi had to extend his sentence, which he agreed to. Ultimately, he was sentenced ninety days at Dupont Road Camp. The case then was appealed to the 9th Circuit Court of Appeals in San Francisco, who then sent it up to the Supreme Court and was heard on May 10, 1943.

Gordon Hirabayashi’s case was one of four cases that regarded the acts of exclusion and incarceration of Japanese Americans that the Supreme Court heard. With his sentences being consecutive, the Supreme Court only considered the curfew issue, and their ruling appeared on June 21. They upheld his conviction. Chief Justice Harlan Fiske Stone stated, "some infringement on individual liberty was allowable in time of war and the government could adopt measures for public safety based upon recognition of facts and circumstances which indicate that a group of one national extraction may menace that softy than others. (Niiya, 2014)"

Upon having to report to the Dupont Road Camp, Gordon Hirabayashi was informed that the camp was inside of the exclusion center and so he would have to serve his time inside a jail. Having to extend his sentence so he can work at a road camp, he requested to be sent to another location, which is how he ended up at the Catalina Federal Honor Camp. Although to get to the camp, he had to hitchhike.

The District Attorney told him that the government would be unable to transport him to the Catalina Federal Honor Camp. As a result, he spent the next several weeks hitchhiking from Washington to Arizona, which on the way he was able to see his parents in Idaho. Upon arriving, Hirabayashi had to not only to convince the officials that he had lawful orders to be there, but they sent him to watch a movie until they found his paperwork.

Gordon Hirabayashi notes that his experience at the Catalina Federal Honor Camp was "truly inspiring." After his release, he had to serve another one year at McNeil penitentiary for Select Service violations before continuing his education. In 1987, the 9th Circuit Court of Appeals ruled in favor of Hirabayashi, stating writ of Coram Nobis. His convictions were overturned. President Obama would reward the Presidential Medal of Freedom in 2012.