Loíza is a city in Puerto Rico that honors the culture of the country, focusing on its African heritage. Around the city, you can see an environment of joy and festivity, the people of Loíza love to feel the rhythm of music and know how to express it through dance, keeping the tradition of festivals alive. Besides music and dance, there are others aspects of the city where you can clearly see the African heritage: the people from Loíza dress in honor of the African heritage of Puerto Rico. In the city, you can find the past of Puerto Rico and the best of it in many aspects. Loíza is the city in Puerto Rico with the biggest investment in farming and fishing, two areas that were traditionally the biggest industries in the economy of Puerto Rico. Loíza is known for its great and varied food that offers all the best dishes of Puerto Rico, but more than that, here, you can find the joy of the Puerto Rican culture.

National costumes of the island that are used for the festivals. The masks of the costumes are made of the hard part of coconuts. 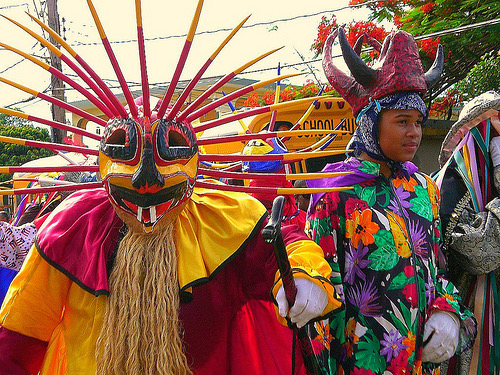 The national dance of Puerto Rico, "Bomba y Plena," is based on the interaction of the dancer and the drummers. A connection of sounds and movement is required for the dance. 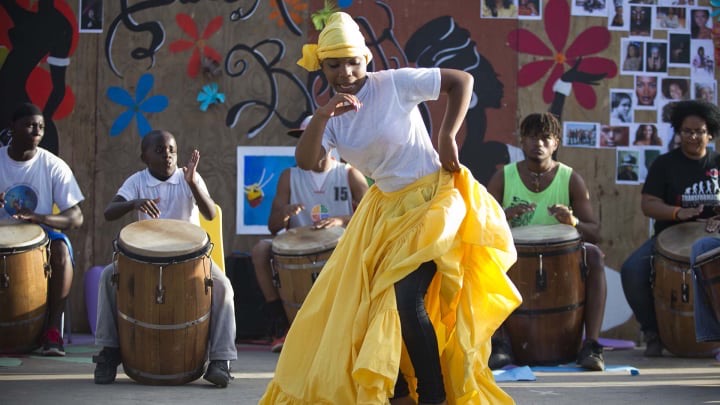 National fried foods being cooked outside and displayed for sale. In the picture, long 'alcapurrias' and rounded 'bacalaitos', two of the most famous fried foods of Puerto Rico, are on display. 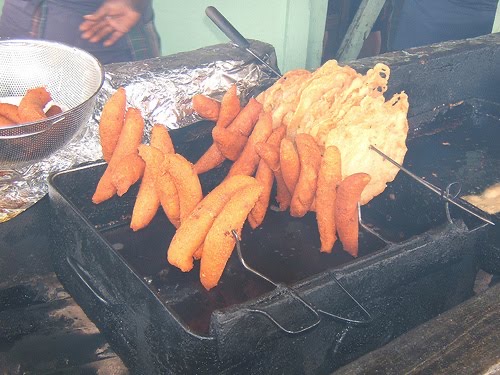 Cultural buildings represent how the African ancestors of the island used to live. 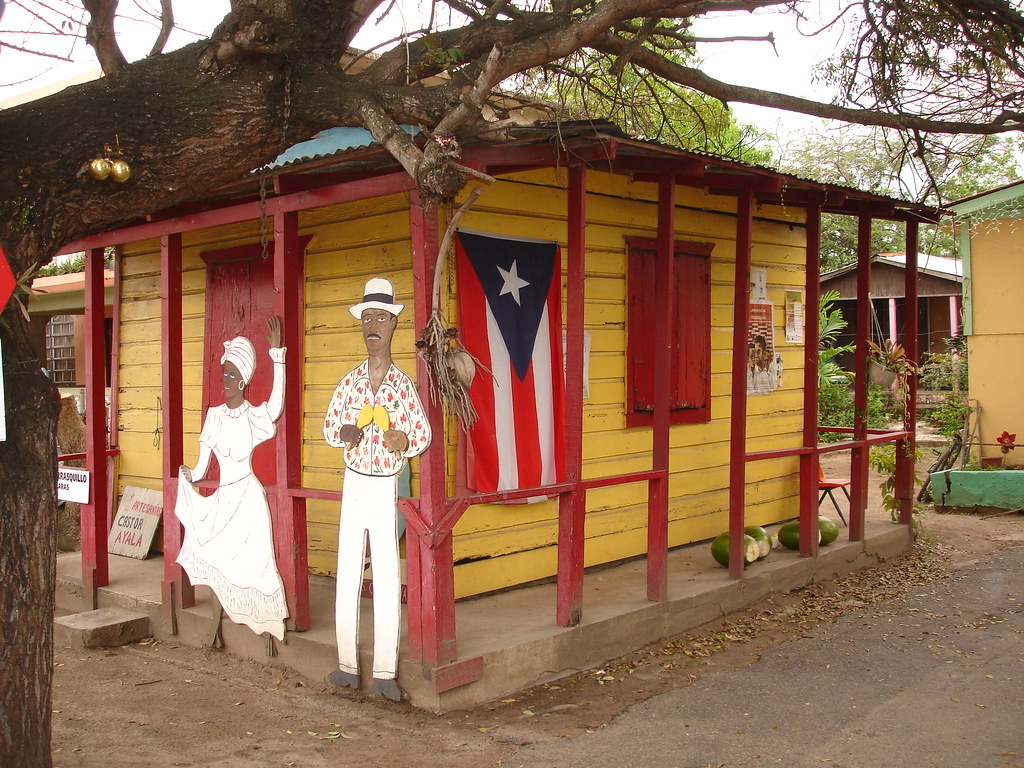 Cultural clothing for the national dance: "Bomba y Plena." The long skirt is necessary for the movements that this dance represents, and the turban on the head is very representative of African ancestors. 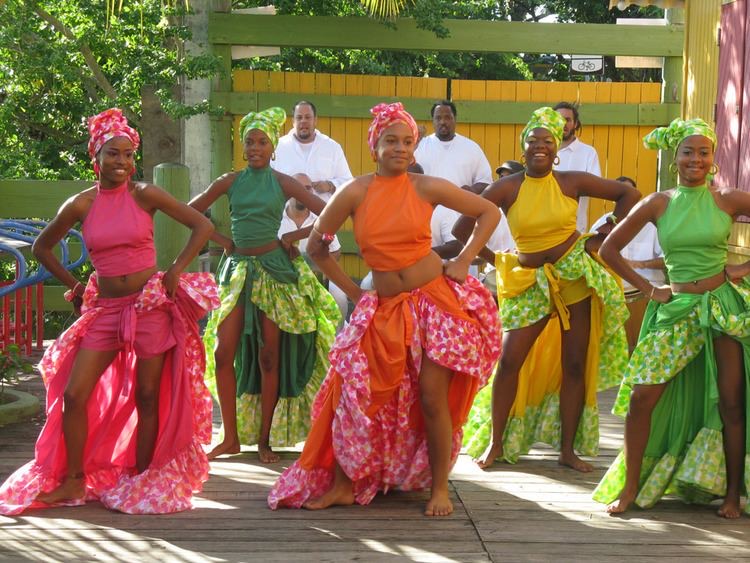 National fried foods being shown for sale in Piñones, a place where most varieties of the national foods are sold and tasted. 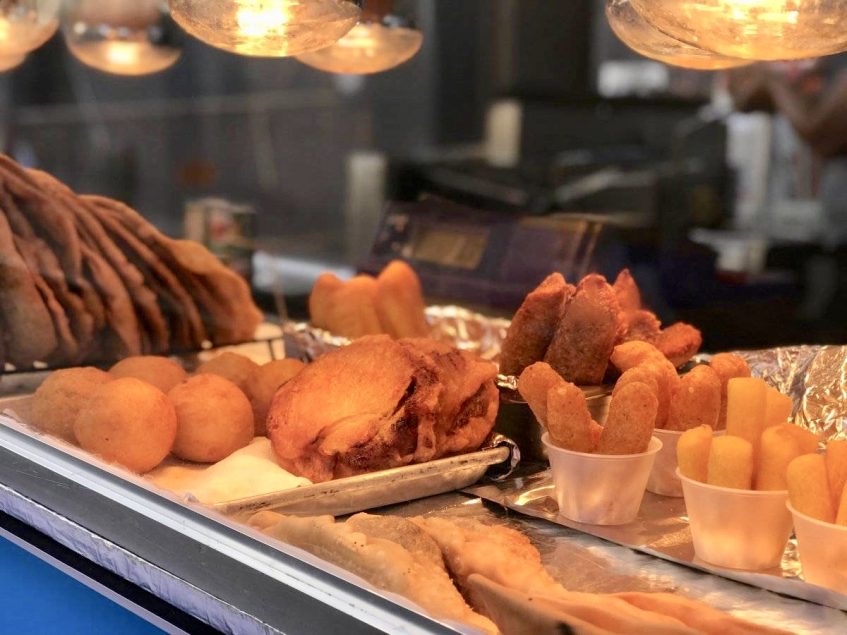 There are many aspects of African heritage in the town of Loíza that still live in the souls of the people from Loíza, such as: agriculture, music, dance and food. Loíza is called the capital of tradition since it is one of the few places where African heritage is so clearly manifested through culture. African heritage has a major influence on Puerto Rican culture, and this town celebrates how the African ancestors of the island used to live. In Loíza, you can see how people work hard to maintain agriculture, and how they insist on using their own produce for cooking the traditional foods of the island. Moreover, in this town you can see how the energetic personality of the Puerto Rican people is reflected through dances and music with the rhythm of ‘Bomba y Plena’, traditional music of the island.

The traditional music of Puerto Rico is ‘Bomba y Plena’, which tells the story of the miscegenation of the island's population, highlighting the island's African heritage. In the town of Loíza, there are multiple folk groups that make the music of ‘Bomba y Plena’ stand out, such as: ‘Hermanos Ayala’ and ‘Los Mayombes’. The music of ‘Bomba y Plena’ is considered a social movement because it takes into consideration the African heritage and the presence of black people that have cultural knowledge of the island. ‘Bomba y Plena’ music is also considered to educate the people about their own culture and minimize racism. This music genre can be heard in every corner of the island when visiting, it distinguishes itself with the pattern of sounds from drums and maracas; this is the type of music that connects the culture of Puerto Rico with its African heritage.

The biggest factors that move the economy of the island are agriculture and tourism. In the town of Loíza, people work hard to sow and reap sugar cane, coconut and other fruits which are very attractive for all tourists who visit the town. Additionally, in Loíza the poeple grow plantains because these are used in the making of many traditional dishes of Puerto Rico, such as: mofongo and tostones. There is a famous place in Loíza called Piñones, which is near the beach and offers a variety of the best dishes of Puerto Rico; this place is visited by many tourists from around the world every year. In Loíza, in addition to agriculture, inhabitants also practice fishing very frequently because fish makes up parts of traditional dishes that are prepared daily and attract the tourists that visit, therefore, it also helps the local economy.

The past of Puerto Rico still lives in the hearts of the people from Loíza, they strive to keep the traditions of African heritage alive that distinguish the culture of the island. More than just a town, Loíza is a social movement that teaches younger generations about their culture. At the same time, it presents the culture to every tourist that comes to visit the island. Loíza is saving the traditions of the island while working hard to mobilize and contribute to the island’s economy through agriculture and high demand for tourism. These are some of the many reasons to highlight the town of Loíza in Puerto Rico, a town that has so much to offer to the whole world. Full of culture and hardworking people, this town is a very important destination to visit because it is a town that can show how some of the most important historical and cultural aspects of Puerto Rico that derive from African culture still live in the population of today.