The Black Soldier Memorial Statue, commissioned and dedicated by the City of Baltimore thanks to the financial support of an anonymous donor, was designed by sculptor James E. Lewis and unveiled on May 30th, 1972. The statue depicts a soldier holding a wreath and sash. Written on the sash is a chronology of the wars in which African American soldiers fought in the service of the United States. The statue was originally located on the north side of the Battle Monument Park, but has been a permanent fixture in War Memorial Plaza, in front of Baltimore City Hall, since 2007.

A Close-Up of the commemorative plaque 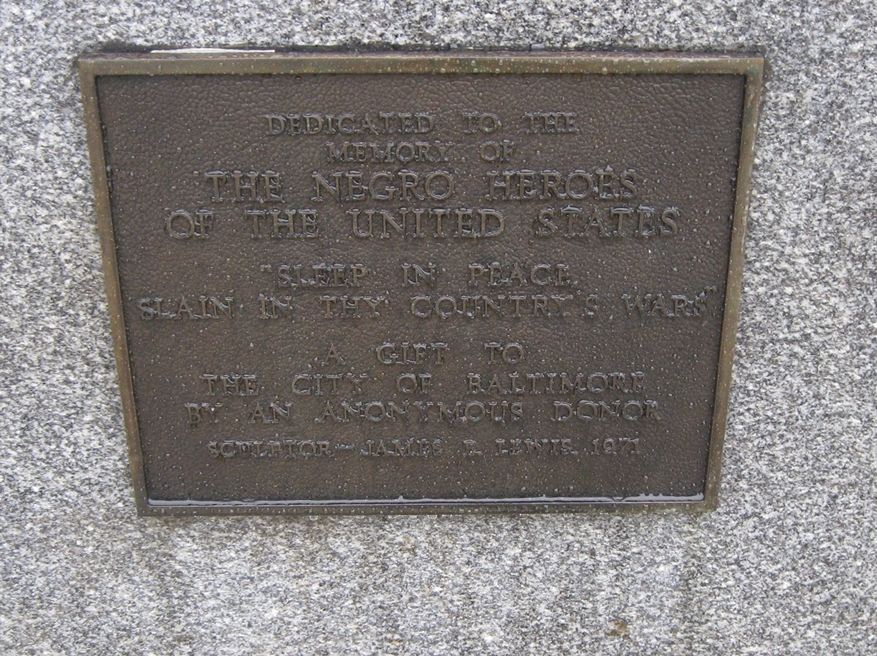 From the Revolution War to the Vietnam War, the monument honors Black soldiers who fought and died protecting their country. It commemorates the sacrifices they made and the patriotism that drove them into service, even amidst the immense prejudice and racism they faced. The official name of the monument at the time of its dedication was the Negro War Heroes Monument, though it has gone by several names, including "Black Soldier Memorial Statue" and "Monument to the Black Soldier," since its unveiling in 1972.

The 13-foot-tall bronze statue was sculpted by James E. Lewis, who was chairman of the art department at Morgan State University for 36 years. Lewis made use of the highly-regarded bronze foundry, Roman Bronze Works, in the creation of the piece which towers on a rectangular base of granite. Facing the elegant War Memorial Building and its aquatic horse statues, the monument's current location represents a success, in itself.

Originally situated at the north end of Battle Monument Park, the statue was was the subject of both intense debate and poor placement. While many felt it was not the best site because the park was a celebration of a single event--the defense against and defeat of the British assault on Baltimore in 1812--others felt the placement awkward and disrespectful to the soldiers it sought to honor. In its former location, the Black Soldier Memorial Statue was situated with its back to the busy thoroughfare of Calvert Street, making it unrecognizable to drivers. After thirty years tucked away at the north end of the park, the statue finally found a new home. At the urging of The African American Patriots Consortium, and with the support of several veterans’ organizations, the statue was transported to its current location at the entrance to Baltimore City Hall, facing War Memorial Plaza, in January, 2007. In an ironic twist, the monument's current location rests upon the former site of the Holliday Street Theatre, where actor John Wilkes Booth, the assassin of President Abraham Lincoln, performed.1

The Black Soldier Memorial Statue now stands in a more prominent location-- a location from which then President-Elect Barack Obama gave a speech on January 18, 2009, remarking on Baltimore’s historic role in the formation of the United States. Not much is known of the generous donor(s), though the Smithsonian Institution Research Information System has noted that the cost of the sculpture was $30,000. This gift to the City of Baltimore will forever stand as a tribute to all those who gave their lives in service of this great nation.