Built at the corner of 21st and Guadalupe streets at the University of Texas at Austin in 1972, the Harry Ransom Center stands as an internationally renown center for humanities research and art museum. The Center is named after Harry Huntt Ransom, an English professor who eventually became president of the University of Texas. Ransom served as director for the center's archives and collections for three years, and defined the center's mission to become "a center of cultural compass." Today, the Harry Ransom Center houses a number of interesting materials, including one of 20 copies of the Gutenberg bible in the world; original works of Frida Kahlo; the earliest known photograph made with the camera obscura; and production materials from Gone With the Wind, among many other artifacts and pieces of art. The Center is free and open to the public.

The exterior of the Harry Ransom Center. 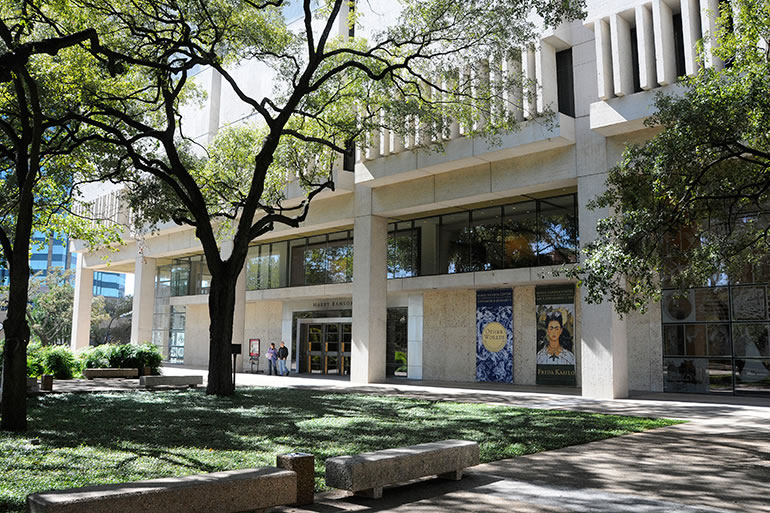 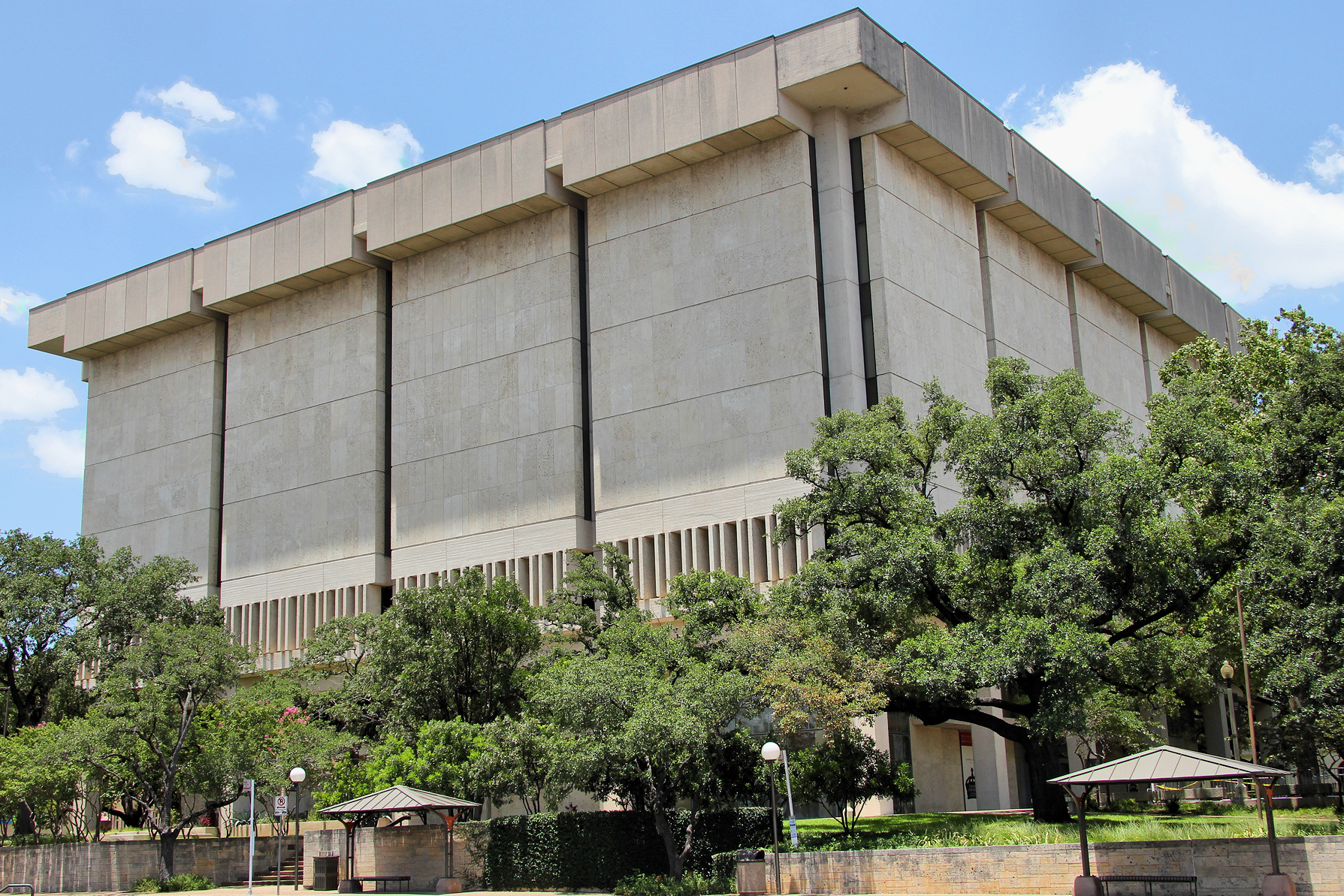 "I propose that there be established somewhere in Texas--let's say in the capital city--a center of cultural compass, a research center to be the Bibliothèque Nationale of the only state that started out as an independent nation."

The collection of artifacts which would eventually become the Harry Ransom Center, an internationally renowned humanities research center, began in the early twentieth century. In 1917, the University of Texas English professor Reginald H. Griffith persuaded University regent George W. Littlefield to purchase the library of Chicago businessman John Henry Wrenn for the University. The Wrenn library contained manuscripts of the Brontë sisters, Alfred Lord Tennyson, and the Brownings, as well as nearly 6,000 first and rare edition works of seventeenth- and eighteenth-century English and American authors. This initial purchase of Wrenn's library sparked a flurry of interest in humanities research, as the University purchased the library of George A. Aitken four years later, which contained critical works of Sir Richard Steele, Andrew Marvell, Alexander Pope, and Johnathan Swift. Four years after that, Miriam Lutcher Stark of Orange, Texas donated her sizable personal library, which included four of the first folio editions of Shakespeare, and manuscripts and first editions of works by Lord Byron, Shelley, and Keats. After acquiring the sizable Wrenn library, the University of Texas first placed the materials in the Spanish-Mediterranean revival style Old Library Building designed by Cass Gilbert in 1911. The sizable collections of Wrenn, Aitken, and Stark, provided the foundation for the huge collection of humanities materials the Harry Ransom Center houses today. By 1952, the University's collection had reached one million volumes.

While the University of Texas's collection of humanities research and art was already sizable prior to Harry Ransom's introduction, Ransom defined the mission for what would eventually become the Harry Ransom Center. Harry Huntt Ransom was an English professor at the University of Texas, who would eventually serve in various positions of the University, including dean, vice president and provost, and president. Amidst these other duties, Harry Ransom also served as the director for the materials and library holdings of the University of Texas from 1958-1961. In 1956, before he began his tenure as director, Harry Ransom declared his ambitions for the University's library collections in a speech to the Philosophical Society of Texas. He proposed "that there be established somewhere in Texas--let's say in the capital city--a center of cultural compass, a research center of the Bibliothèque Nationale of the only state that started out as an independent nation."

Throughout his short tenure as director and for many years after, Ransom worked relentlessly to create his vision of a unique center of cultural compass. While serving as the center's director, Ransom first decided to take an entirely new approach to collecting literature. Since the University of Texas's library could not reasonably build a strong collection of early printed books due to the late introduction to the collection scene, Ransom decided instead to collect modern English and American literature, including works of living writers. At the time, few institutions had set foot in this territory, which meant that collection materials were abundant and prices were relatively low. Also unlike many other curators, Ransom sought to acquire entire working archives rather than individual manuscripts. He believed that literary study requires a full, cohesive picture of writers and their work, including writers' journals, outlines, notes, drafts, and correspondence. As director of the Center, Ransom acquired the extensive libraries of Edward Alexander Parsons and T. Edward Hanley. Collectively, these libraries contributed manuscripts of James Joyce, D.H. Lawrence, and George Bernard Shaw, among others, and also provided resources for European history and literature.

In order to accommodate its massive collection of manuscripts, rare books, art, and other artifacts, the University came to the conclusion that a new building had to be constructed to house materials. The first building built solely to house these materials, the Humanities Research Center, was built at the corner of 21st and Guadalupe streets in Austin, Texas in 1972. Prior to this location, the resources of the H.R.C. had been housed in the Old Library Building, Main Building, and Academic Center at the University of Texas. The architects of Jessen Associates created the seven-story, nearly square Center with limestone exterior walls and nearly 175,000 square feet of space under the supervision of Ransom. In 1982, the Center was renamed the Harry Ransom Humanities Center in honor of its founder. Ransom only served as director of the Center for three years, but remained involved with the center until his death in 1976. After Ransom’s death, a number of directors after him, including F. Warren Roberts (1961-76), John Payne and Carlton Lake (1976-80), Decherd Turner (1980-88), Thomas F. Staley (1988-2013), and the current director Stephen Enniss, have also contributed greatly to the resources of the Harry Ransom Center.

Today, the Harry Ransom Center’s staff carries forward Ransom’s vision of a center of cultural and humanities research. The Center owns over 42 million manuscripts, nearly one million rare books, 5 million photographs, 100,000 works of art, major holdings in the performing arts and film, and one of the strongest collections of twentieth- and twenty-first-century British and American literature in the world. Highlights of the museum include original works of Frida Kahlo; Robert De Niro’s archive of scripts, notes, costumes, and props; the earliest known photograph made with the aid of the camera obscura; E.E. Cummings’s wooden painted box; production materials from Gone With the Wind; some of Albert Einstein’s unpublished notes and calculations for his work on general relativity; Gabriel Garcia Marquez’s manuscripts, correspondence, and notebooks; and one of only 20 copies of the Gutenberg Bible in the world, among many other resources. Over 10,000 visitors come to the Harry Ransom Center each year.