Completed in 1835, the Thomas Viaduct is the oldest, multi-arched stone railroad bridge in North America. Built by the Baltimore and Ohio Railroad to assist in connecting Baltimore with Washington D.C., the viaduct was the longest railroad bridge in the country at the time and has been in continual use since its construction. Its 612-foot span features eight-arches of roughly 58 feet in width built along a four-degree curve over the Patapsco River and Valley that was designed by Benjamin Henry Latrobe II. It is now owned and maintained by CSX Transportation and still supports its 300-ton diesel engines. It has been a National Historic Landmark since 1964 and was designated a National Historic Civil Engineering Landmark by the American Society of Civil Engineers in 2010.

The Thomas Viaduct and the line it serviced ushered in the railroad age when it was completed in 1835. 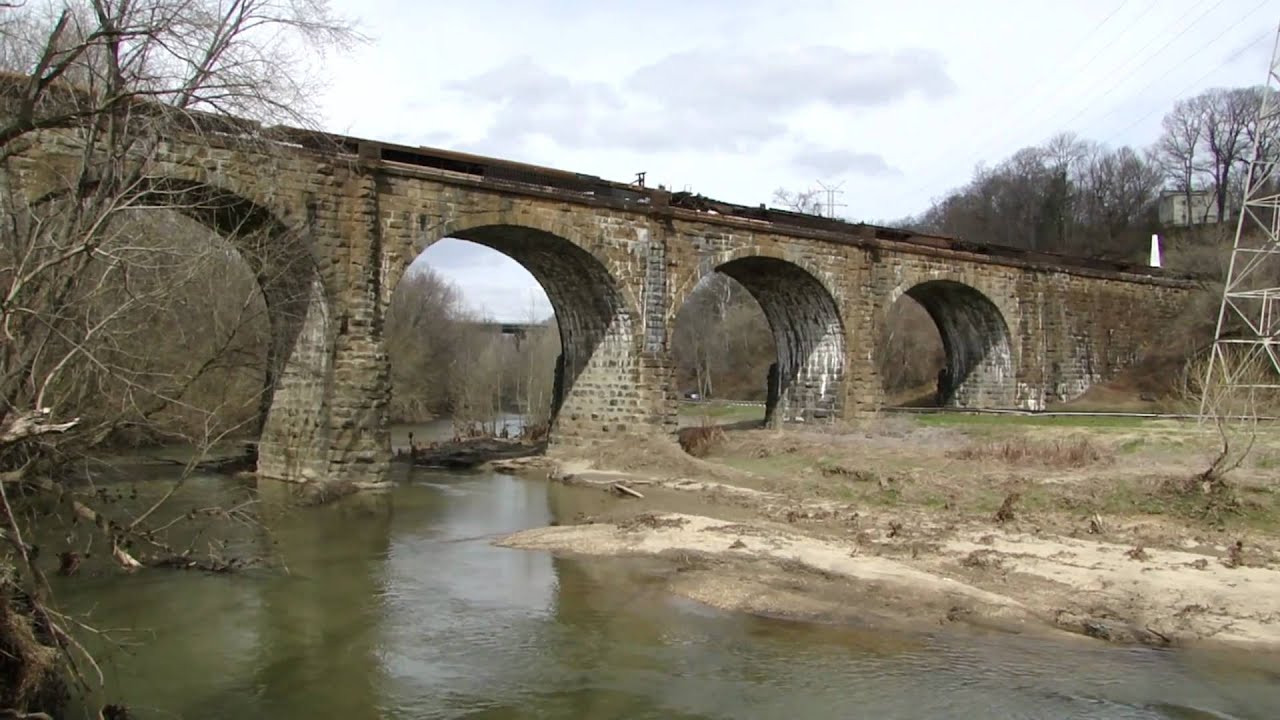 This aerial image reveals the four-degree curve on which the viaduct was built over the Patapsco River Valley. 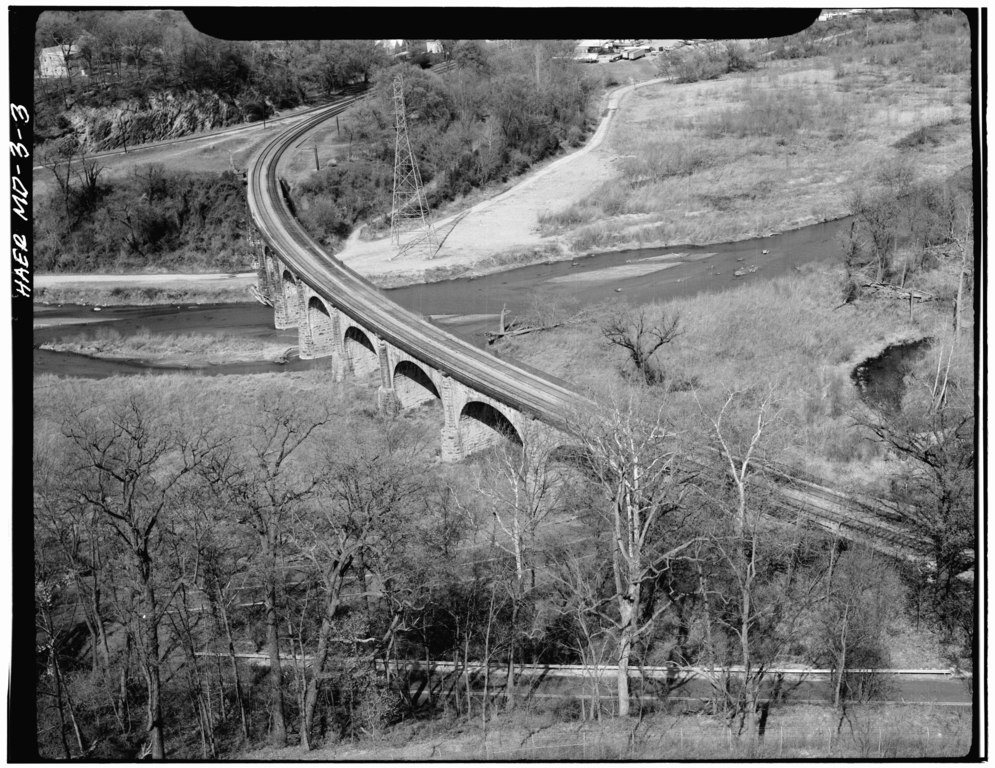 The Royal Blue passenger train crossing the viaduct in 1937. 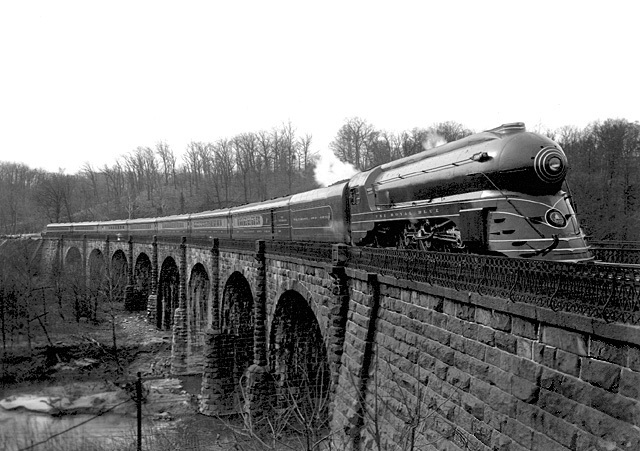 This photo shows how the viaduct has deteriorated over the years. 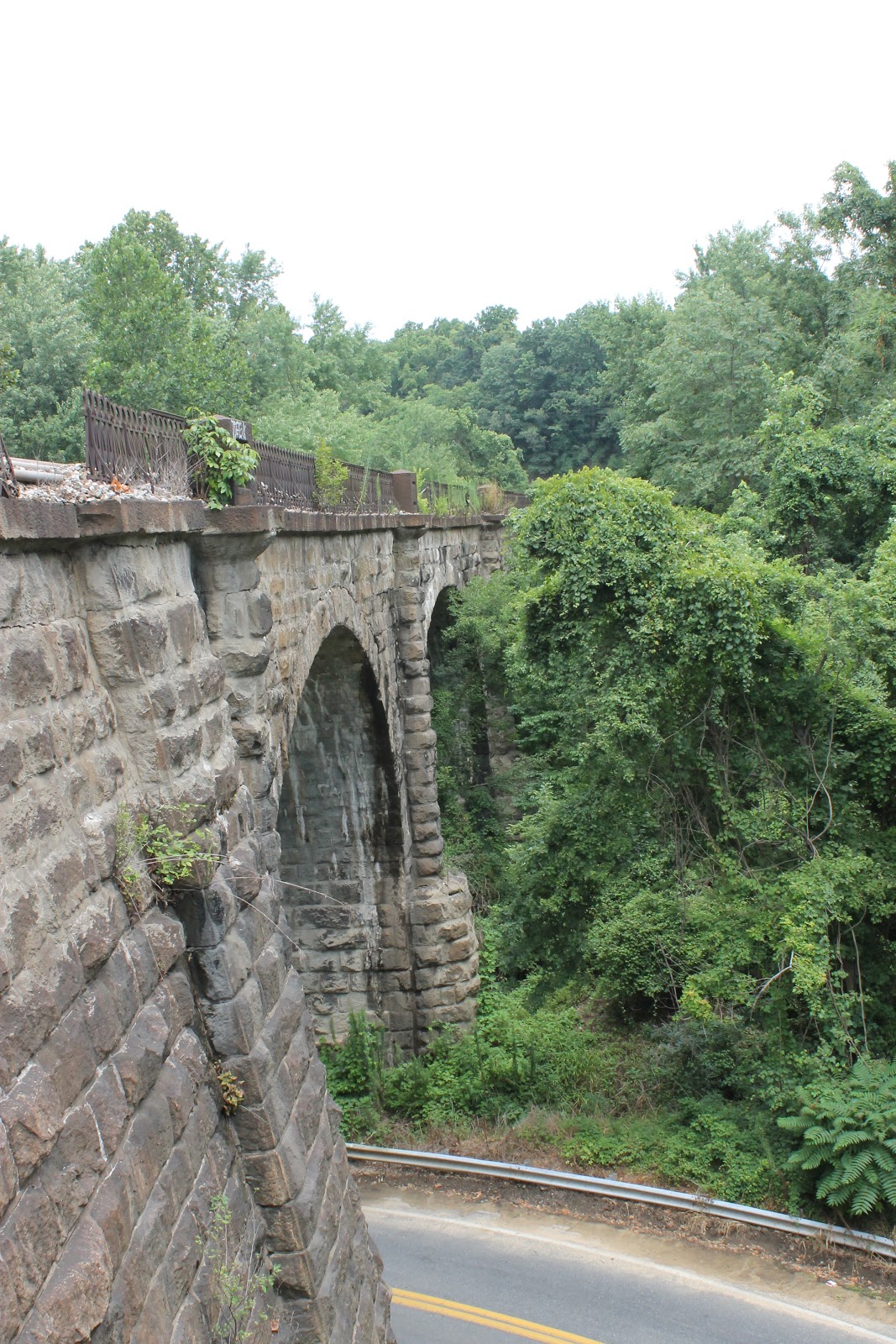 The viaduct's Builder's Monument has been encased to protect it from vandals and the elements. 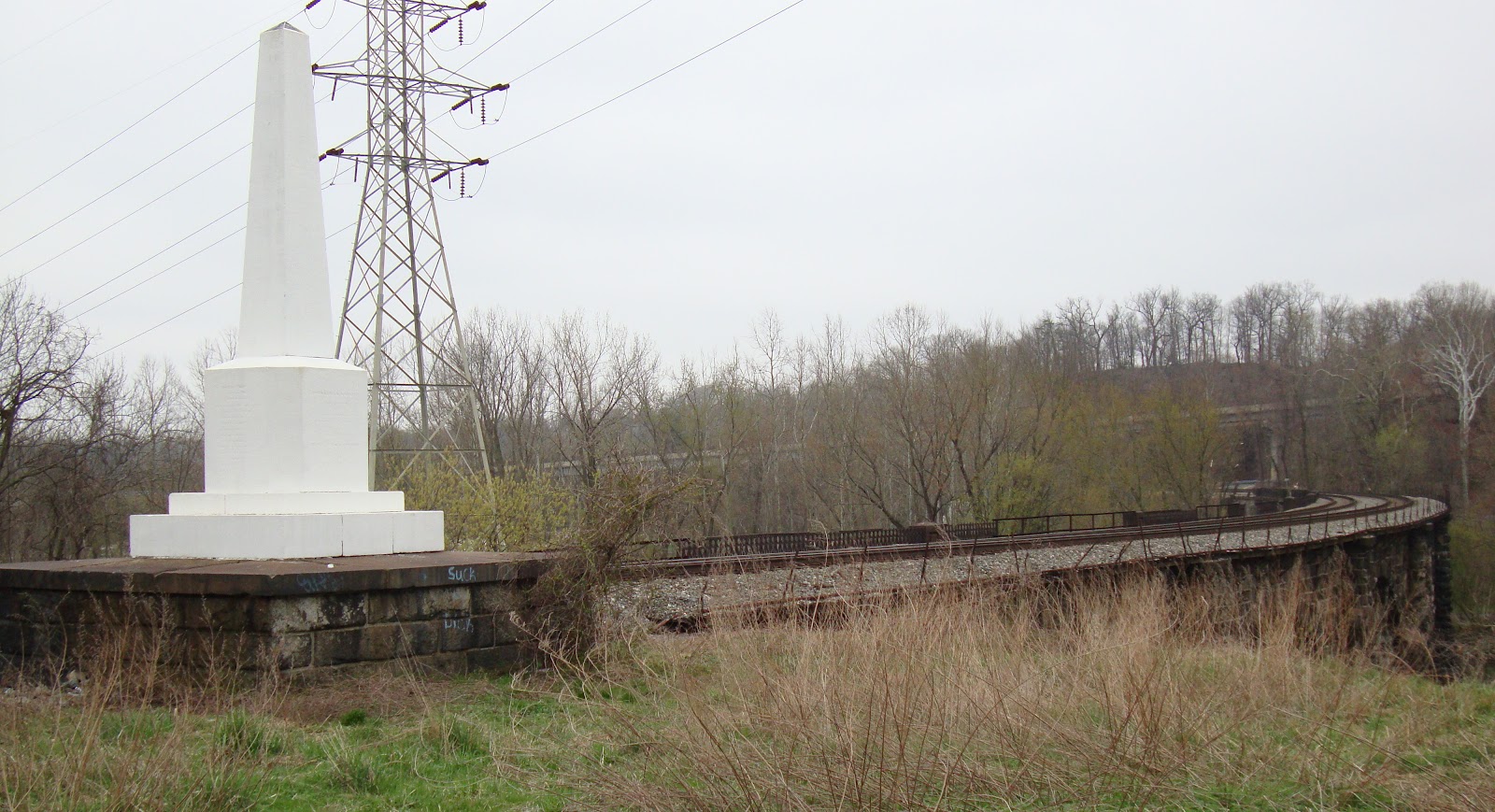 The viaduct is still able to support the massive CSX locomotives. 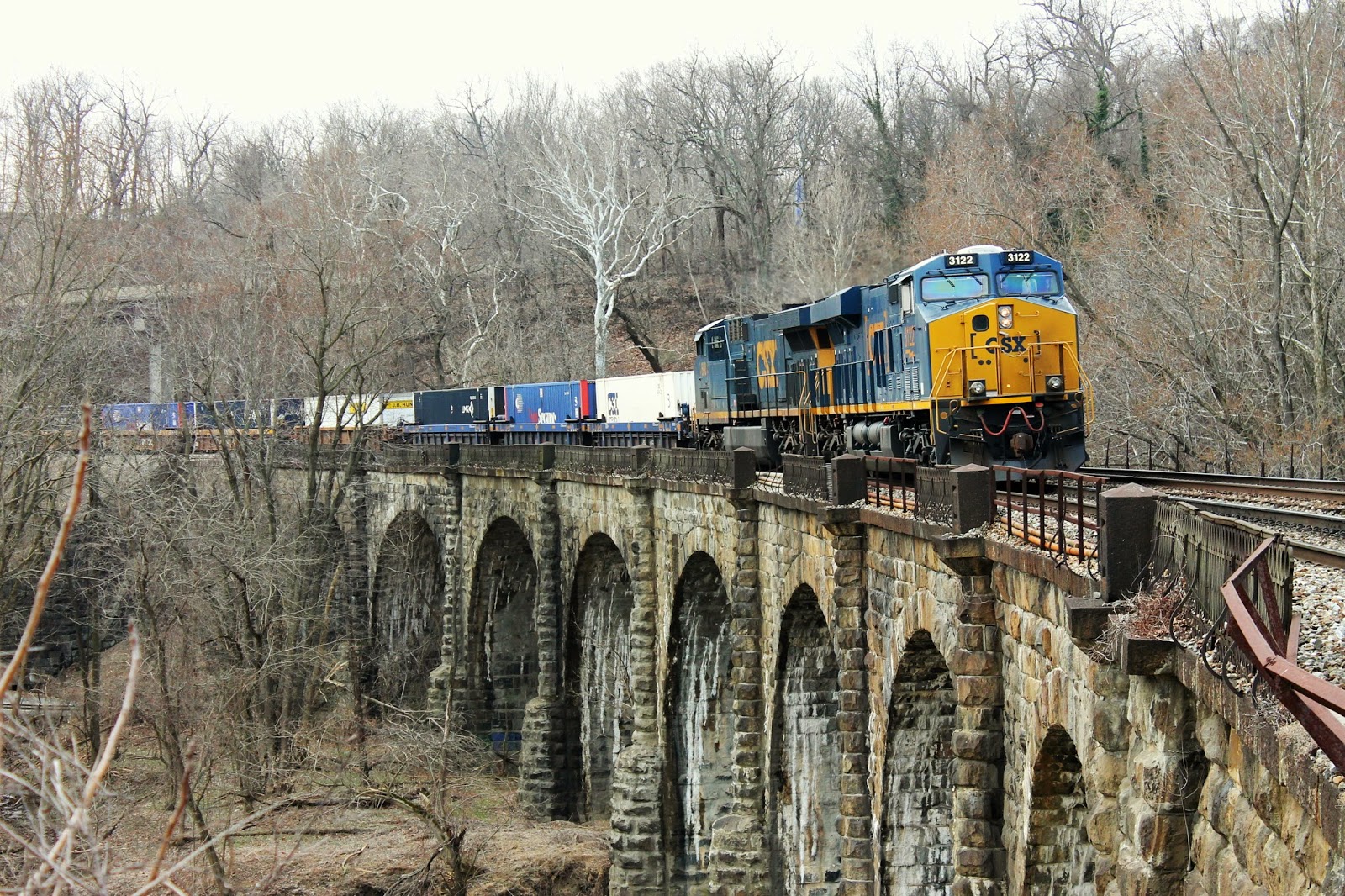 Construction on the Baltimore and Ohio Railroad (B&O) began in 1828 and originated in what is now Baltimore’s Inner Harbor. The first section to Ellicott’s Mills (now Ellicott City) opened in 1830, making it one of the earliest rail lines in the country with cars pulled by horses rather than steam locomotives. The B&O continued to extend its lines to Frederick (1831) and Point of Rocks (1832). Logically, the B&O sought to connect Baltimore and Washington D.C. and gained a charter from the state to do so in 1831. To complete this line, a bridge would be required to carry trains over the Patapsco River at Relay, Maryland.

The B&O tasked one of its assistant engineers, Benjamin Henry Latrobe II, to design the viaduct across the river valley and Latrobe proposed a multi-arched span built along a four-degree curve. Latrobe’s design featured trapezoidal-shaped piers separated by eight, 58-foot Roman arches on a 1,273-foot radius. He made the width of the piers on the outside of the curve greater than the width along the inside of the curve, a novel innovation for the time. Latrobe decided to build his 612-foot viaduct with local granite ashlar, known as Woodstock granite and its track would rest 60 feet above the water’s surface. John McCartney, who built the smaller Patterson Viaduct in 1829, was contracted to construct the viaduct and Casper Wever served as Superintendent when a small army of Irish and German immigrants, as well as free African Americans, began construction in 1833.

The viaduct was completed two years later and branched off the main line where the Relay House Hotel and, later, the Gothic Viaduct Hotel once stood. The Viaduct Hotel served as both train station and house of lodging until 1938 and it was eventually torn down in 1950. Referred to as “Latrobe’s Folly” many believed the viaduct would collapse under its own weight prior to the first train travelling its length. It did not, and a 15-foot obelisk was built at its east end to memorialize all those involved in its construction. During the Civil War, the viaduct was heavily guarded by Union troops as it was a vital supply link for Washington D.C.

Over the years, the Thomas Viaduct has carried thousands of trains, to include the B&O’s famous Royal Blue Line passenger trains between D.C and New York City as well as the Capital Limited to Chicago and the National Limited to St. Louis. It has required little maintenance even as the locomotives it carried increased from 3-ton steam locomotives to 300-ton diesel ones. It has only undergone extensive renovations in 1937-38 and withstood Hurricane Agnes in 1972.

With the arrival of Amtrak in 1971, B&O ended passenger service, except for local D.C. to Baltimore lines and in 1986, CSX acquired B&O. The viaduct still carries CSX freight and MARC commuter trains. The viaduct now bisects Patapsco Valley State Park and while still structurally sound, its has become largely forgotten and the victim of superficial disrepair. Trees and bushes grow from its various cracks and crevices and its obelisk has been defaced by vandals. In 2014 and 2015 it was listed on Preservation Howard County’s list of top ten endangered historic places and labeled “threatened” by the National Trust for Historic Preservation in 2016. There are efforts currently underway to restore the viaduct and to create an interpretive park at its base so that visitors can learn more about it.

Patapsco Valley State Park open daily from 9:00AM to dusk.