Pringle Tree Park was established in 1978 as a memorial to brothers John and Samuel Pringle, who are considered to be the first European settlers in Buckahnnon County. The two were deserters from the French and Indian War who supposedly lived here in a large sycamore tree for three years in the 1760s. The accuracy of the story remains uncertain, but it remains popular in West Virginia historiography. The Pringle Tree Park borders the Buckhannon River and is maintained by the Upshur County Commission. It contains picnic facilities, an athletic field, a boat launch ramp, and a playground. An alleged third-generation sycamore tree stands around where the original Pringle Tree once stood.

Today a historical marker commeorates the story of the Pringle Tree. Image courtesy of Turner Sharp. 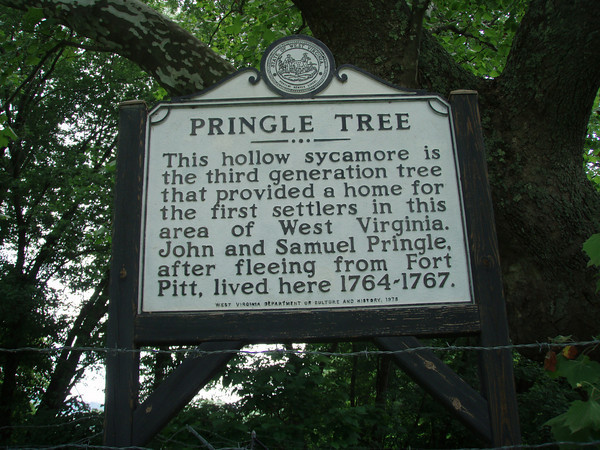 This third generation sycamore tree stands on the supposed site of the original Pringle Tree. It contains a much smaller hollow cavity than the original. Image courtesy of Turner Sharp. 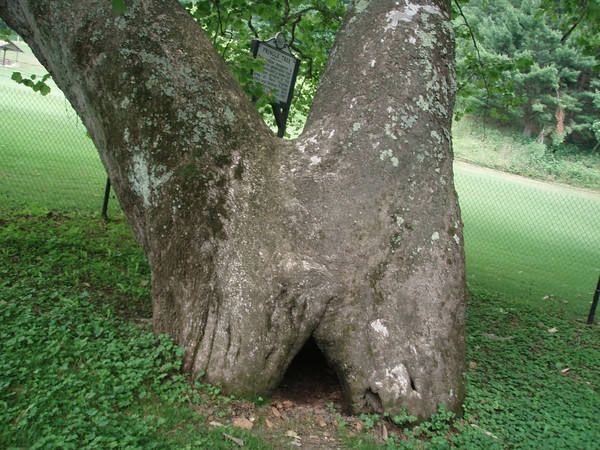 Samuel and John Pringle were two brothers who lived on the South Branch of the Potomac River, in an area that now makes up the Eastern Panhandle of West Virginia. During the French and Indian War (1754-1763) the brothers enlisted in the colonial militia and were stationed with the British garrison at Fort Pitt, in present-day Pittsburgh. The Pringles grew discontent with their position, and in 1761 they deserted their post along with Joe Linsey and William Childers. Linsey and Childers were captured a year later, but the Pringles managed to continue living as refugees. For a time they worked for a hunter and fur trader named John Simpson, but later left after having an argument.

Around 1764 the Pringle brothers made their way into what is now Buckhannon County; they were likely the first Europeans to set foot in the area. According to legend, they spent three years living inside of a giant sycamore tree. Located near the confluence of the Turkey Run stream and Buckhannon River, the tree apparently had a hollow cavity so large that it made an ideal shelter for the two. According to one source, the inside was over eight feet wide. It was fairly common for hunters, fur traders, and travelers to stay in natural shelters such as caves and hollow trees, but few are known to have remained as long as the Pringles. Because of their extended stay, the brothers were considered to be the first settlers in Buckhannon County.

The Pringle brothers almost certainly survived off of hunting and gathering food. Sometime around 1765 or the fall of 1767, with their ammunition running low, John risked returning to their South Branch home to acquire more supplies. Upon arrival, he learned that the war had ended, and that he and his brother were no longer wanted for deserting. By 1768 John had returned to inform Samuel of the new developments, and they decided to go back home. Later in 1769 Samuel and his wife Charity led a group of families to Buckhannon to establish a permanent settlement. These included Thomas Hughes, John Cutright, and the Jackson family; other sources also include the Radcliff family, the Sleeth family, and John Hacker (who would settle at Hacker’s Creek in Lewis County).

Open from May 1st to November 1st.