Born near Fairmont, Virginia (now West Virginia) in 1794, Thomas Sherwood Haymond was a lawyer and veteran of two wars. As a young man, he attended private schools before enrolling at the College of William and Mary in Williamsburg, Virginia. Haymond volunteered to fight in the War of 1812, serving as a private. Shortly thereafter, he read law and gained admission to the bar in 1815. A slaveowner and member of the Whig Party, Haymond was elected to the U.S. House of Representatives, serving from November 1849 to March 1851. During the secession crisis, he served on the advisory council that aided Governor John Letcher with Virginia’s preparations for war. Haymond then secured a commission as a colonel and served as an officer in the Confederate Army for the entirety of the Civil War. He died in Richmond, Virginia on April 5, 1869. His remains were buried in Palatine Cemetery, which is now part of Maple Grove Cemetery, in Fairmont. 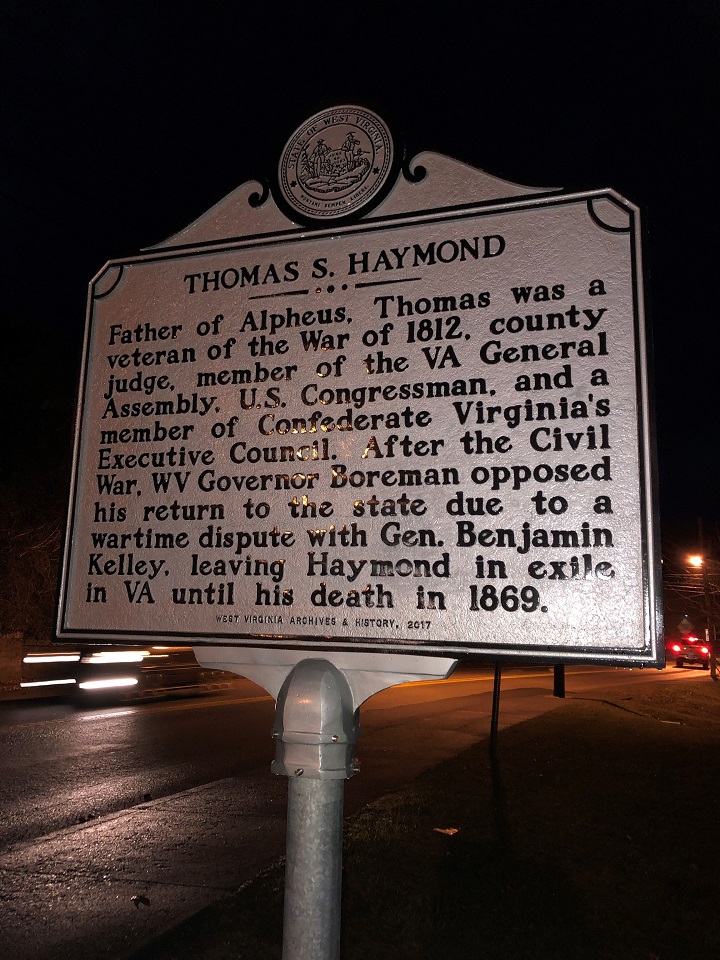 Thomas Sherwood Haymond was born to an esteemed and prosperous family of English origin on January 15, 1794 near Fairmont, Virginia (now West Virginia). His paternal grandfather, Major William Haymond (1740-1821), served with Generals Braddock and Forbes during the French and Indian War. His father, William Calder Haymond (1771-1848), fought Native Americans along the Monongalia frontier. His mother, Cynthia (Carroll) Haymond, was a relative of Charles Carroll, a signer of the Declaration of Independence.

As a young man, Haymond attended private schools before enrolling at the College of William and Mary in Williamsburg, Virginia. During the War of 1812, he continued the family military tradition by volunteering to fight for his country, serving as a private. Following his time in the military, Haymond read law and gained admission to the bar in 1815. Shortly thereafter, he began practicing law in Morgantown. In 1822, Haymond married Harriet Franklin (1801-1857). The marriage produced many children, including Alpheus F. Haymond (1823-1893), who not only followed in his father’s footsteps by attending William and Mary and practicing law, but also represented Marion County in the Virginia House of Delegates and served as a justice on the West Virginia Supreme Court of Appeals.

In 1842, Haymond became president of the county court of newly-formed Marion County. Several years later, he was elected to the U.S. House of Representatives to fill the vacancy created by the death of Alexander Newman. A member of the Whig Party, Haymond served from November 1849 to March 1851. Most notably, during his time in the House, he broke with many of his colleagues from Virginia when, in May 1850, he spoke in favor of California’s admission to the Union as a free state.

Haymond’s support for a soon-to-be free state’s admission to the Union came despite the fact that he was a slaveholder. In 1830, census returns indicate that he owned seven enslaved individuals. By 1850, Haymond owned four. This reduction in the number of enslaved individuals that he owned was not due to declining personal fortune. In fact, Haymond’s wealth increased over the course of the late antebellum era. In 1850, he held $15,000 in real estate. By 1860, he doubled that and owned an additional $10,00 in personal estate.

When Virginia voted to secede from the Union in April 1861, Haymond followed the course of his native state. A few days later, delegates to the convention created an advisory council to aid the governor with preparations for war. Governor John Letcher appointed Haymond to the council, which, among other things, recommended that Robert E. Lee lead the state’s forces. Soon after, Haymond secured a commission as a colonel. He would serve as an officer in the Confederate Army for the entirety of the war. On April 5, 1869, Haymond died in Richmond, Virginia. His remains were buried in Palatine Cemetery, which is now part of Maple Grove Cemetery, in Fairmont.

In 2017, as part of its Civil War sesquicentennial project, the West Virginia Highway Historical Marker Program of the West Virginia Archives and History erected a marker dedicated to Thomas S. Haymond. It stands at the intersection of U.S. 19 and Maple Avenue in Fairmont, Marion County.