Most people are familiar with the twelve avenues that run the length of the island of Manhattan from North to South. However, during the 1830s, a shortage of coastline and influx of ships prompted the creation of a thirteenth avenue in the area that is now Chelsea Piers. The initial idea was for this 13th Av. to extend the length of the island, up to 135th Street, but most believe this expectation was unrealistic from the outset. 13th Av. ran only 12 blocks, was partially paved, and was primarily packed full of lumber and ice coming into the city. Today, only one small block of 13th Avenue remains – it exists under the parking lot which is owned by the NYC Department of Sanitation. Developers are planning to convert this lot into a public park which would include the restoration, in its original location, of a 13th Avenue promenade (1). 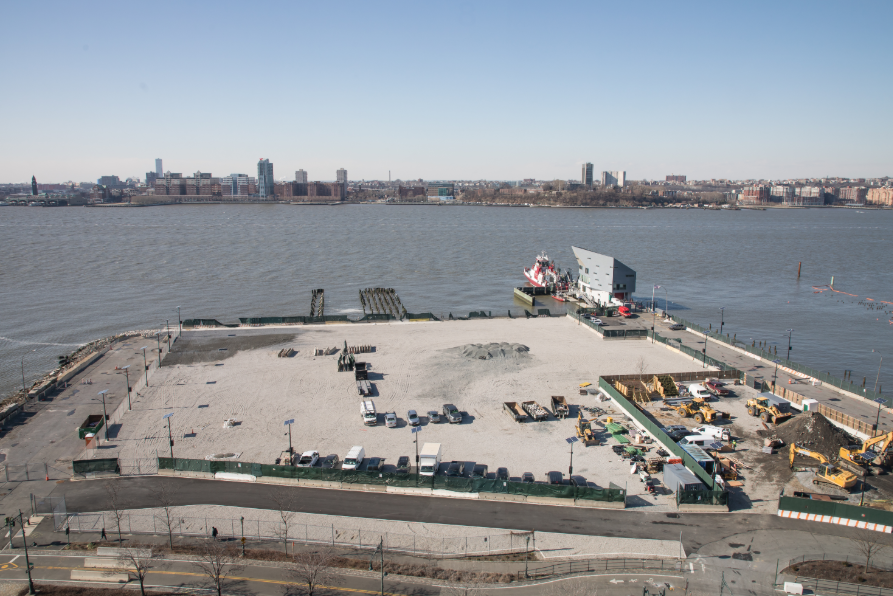 This photo overlays the modern Gansevoort Peninsula atop the historic area of 13th Avenue, developers plan to retain some elements of the original 13th Avenue in the site's development 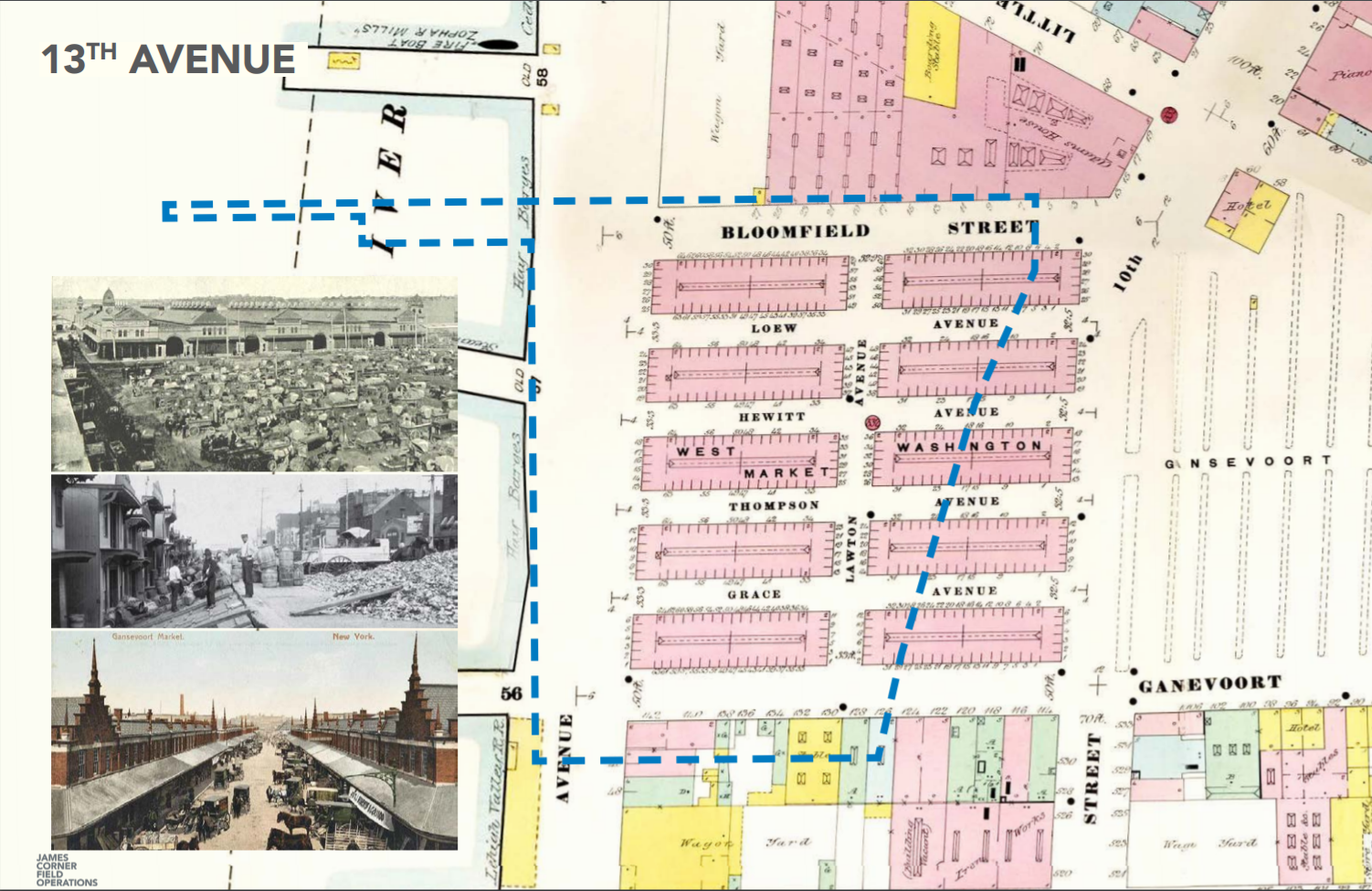 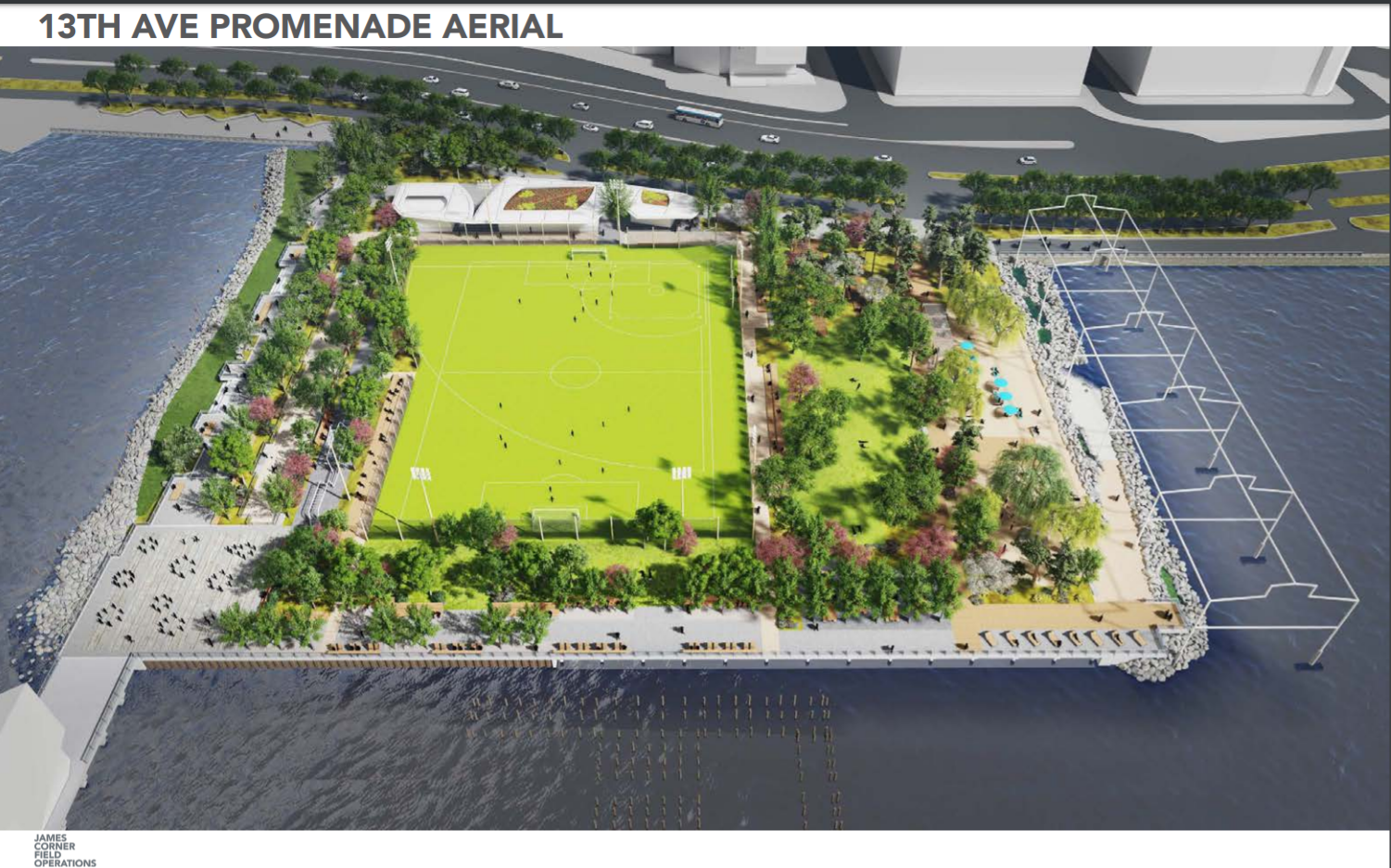 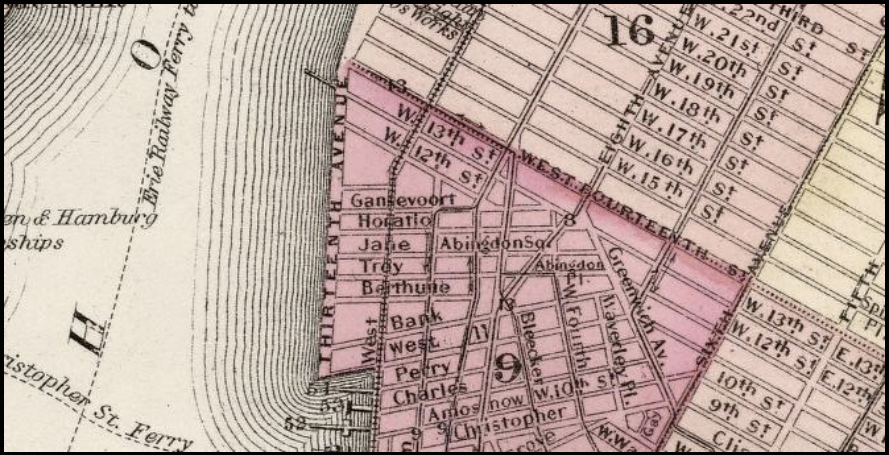 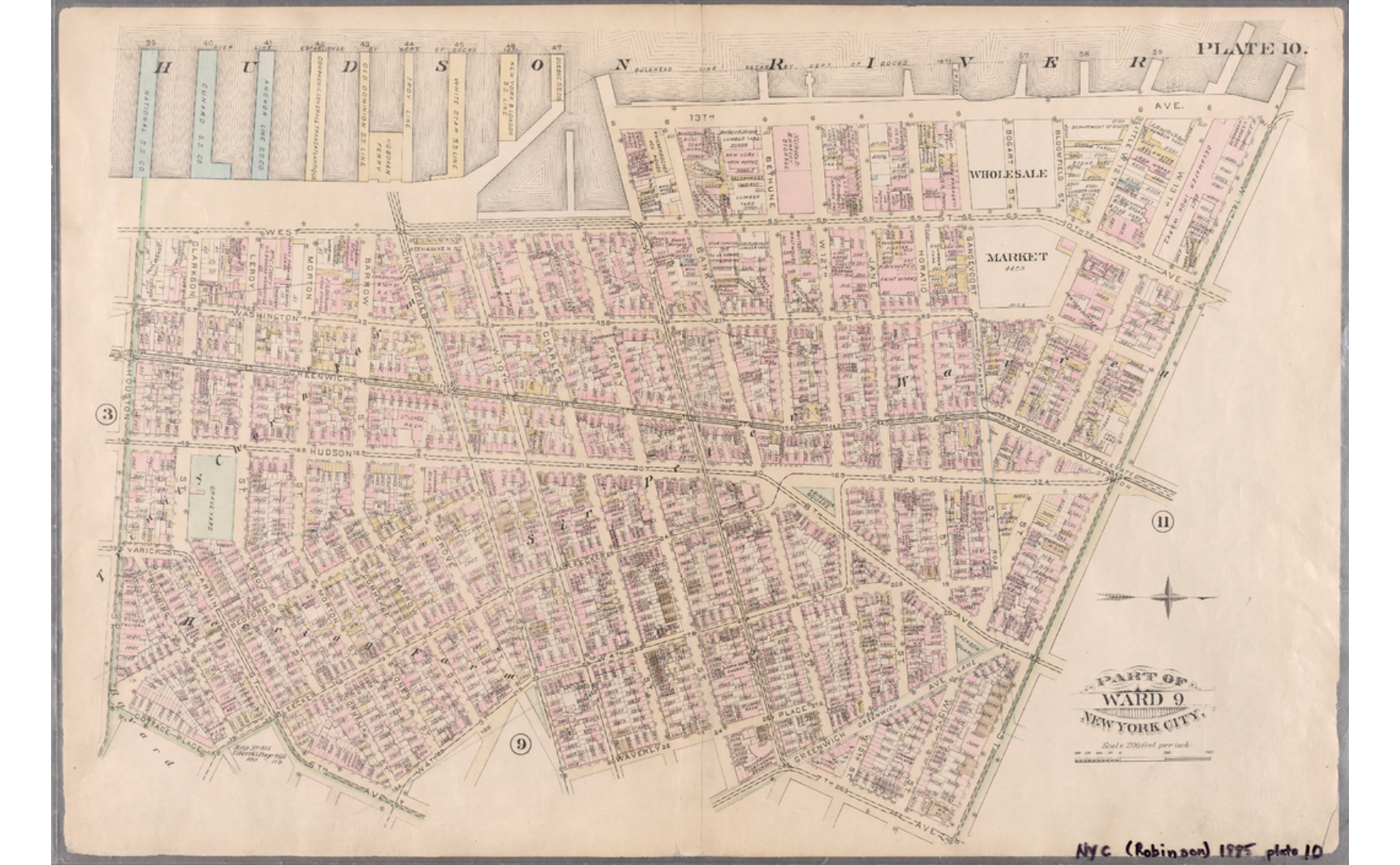 Manhattan’s Thirteenth Avenue originally “ran from Bloomfield Street on what is now the Gansevoort Peninsula, north to 23rd Street” (2). The 13th Avenue was slightly less than a dozen blocks long and divided into two sections (3). The avenue was created on April 12, 1837 after the New York State legislature passed an act to, “establish a permanent exterior street in the city of New-York along the easterly shore of the North, or Hudson’s River” (6). The avenue would be created by simple land filling techniques.

The New York Times described the newly created avenue in a November 1883 article entitled, “A Very Peculiar Avenue” with the subtitle, “A westside thoroughfare of little account” (4). According to this same article, 13th Avenue began with a pile of lumber and dirt and gradually broadened to become a wider, more “respectable” street (4). The avenue ended unceremoniously between 26th and 27th streets, after a mere 12 blocks, with a high, wooden fence. 13th Avenue branched off from 11th Avenue around West 11th Street. After branching off from 11th Avenue, 13th continued on in what the Times called a “dreary waste” of “dirt and cinders” which completely obscured the pavement below (4). The avenue continued in such a manner until around 23rd Street where it “suddenly awakens into life” (4). This was the location of the Pavonia ferry house, and at this spot the pavement became broad and flat, “no better place for bicycles could be found” (4). The author notes that through the fence boards at the end of the avenue, a pedestrian could observe an entirely different world of, “stagnant water”, “decaying docks”, “squatter settlements and shabby-looking factories” (4). The functional docks along 13th Avenue were primarily used to unload lumber, bricks, ice, and coal (4). The Knickerbocker Ice Company had a significant presence on the avenue, along with several other major ice distributors (5).

On 13th Avenue, the buildings themselves were often small and squat, but the piles of lumber were stacked to such a height that they rivaled the tallest buildings on the neighboring streets, and the author notes that, “The Leaning Tower of Pisa has been copied as nearly as possible in the architecture of these lumber piles” (4). The avenue was nearly desolate at night, poorly lit and uninhabited, the Times’ author notes that, “police avoid it scrupulously” (4). However, at the northernmost end of the avenue in the summer, rowboats were let out by the hour and had become quite popular (5). Several other prominent docks existed along 13th Avenue, including the 23rd Street Ferry and the Coney Island iron steamboat landing (5). Near 14th Street was another ferry, crossing over to Hoboken. This ferry terminal was adjacent to one of the saloons that dotted 13th Avenue; however, this establishment was unique in that it was located within a six-story brick factory (5).

Although it had begun to develop a life and certain sort of character, the turn of the century brought changing City priorities that would ultimately lead to the end of 13th Avenue. Namely, the City was interested in building deep-water piers along the Hudson to accommodate increasingly large luxury ships (such as the Lusitania and Titanic) (6). The City began excavating 13th Avenue in order to construct these new piers, and the area today is known as Chelsea Piers (6). There is a small portion of Thirteenth Avenue which remains to this day, “If you cross the West Side Highway at Gansevoort Street, you reach a sanitation pier (and the name of the road officially changes to Bloomfield Street). If you were able to get to the sanitation parking lot along the river’s edge, you would be on the only remaining block of Thirteenth Avenue” (6). As of July 2019, updates on the construction work which is currently ongoing at the Gansevoort Peninsula report that the former Thirteenth Avenue will be preserved once this area is redeveloped for park use.