The Berkeley Municipal Rose Garden was created as part of a federal Works Progress Administration (WPA) project, which provided jobs during the Great Depression. After breaking ground in 1933, the project took four years to complete, and the garden was opened to the public in 1937. Winners of the All-American Rose Society contest continue to receive the honor of having their prize-winning roses planted in the garden. Additionally, the garden features roses from around the world. In 1995, the garden was designated as a City of Berkeley Landmark. Today, it is a favorite site for weddings and special events. It is maintained with help from the Friends of the Berkeley Rose Garden. 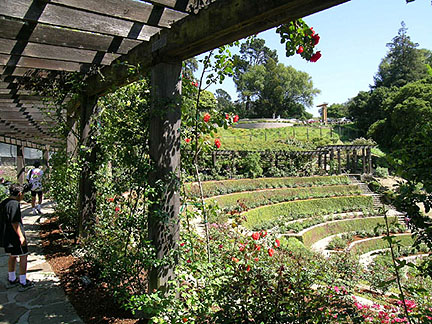 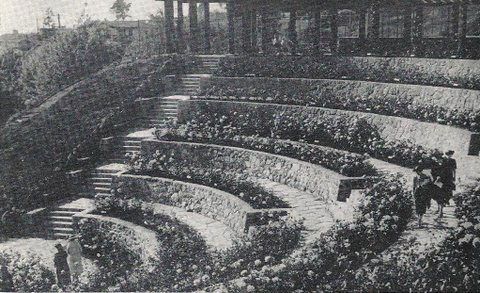 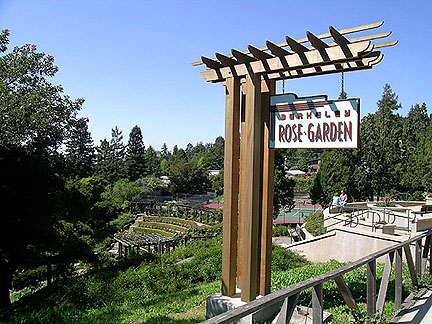 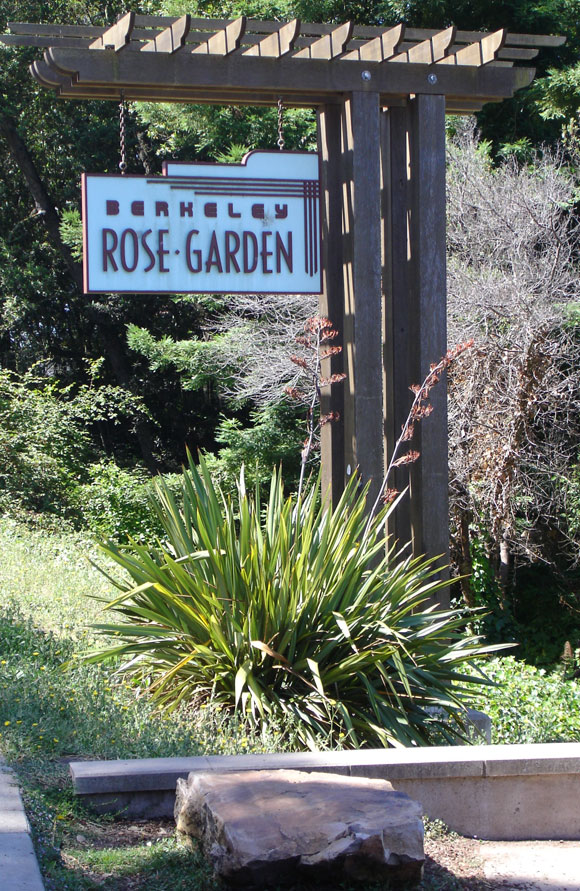 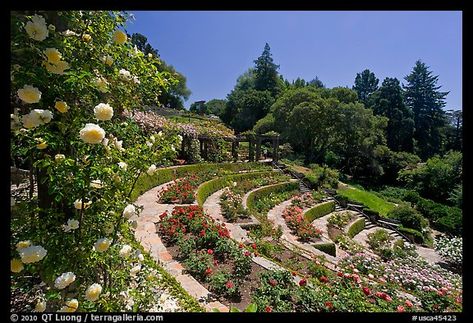 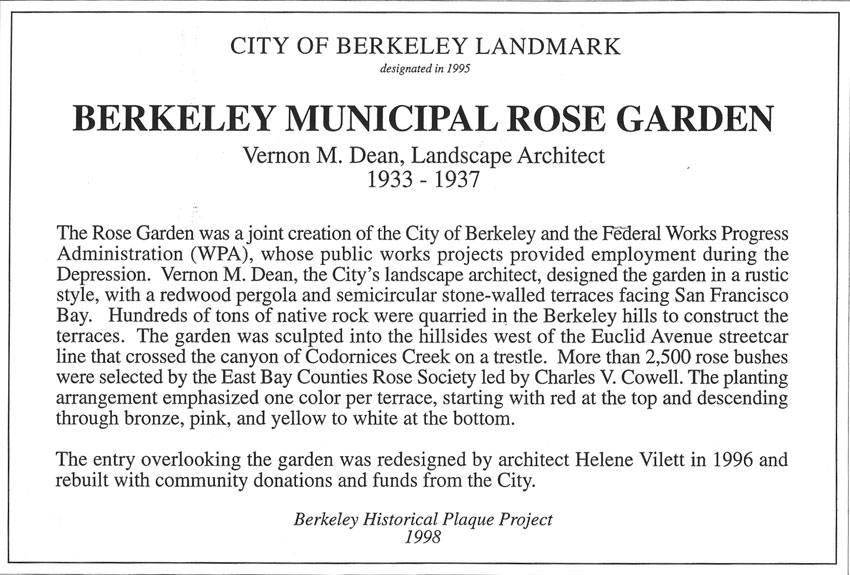 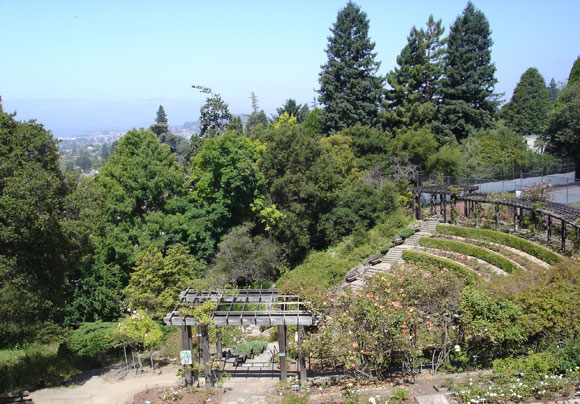 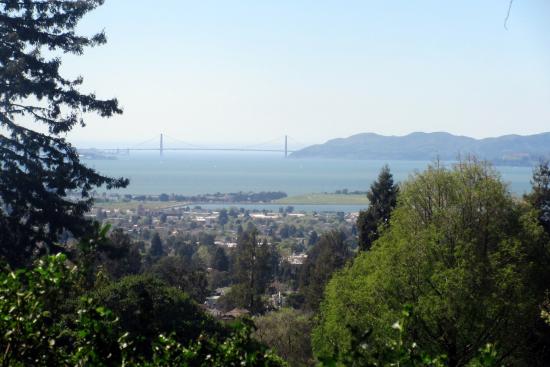 The Berkeley Municipal Rose Garden is nestled within a canyon called the El Valle de los Codornices (Valley of the Quails). In the 1870s, entrepreneurs bottled water within this canyon from a nearby creek for sale to the public. Later, a private neighborhood park and clubhouse, the Codonices Club, was established at this location in 1913. In the early twentieth century, an electric streetcar trestle spanned the canyon to transport people across the valley. However, this trestle was removed in the 1920s, and it was instead replaced by a land bridge.

The creation of the Berkeley Municipal Rose Garden was one of the earliest government-sponsored Works Progress Administration (WPA) projects in the 1930s. This federal program was intended to generate new jobs across the country at a time when at least a third of the country's work force found itself fully unemployed in the midst of the Great Depression. Although construction of the garden commenced in 1933, it was not fully completed until 1937. The project was a considerable undertaking, as it included grading and drainage to create a dramatic amphitheater-style garden, with wide, semi-circular stone terraces.

City of Berkeley landscape architect Vernon M. Dean was responsible for designing and planning the overall layout of the site, while Charles W. Cresswell oversaw the construction of the project on behalf of the Berkeley Parks and Recreation Department. Horticultural expert and rosarian C.V. Covell selected the 250 specific varieties of rose bushes to be planted. The East Bay Rose Society planned the layout of the rose bushes, which numbered nearly 3,000 in total.

Members of the East Bay Rose Society approached the planning process from horticultural as well as aesthetic perspectives. Each terrace was laid out to highlight a distinct color of rose. The highest tiers within the terraced amphitheater feature red roses, while pink and bronze roses appear in descending order, giving way to white and yellow roses at the lowest elevation. The Rose Society, in conjunction with other community volunteers, donated numerous hours to ensure the successful planting and maintenance of the rose bushes while the project was underway and in the years thereafter.

The unique location of the rose garden within a canyon and the terraced amphitheater layout of the garden helps to ensure that the rosebushes are partially protected from the wind and the elements. The semi-circular stone terraces also provide a striking view of the San Francisco Bay. In addition, a 220-foot long pergola constructed from local California Redwood extends in a semi-circle the full width of the garden. Its design was suggested by the prominent Bay Area architect and Berkeley resident, Bernard Maybeck. This redwood pergola provides further visual interest, as well as structural support for the climbing varieties of rose bushes which are featured in the garden.

Adjacent to the amphitheater are four tennis courts, picturesque hiking trails, and picnic tables. Additionally, a decorative pool provides water for the rose bushes in the garden. This pool is fed from the nearby Codornices Creek. Each of these features is maintained by the City of Berkeley as part of this municipal site. In 1995, the rose garden was designated as a City of Berkeley Landmark and Helen Vilette was commissioned to create a new entryway for the garden, which further beautified the space. Today, the Friends of the Berkeley Rose Garden help to maintain the site, which is a popular location for weddings and other special events. In particular, Mother's Day is considered the "peak" of the rose-blooming season. The rose bushes are pruned each January in anticipation of the arrival of many visitors who visit the garden each May.

Dawn to Dusk, unless otherwise noted (as during special events)