Dedicated in 2011, this monument commemorates Fort McIntosh, the first fort built by American colonists north of the Ohio River during the American Revolution. General Lachlan McIntosh made this fort the headquarters of his small force, but this isolated army also constituted one of the biggest armies west of the Allegheny Mountains. The fort was the site of the signing of the “Treaty of Fort McIntosh” between the representatives of Indian nations from the surrounding area and treaty commissioners. The treaty accelerated western expansion and led to the closure of this fort and the loss of autonomy and land for area Native American tribes. 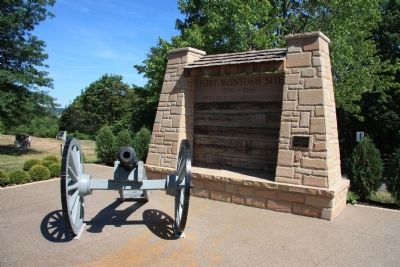 Traced signatures of the original Treaty of Fort McIntosh, now in the Pennsylvania State Library in Harrisburg 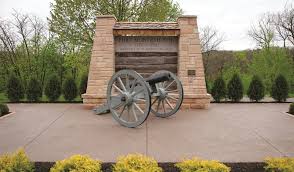 Built in 1778 above the Ohio River in what is now Beaver, Pennsylvania, Fort McIntosh was commanded by General Lachlan McIntosh. McIntosh is best known today as a duelist who killed one of the signers of the Declaration of Independence, but at this time he had been recently assigned by General George Washington as commander of the Western Department of the Continental Army.

The fort was built to protect the colonist's western frontier from potential Native American attacks and also reduce the likelihood of a British invasion. Not only was it the first Continental Army-constructed fort north of the Ohio River, it was also a direct challenge to Britain and their stronghold of forts in the area of Detroit. The army Lachlan commanded was small in comparison to many others, but Fort McIntosh was home to one of the largest armies west of the Alleghenies, with approximately 1,500 men serving in the area. When the American Revolution ended in 1783, the fort was occupied by only a small number of state militias and supply troops from Fort Pitt and West Point. After the Revolution, the forces here were proclaimed as the First American Regiment by Colonel Josiah Harmar and represented the first permanent peacetime home of the U.S. Army. Although no fighting went on at the location, it is the site of another historic event, the signing of the Treaty of Fort McIntosh.

The treaty inspired Congress in drafting the Land Ordinance of 1785, which set up a system that allowed for settlers to move to the west and purchase land of their own. The treaty was between the United States government and representatives of the Wyandot, Lenape (Delaware), Ojibwa (Chippewa), and Ottawa nations of the surrounding Native American lands. The terms of the treaty and negotiations themselves were not honored in future years. In addition, Native American tribes considered the treaty to be illegitimate as the representatives present were not chiefs and therefore not able to create a binding treaty. In fact, many of the Native Americans were young and did not have authority to negotiate any type of treaty, especially one of this magnitude. Furthermore, colonists may have also used alcohol provided by the American commissioners, Colonel George Rogers Clark and others to influence the representatives of Native Tribes. Some of the most influential military leaders were part of this one-sided treaty, including Richard Butler who led Pennsylvania Continentals at Saratoga, Stony Point, and Yorktown, and Arthur Lee, one of the commissioners who negotiated the French Alliance.

After being de-commissioned in 1788 after 10 years of service, the fort was finally abandoned in 1791, as the frontier was able to push west due to the Treaty of Fort McIntosh. In 1893, Judge Daniel Agnew of Beaver County published Fort McIntosh and Its Times with hope of getting the community interested in the history of the fort and preserving it. In 1974, plans became action when the University of Pittsburgh, Carnegie Museum, and local archaeologists began to excavate and locate the fort’s remains. The excavation lasted four years and over 80,000 identifiable remains and artifacts were located. On the 200th anniversary of Fort McIntosh’s construction, the site was dedicated on October 7, 1978 by U.S. Army General William Westmoreland and the Beaver Heritage Foundation.

Thanks to archaeological studies, many of the locations of barriers of the original fort along with fireplace and wall footers have been marked with bronze plaques. On May 7, 2011, this monument was erected at the western boundary of the fort. Eight other markers within walking distance designate other parts of Fort McIntosh.