In a time when African Americans demonstrated the demand for their Civil Rights- protests, riots, and sit-ins were prevalent. Among these demonstrations, a sit-in in Annapolis, Maryland exposes the pure dedication of Civil Rights advocates; one of which was Marita Carroll. The hopeful revolt at a local restaurant in downtown “Naptown” transpired on November 11, 1960; during a time when African Americans were steadfast in conquering inequality. In commemoration of this archival moment as well as the faithful people associated, a plaque is arranged at 126 West Street where the Terminal Restaurant used to be.

The Plaque memorializing the advocates of the Annapolis Sit-In 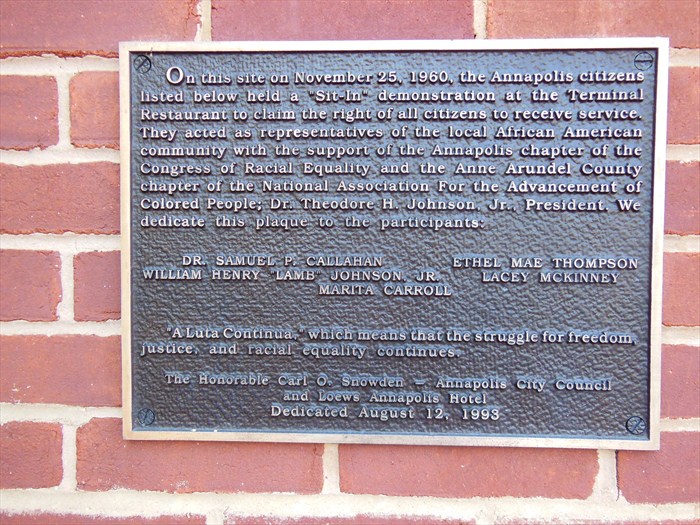 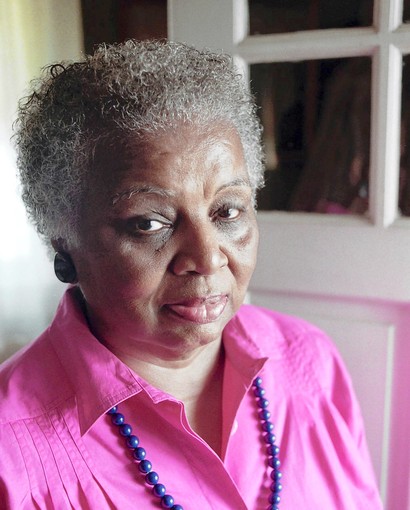 The marker in Annapolis memorializing the sit-in of a few “Naptown” citizens embodies the dedication and representation of the Civil Rights Movement. A local well-known restaurant located downtown was a popular midday meal hot-spot. However, the restaurant only served to whites; while blacks had to wait outside in a line to receive their meal through a window. After becoming fed up with the lack of service as a regular customer, Marita Carroll was inspired to rally against Terminal Restaurant.

Marita Carroll, who had grown up in Annapolis, “was a teacher by trade, having started her career in a one-room segregated school in South County.” Marita was described as a “peaceful” person, however, her toleration of discrimination was busting at the seams. Encouraged by the Greensboro Sit-ins in North Carolina, she joined the movement. “She became part of a movement that began in February 1960, when four black college students in Greensboro, N.C., defied segregation by taking seats at a Woolworth lunch counter.” After Thanksgiving in 1961, Marita and four more residents decided to unite in the campaign in Anne Arundel County Maryland.

“The two women and three men walked into the Terminal Restaurant on West Street, now the site of the Loews Annapolis Hotel. They took seats at the counter. They asked to be served.” Unwavering confidence and desire to break injustice, Marita Carroll, Dr. Samuel P. Callahan, Ethel Mae Thompson, William Henry “Lamb” Johnson Jr., and Lacy McKinney demanded dining-in service. The waiter expressed that there was no way he was going to service them, which left the demonstrators yearning for more. "We said we wouldn't leave. He called the police. They came and read us the Trespass Act. We still refused to leave. So we were arrested."

They were escorted to the city’s jail, nonetheless, Marita describes that they weren’t mistreated nor were they handcuffed. Upon posting bail on behalf of Johnson, who was a bail bondsman, the five were released. “They went straight to the home of Callahan, an Annapolis dentist, made some picket signs and headed back out to a doughnut shop on West Street, owned by the same man who managed the Terminal Restaurant.”

The demonstrations continued on for weeks; the advocates remained relentless. “By 1963, Carroll said, most restaurants and theaters in Annapolis had lifted racial barriers. That year, Carroll started teaching the first integrated groups of children at Eastport Elementary School, after the black school in Eastport was closed.” This plaque displayed at 126 West Street where the Terminal Restaurant used to stand, exemplifies the unyielding fight by these Annapolis residents who served the movement. Because of them and their bravery, and many others advocates of the movement, the Civil Rights Movement made a permanent mark on society as well as the future of the United States of America.