The Hampton National Guard Armory was constructed in 1936 as part of a Works Progress Administration program. The massive structure contains 300,000 red bricks with almost 12,000 square feet of space. The Moderne Style building's main façade is eleven bays wide and two stories tall. Two large buttresses flank the entrance, topped by a stone relief of an eagle holding two rifles in its talons. The armory was listed in the National Register of Historic Places in 2016 and is locally significant for its architectural style and for the rarity of armories constructed between World Wars I and II in the Hampton Roads area. The building hasn't been used as an armory since 1993 and has been adapted for re-use as the Vanguard Brewpub and Distillery. 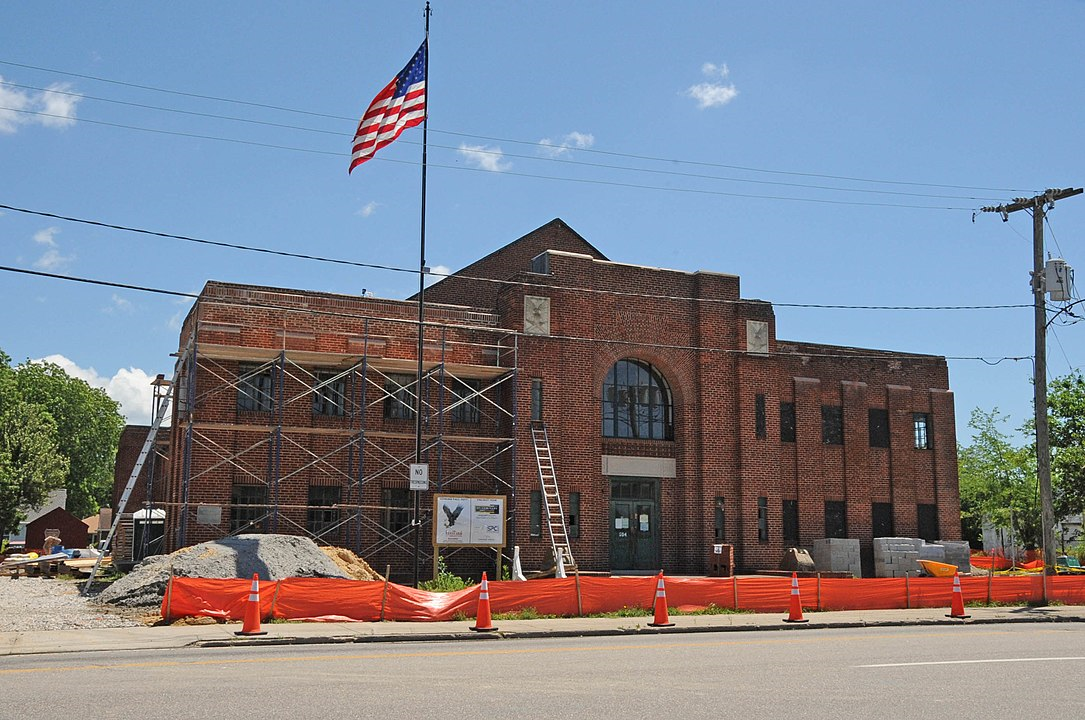 The Hampton National Guard Armory was built in downtown Hampton in 1936 for Battery D, 111th field artillery. The unit reorganized in 1924 after World War I and was forced from its headquarters by a fire. The next site used by the unit was a renovated former county garage that proved inadequate for meeting and training needs. Like the typical aramories of its day, the building was designed for use as a community meeting place and gymnasium when not in use for military purposes.

The chosen site was cleared by Works Progress Administration workers in March 1936, across from an ice cream plant. The plain red construction bricks were made locally, while the red tapestry bricks for the façade came from Roanoke, Virginia. A hurricane delayed the finishing of the building exterior until the fall of 1936. The interiors were completed by early March 1937. The main entrance doorway is decorated with an inscribed stone lintel reading "US/NG" and "Virginia National Guard." The interior contains office space in the front part of the building. The central open space designed for drilling measures 70 by 90 feet with a painted brick interior, with a stage on one side, overlooked by a full-width mezzanine. The rear of the building contained a kitchen space, restroom, and a dressing room and is the only part of the building to have a basement.

A local remembered that the building was used for community purposes but was segregated historically, with events for Whites held separately form those for African-Americans. The building last served as a military armory in 1993. Most of the armory's metal casement windows had been boarded up from the exterior when the abandoned building was studied in 2015. The flat roof behind the parapet walls has failed in several places, damaging the interior plasterwork and wooden flooring.

The Hampton National Guard Armory was one of three local armories built by the WPA in 1936. However, the Newport News Armory was demolished in the late twentieth century and the Portsmouth Armory has lost most of its architectural integrity due to exterior stuccoing and the removal and filling in of window spaces. Several nearly-identical buildings from the era survive elsewhere in Virginia, but none in this part of the state. The historic lot of 1.25 acres is the boundary for the National Register of Historic Places listing, dating to 2016.The armory also was listed on the Virginia Landmarks Register in 2016.

The building is being given a second life as the Vanguard Brewpub and Distillery. The company has kept the building's industrial style while providing a "communal center of live entertainment, craft brewing and small-batch distilling" of Caiseal Beer & Spirits. The Vanguard's website is linked below, with upcoming free musical events. Check them out, and thank them for saving this historic building!