This historical marker recognizes the Scottish writer, Robert Louis Stevenson, author of Treasure Island. Stevenson briefly lived at this location during a period of four months between December 1879 and March 1880. As stated on the marker, he lodged at 608 Bush Street, where he wrote essays, poems, autobiographies, and fiction. Although best known for his fiction and poetry, Stevenson also wrote candidly about his own life through several travel essays and autobiographies. In his book, The Amateur Emigrant, published in 1895, Stevenson described his journey to California from Scotland, as well as the challenges of his daily life in San Francisco. This historical marker was erected by the California Historical Society in 1972. 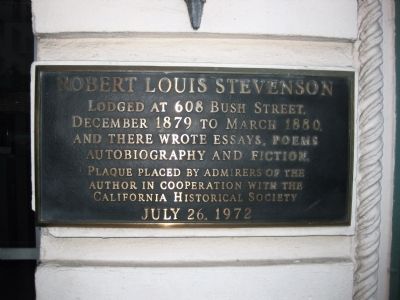 "A Child's Garden of Verses" by Robert Louis Stevenson, Illustrated by Tasha Tudor (Originally published in 1885; still in print today) 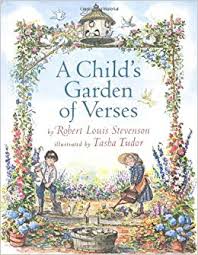 Bell Rock Lighthouse, Scotland, built in 1811 by Robert Louis Stevenson's grandfather, the subject of a biographical work of non-fiction by RLS titled "Records of a Family of Engineers" (1896) 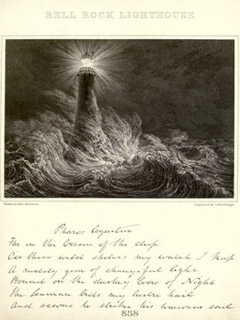 Robert Louis Stevenson was born in Edinburgh, Scotland, in 1850. At age 12, he embarked with his parents on a five month tour of Europe. At age 16, he self-published his first novel with financial help from his father. The following year, he began a training program to become a lighthouse engineer, a profession shared by early generations of men in his family. Before fully committing to a career in writing, Stevenson also formally studied law at Edinburgh University beginning in 1871. He successfully passed the Scottish Bar Examination in 1875.

Throughout his adult life, Stevenson wrote novels, plays, short stories, poetry, autobiographies, travel narratives, and other essays. However, he is best known for his works of fiction, in particular his novel Treasure Island, published in 1883. He is also well known for his novella, Strange Case of Dr. Jekyll and Mr. Hyde, published in 1886. In addition to these popular works of fiction, which still continue to be read as well as adapted for various media, Stevenson is also remembered for his poetry collection, A Child's Garden of Verses.

In his book, The Amateur Emigrant, published in 1895, Stevenson wrote candidly about his journey from Scotland to San Francisco, including many details of his journey across the United States to reach the west coast of California. In this particular travel narrative, Stevenson described his time living in San Francisco, highlighting some of the challenges that he faced while working as a writer in the city. For example, he described himself subsisting "all alone on forty-five cents a day, and sometimes less, with quantities of hard work and many heavy thoughts."

In actuality, Stevenson came to San Francisco in December 1879 to be near Fanny van de Grift Osbourne, a married woman with whom he fell in love in Paris in 1877. Upon his relocation to San Francisco, Fanny divorced her husband and she soon became Stevenson's wife. Following their marriage in May 1880, the couple left San Francisco. Along with Fanny's son Lloyd, the family spent the summer of 1880 living on Mount Saint Helena in Napa Valley, California. Stevenson documented several aspects of this experience in his autobiographical travel essay, The Silverado Squatters.

In the months of his early arrival in San Francisco just before his marriage to Fanny, Stevenson is known to have stayed in an apartment located at 608 Bush Street while he lived in the city. However, it is likely that his apartment was actually located in a building that was destroyed in the Great Earthquake of 1906. Thus, the newer building on Bush Street on which the historical maker was mounted most likely did not yet exist when Stevenson was living there.

In 1888, Stevenson and his family (Fanny and Lloyd) sailed across the Pacific Ocean, making extended stays on the Hawaiian islands. Eventually, they settled on the island of Samoa in 1890, where they stayed until his death in 1894 at the age of 44. He was buried on the summit of Mount Vaea, and a path to the top of the mountain was cleared during the night in order to prepare for his burial.

In recent decades, Stevenson's popular book, Treasure Island, has been adapted multiple times for film, theater, and television. In addition, his novella, Strange Case of Dr. Jekyll and Mr. Hyde, has been adapted for film and theater, including in a musical format for Broadway, where it was called simply Jekyll & Hyde. This novella has been studied at length by analytical psychologists, as well as literary critics. Finally, Stevenson's popular poetry collection for children, titled A Garden of Verses, also remains in print today. This is a rare occurrence for a children's poetry anthology, and the hallmark of a classic work of literature.