The Crook County Historical Society was established in 1969 and has operated a museum in the historic Bowman Building since 1971. The building served as the Crook County Bank for many years and was later donated by the Bowman family under the condition that it would be used as a museum. The historical society also operates an annex museum called the Rancher's Memorial which houses exhibits and ranch equipment. 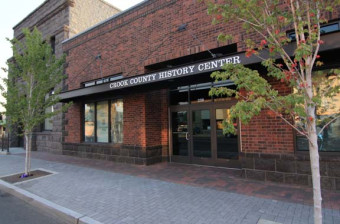 Early image of the Bowman Memorial Museum from when it was a bank. 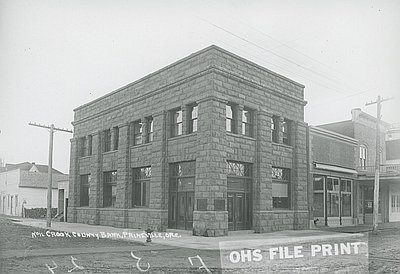 The Crook County Historical Society was established in 1969. Prior to 1969, there was few records of Prineville, Oregon, or Crook County. Alta Bowman, Jean Clark, and Elaine Broten donated the Bowman Building to the historical society in 1971. It was donated with the condition that it would be used as a museum building, so the Bowman Building became the A. R. Bowman Memorial Museum. The museum was originally the Crook County Bank, which opened in 1904 and operated until it closed during the Great Depression in 1931. The Crook County Historical Society expanded its facility in 1992 by building an addition on the rear. The addition housed a research library and storage space for its collections.

Image from the Oregon Encyclopedia.