Once a cemetery for victims of malaria in 1821, this historical marker shares the story of an unmarked cemetery outside of the Indiana University School of Medicine's Van Nuys Medical Science Building and its connection to the history of infectious disease. Robert Barnhill was one of the first people to be buried in the cemetery is also the namesake of the road that connects residents to the burial ground. Barnhill was one of the first settlers of European descent to settle in Indianapolis. While no headstones have been preserved and the former burial ground is now home to a medical building, this historical marker reminds visitors of the deadly plague and the mass grave that was located just 150 feet from Robert Barnhill's cabin. 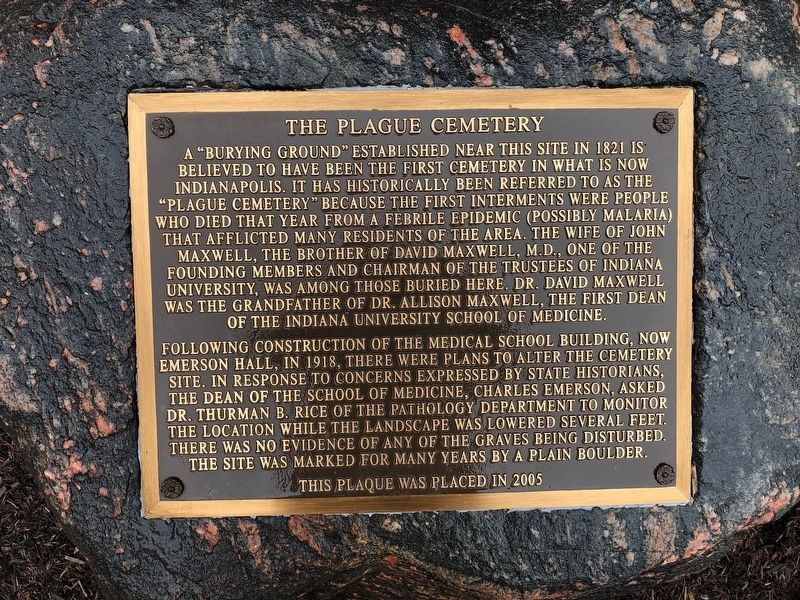 Photograph of the Plague Cemetery historical marker on its boulder base. 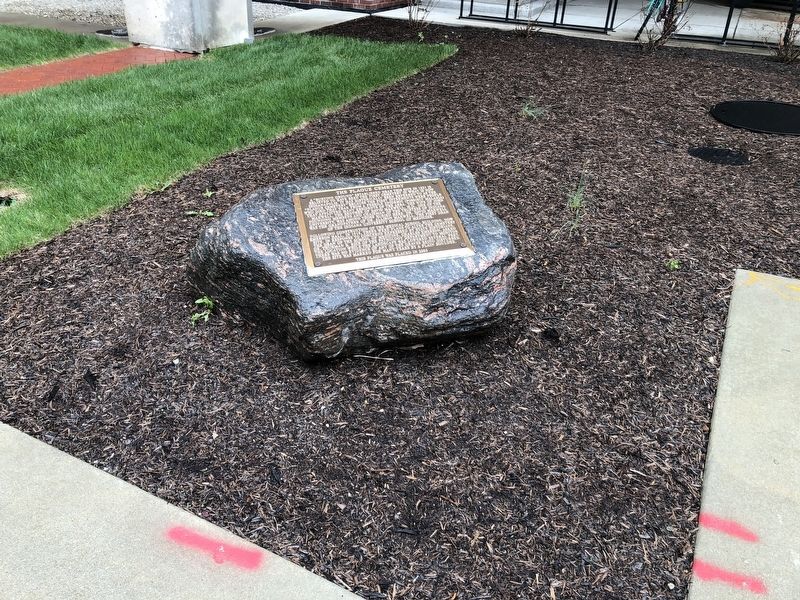 Established in 1821, this site is believed to be the first burial ground for settlers of European descent in Indianapolis. Barnhill Drive was named after Robert Barnhill, one of the first settlers of European descent to arrive in present-day Marion County, Indiana. He arrived on March 6, 1820, after moving his wife, Sarah Marvis Barnhill and 12 children from Butler County, Ohio. This cemetery was called a "plague cemetery" because the first people buried here died from a febrile epidemic. The ailment was likely malaria, although this has not yet been able to be confirmed by scholars based on the lack of available physical and archival evidence. However, it is clear that starting in 1821, residents of this area began to get sick with a high fever following a season of heavy rainfall. This factor and others lead scholars to conclude that the disease was likely malaria.

Robert Barnhill was one of the residents who died from the illness and was buried in the plague cemetery that was located about 150 feet from Barnhill's log cabin. Originally, the cemetery had less than ten graves, but it was used afterward as well. There is no exact record of how many people were buried in the cemetery. For many years, the cemetery was only marked by a plain boulder.Today, the burial site, which does not have gravestones but does have a historical marker, is where the Van Nuys Medical Science Building is today on Barnhill Drive. The Van Nuys Medical Science Building, named after Dean Van Nuys, is part of the Indiana University School of Medicine.

Image by Devry Becker Jones at the Historical Marker Database.

Image by Devry Becker Jones at the Historical Marker Database.