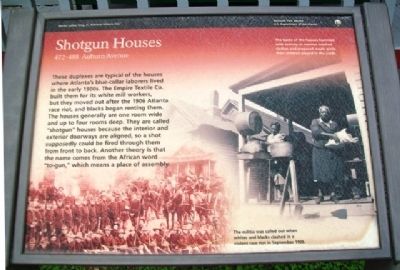 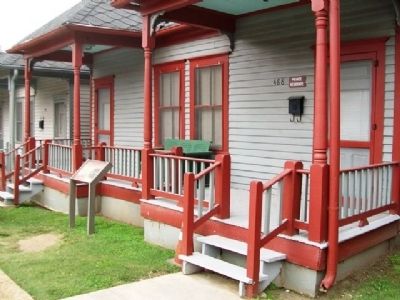 The Shotgun Houses are located at 472-488 Auburn Avenue NE in Atlanta, Georgia, and the historical marker and plaque are located in front of 488 Auburn Avenue. Shotgun houses are usually one room wide and up to four rooms deep. Usually, there are 3 to 5 rooms without a hallway. On Auburn Avenue, the shotgun houses are joined together and share a wall. In addition, two theories exist explaining the name. One is that a shot could be fired from front to back because the interior and exterior doorways line up. A second theory is that the name comes from "to-gun," an African word that means place of assembly. Originally the duplex-style homes housed blue-collar laborers in Atlanta, Georgia, in the early 20th century. White mill workers from the Empire Textile Company (also referred to the Empire State Investment Company in some sources) lived in the shotgun houses. However, after the 1906 Atlanta race riot, the white workers moved out, and African Americans began renting the homes. By 1910, the shotgun houses were entirely owned by African Americans.

The Atlanta Race Riot of 1906 took place from September 22-24, 1906, after local newspapers alleged that African American males assaulted white females. There were, however, more causes of the riot. For instance, Atlanta's population grew drastically between 1880 and 1910, meaning that there was increased job competition between African American and white workers. White elites did not want the races mingling either, so Jim Crow segregation was expanded, especially in neighborhoods and public transportation. With the new right to vote during Reconstruction, African Americans were also more active politically and economically. Candidates in the 1906 race for governor played on the white population's fears of a Black upper class. Hoke Smith and Clark Howell, who both owned newspapers, swayed public opinion through their respective newspapers. Other newspapers not owned by Smith or Howell also spread stories that white women were assaulted by African Americans.

Image courtesy of William Fischer from the Historical Marker Database.

Image courtesy of William Fischer from the Historical Marker Database.