The state historical marker at this site commemorates the involvement of a woman nicknamed “Aunt Jenny” for her efforts to support freedom for enslaved persons escaping the South via the Underground Railroad between what is now Parkersburg, West Virginia and Belpre, Ohio. Active in the area during the 1840s, Aunt Jenny aided runaway slaves traveling through the area by notifying Underground Railroad agents across the Ohio River of their presence and gathering information on the activities of slave catchers. Historians believe that Aunt Jenny was in actuality Edna Sutton, who after her time in Parkersburg went on to settle in Little Hocking, Ohio. The assistance Sutton provided to refugees from slavery highlights the prominent role played by free black men and women in the activities of the Underground Railroad and the potential influence those activities could have on period politics. In 1845, Sutton’s aid to a group of slaves who were later captured and returned to Virginia from Ohio precipitated a near armed conflict between the two states. This memorial is located in Point Park and is one of only a handful of state historical markers that commemorate the experiences of women and people of color in West Virginia . 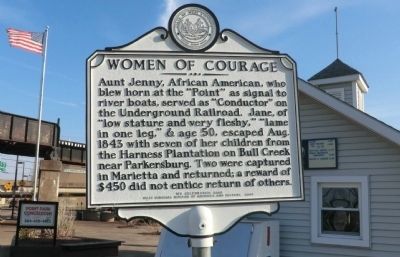 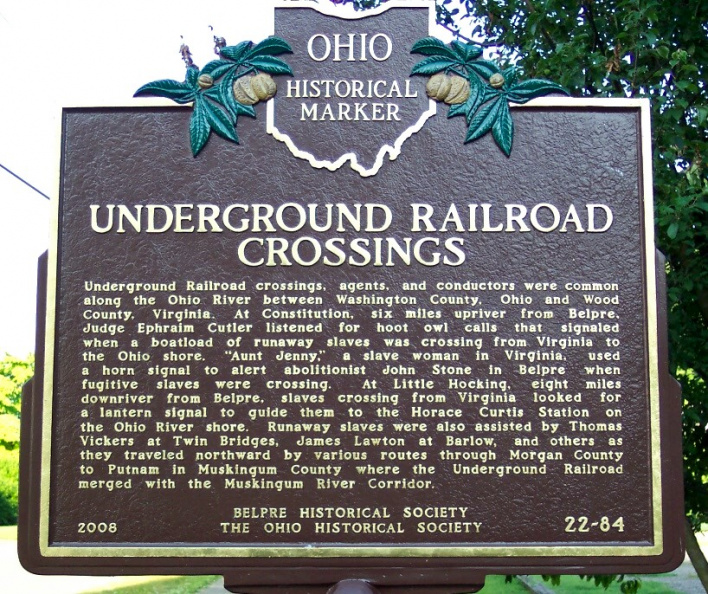 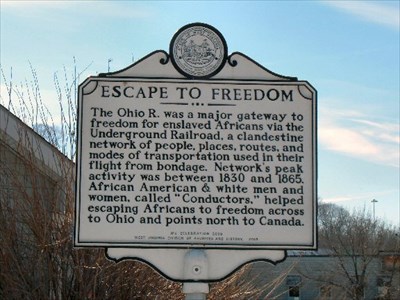 Enslaved persons who traveled north in search of freedom via Parkersburg on the Underground Railroad most likely traveled to the area from points east via two primary routes. The first, the Little Kanawha River, feeds into the Ohio River over a meandering 169-mile course from Upshur County and thus served as an ideal byway for those seeking freedom in the antebellum period. The other, the Staunton-Parkersburg Turnpike, extended nearly 300 miles across the western half of the state of Virginia and was one of the most accessible means of traveling to Ohio in the region. Once they had reached either route, refugees from slavery could either hope to rely on the assistance of a number of Underground Railroad agents and conductors or seek to follow the path themselves. Despite the popular conception that the counties that became West Virginia were heavily anti-slavery, neither option was necessarily a safe one. Many areas of what was then western Virginia relied on the institution of slavery in one capacity or another. Many river towns like Parkersburg, for example, depended on their participation in the slave trade for their prosperity, selling slaves from Virginia to points southward along the Mississippi River. Larger plantations were also not unknown. In what became Parkersburg, for example, one of the earliest families to arrive were the Neals, who established a bustling plantation along the Little Kanawha and Ohio that relied on the labor of a large number of enslaved persons.

On the Neal Plantation was also located a small cabin that housed the individual responsible for warning riverboat captains to avoid the dangerous shoals off The Point, a spit of land on the north side of the confluence of the Little Kanawha and Ohio. That individual would, on foggy nights, blow a horn at regular intervals to prevent boats on the river from running aground. In the 1840s, that individual was Edna Sutton. After the Civil War Edna went on to live in Little Hocking, Ohio, where she disguised herself as “Ed” Sutton to work railroad construction in the town. When the construction moved out of the town, she revealed her true identity and worked as a domestic servant in the employ of one Horace Curtis. As she got older, she worked a variety of odd jobs to survive and was eventually buried after her death around 1878 in Newberry Cemetery.

Before the Civil War, however, Edna Sutton used her role as “horn blower” at The Point to participate heavily in the Underground Railroad. In addition to blowing her horn when heavy fog might threaten the safety of river travel, Sutton blew her horn to notify Colonel John Stone, an abolitionist across the Ohio River in Belpre, Ohio, of the presence of runaway slaves hiding in her cabin on Neal Plantation. Stone would then arrange to ferry the refugees across the river to freedom in Belpre and points further west and north. Sutton, nicknamed “Aunt Jenny” for the purposes of her covert activities, also used the relative freedom of her position as horn blower to move among her white neighbors to gather intelligence. When she learned of the movements and plans of slave-catching posses that might threaten the freedom of runaway slaves in residence across the river in Ohio, she passed that knowledge on to Colonel Stone. Colonel Stone then in turn did his best to aid the slaves’ removal from the area before the posses’ arrival.

One such group that the abolitionists of Belpre were unable to remove from the area in time included six refugees formerly enslaved by George Harwood in Washington Bottom, Wood County: Daniel Partridge, Frederic and Hannah Gay, and the Gays’ three children Burnet, Harriet, and Mary. After being transported across the Ohio with the assistance of Edna Sutton, the former slaves were recaptured (with the exception of Partridge) along with three white Underground Railroad agents (Daniel – or Peter – Garner, Creighton Loraine, and Mordecai Thomas). This group was then forced into Virginia and held in Parkersburg for trial, precipitating a political crisis between Ohio and Virginia. The governor of Ohio, Mordecai Bartley, began plans for 100 Ohio militiamen to storm the jail in Parkersburg in order to free the prisoners but was eventually persuaded to demand the extradition of those Virginians who had participated in the Ohioans’ kidnapping. The governor of Virginia, James McDowell, refused the Bartley’s demand and later exonerated the Virginians in question. The three Underground Railroad agents, meanwhile, each paid $100 in bail and returned to Ohio. They never attended their trial. The role of Edna Sutton in this controversy highlights not only the role of free black women in the Underground Railroad, but also the role of the Railroad in interstate politics in the antebellum period.