Completed in 1759, the Harpswell Meeting House is the oldest structure of its kind in Maine. The Meeting House began its existence as a church and filled that role until 1844 when a new church was built across the road. The building then sat vacant for fifteen years and was nearly demolished before being acquired by the town of Harpswell where it became a town meeting house. Harpswell town offices were located within the former church and it also became a polling place and location for town meetings. Restoration efforts, which began in earnest in 1958, and are once again ongoing through the efforts of the Harpswell Historical Society. The Meeting House, which was designated a National Historic Landmark in 1968, is open Sundays during the summer months and occasionally for religious services.

The Harpswell Meeting House was originally a Congregational church and has sat along State Route 123 since 1759. 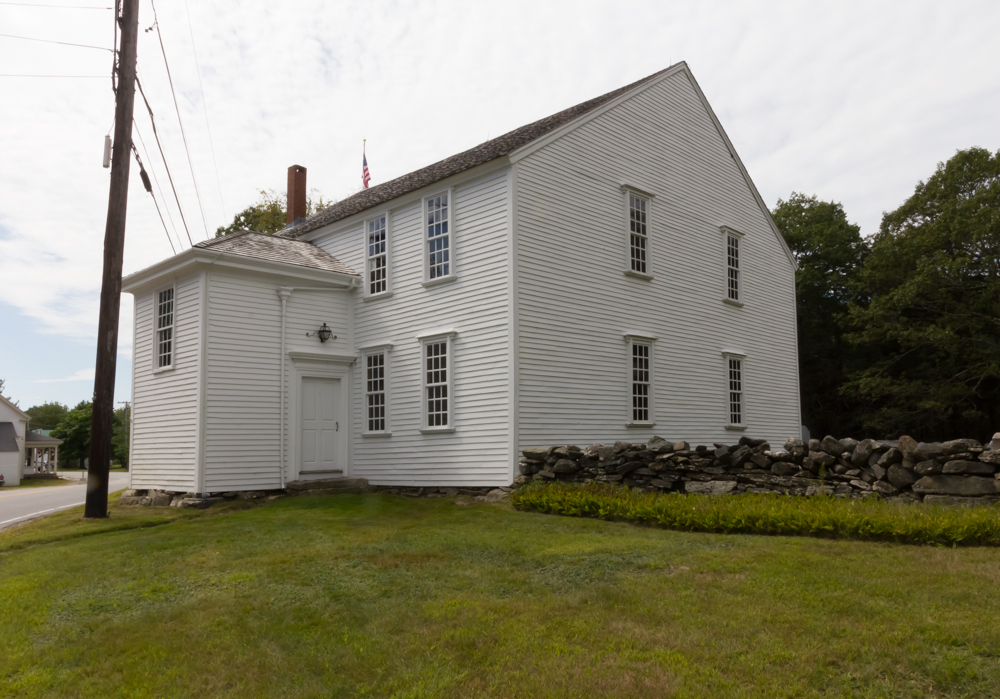 The rear of the Meeting House taken from the vantage of its Old Burying Ground. The Kellogg Church is off to the left. 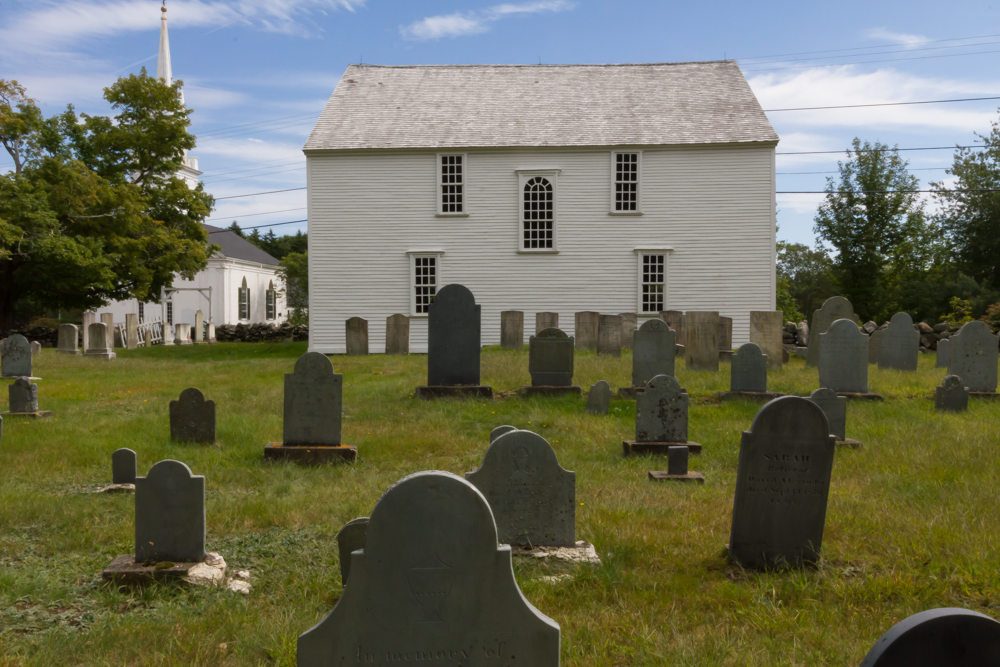 The interior of the Meeting House taken from the rear of the gallery. 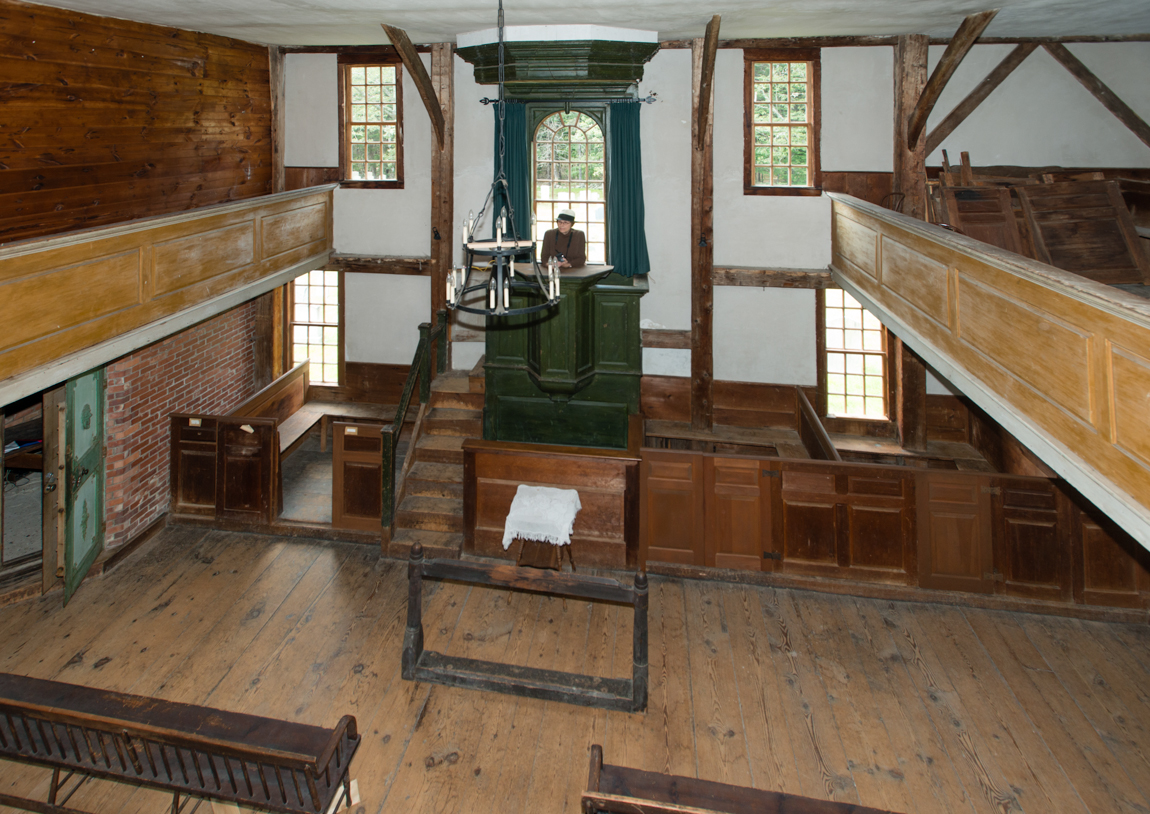 A close up of the raised green pulpit that raises its speaker to nearly the same level as the gallery. 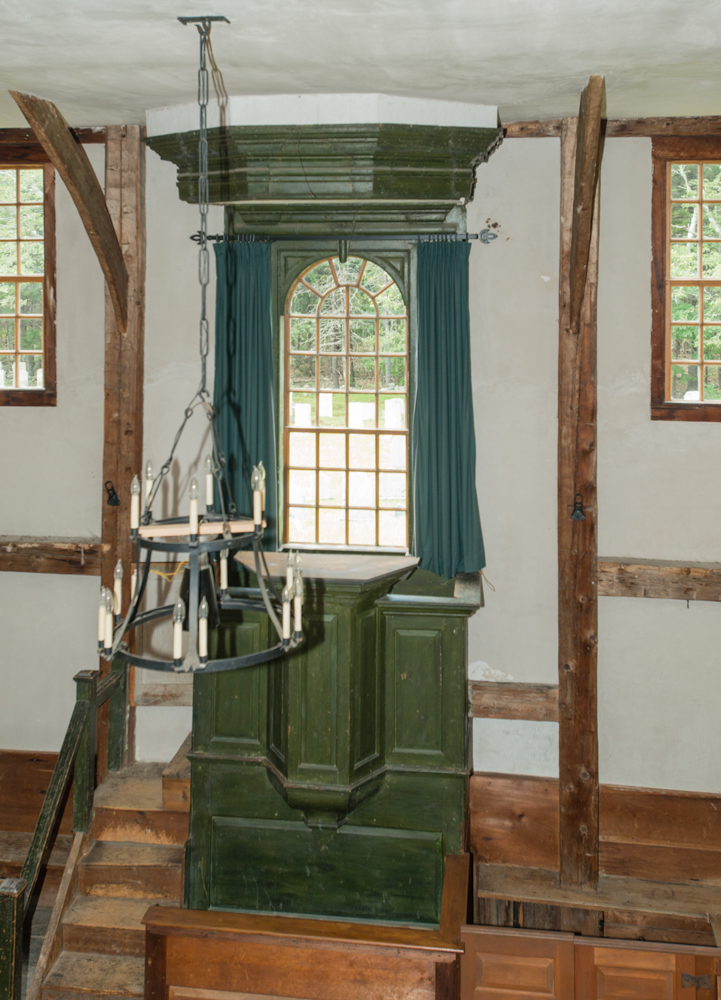 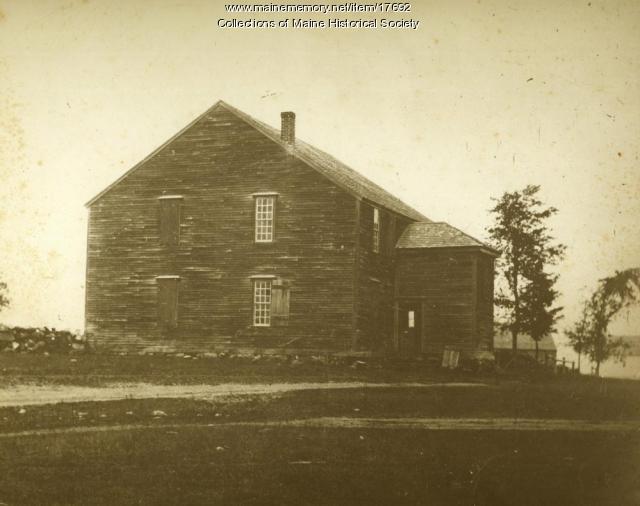 The long, thin peninsulas and islands that now make up the town of Harpswell was, in 1738, part of the parish of Yarmouth. As a result, the people of Harpswell needed to travel sixteen miles by boat across the Broad Sound to attend religious services in Yarmouth every Sunday. In 1740, the community petitioned to establish their own parish. In 1751 the parish of Harpswell was founded with Richard Pateshall, a Harvard graduate, as the parish’s first minister. In 1753, Pateshall was replaced by Elisha Eaton who is largely responsible for getting the parish church built. Construction began in 1757 with the assistance of Reverend Eaton’s son, Elisha Jr., who installed the windows and sashes. The exterior of the church was finally completed in 1759.

The white, wood-frame, rectangular building featured clapboard siding, gable roof, 12 over 12 sash windows, and a small entrance vestibule. As for the interior, it remained uncompleted until 1774, ten years after Reverend Eaton passed in 1764. Once completed, the interior featured box pews, a raised pulpit with sounding board and arch window behind, wooden wainscoting, and steep, split staircase that led to the three-walled gallery.

The Reverend Eaton was succeeded by his son, Samuel, in 1764. Samuel was educated at Harvard and served the community as a doctor and lawyer. It is thought he baptized over 1,100 souls in his church by the time he passed in 1822. His wig and much used baptismal bowl are on display within the Meeting House. Between them, Elisha and Sam Eaton attended to the community’s spiritual needs for 69 years. The parish’s next minister, Elijah Kellogg, requested a larger church be built and that request was honored with what is now known as the Kellogg Church which was built across the road from the original.

The question of what to do with the old church now was raised. In 1842, the parish petitioned the court to sell or dispose of the 1759 church. It then stood vacant for over a decade while a legal battle was fought over its future. The former church was then acquired by the town of Harpswell in 1856 and converted into a meeting house. It was used for various purposes, to include town offices, polling place and community meeting center for over a century.

In 1958, after the town’s bicentennial celebrations, it was decided to devote the excess money to begin restoring the Meeting House. Led by the efforts of Anne Frances Hodgins, the work proceeded slowly as funds arrived slowly. Much of the work was completed by master cabinet maker, John Allen, whose ancestors worshiped at the former church. New window frames and panes were installed as was new interior plaster. During the restoration, a small keg of bullets was located in a blind attic that date back to the War of 1812. The restoration efforts also included the Old Burying Ground which is located just behind the Meeting House and was used until 1900. Both the Reverends Elisha and Sam Eaton are buried within its stone-walled confines.

In 1979, the Meeting House was taken over by the Harpswell Historical Society which continues its restoration. The historical society conducts various special events at the Meeting House, to include an annual reading of the Declaration of Independence every July 4th and opens it to the public Sundays during warm-weather months. They also host religious services in the former church on an occasional basis. Please call or visit the historical society’s website for dates and times of events.