The historic Francis Land House was once surrounded by hundreds of acres of farmland. It served as the home of Francis Land VI, a wealthy plantation owner from a prominent family in Princess Anne County, Virginia. The house is furnished with a mix of period antiques and reproductions to interpret the period that Francis Land VI and his wives and daughters were in residence, circa 1805-1819. Tours of the Francis Land House consider plantation life; the roles of the household members, both free and enslaved; Federal style; and ways that the formation of the new nation affected private lives. Tour guides also discuss the colorful history of the house in the 20th century, when it functioned as the Rose Hall Dress Shop. The City of Virginia Beach purchased the Francis Land House in 1975 and opened it as a historic house museum in 1986. 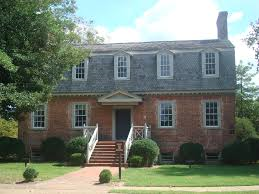 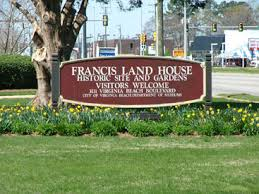 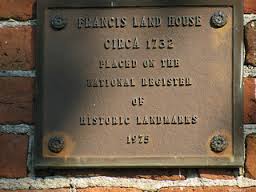 The Francis Land House is an old house from the 19th century located in Virginia Beach. This family-owned property was a brick plantation home, and stayed within the family for 150 years. Six generations of Francis Land lived and worked from this property.

The Land family history on the site spanned the 1630s to the 1850s. The house passed through six males named Francis Land and then the last Francis' daughters before being sold to another family. Slaves were first documented on the site in 1694, with importation of new slaves up to the 1730s. In the mid-18th century the plantation had as many as 20 slaves. The first Francis Land arrived in the area in 1638–1639 and later acquired 1,020 acres (410 ha) of land by 1654, 200 of which was acquired via head rights by bringing four people with him. The plantation got as small as 350 acres (140 ha) over the next 150 years and at the time the current house was built the plantation was just under 700 acres (280 ha). The current house sits on 7 acres (2.8 ha) of that original plantation, and is now in the midst of a very commercialized area.

The house was at one time thought to have been built in 1732, but recent research has placed its construction in the period 1805–1810 by Francis Land VI. Francis VI and his family lived there around 1805–1819, when Francis VI died. When Francis Moseley Land built the house his family had already been living on that land for 150 years. Francis VI and his wife had two daughters, who held onto the land until about 1850–1851, when it was first sold outside their family. The roof was raised 12 inches (300 mm) in 1912. The continued functioning as various types of farms until the 1940s, at which time it was a dairy farm. By the 1950s the area began to have businesses and a major road. During the mid-late 1900s, the house was the Rose Hall Dress Shop.

In the early-mid-1970s a developer wanted to tear down the house and build a shopping mall, but the City of Virginia Beach stepped in purchased the house and land in 1975; subsequently operating it as a historic house museum since 1986. Special programs for schools, Scouts, and the general public are offered throughout the year. Adjacent to the house are the Rose Hall Apartments and Rose Hall Professional Center.

Today, the Francis Land House is remains on Virginia Beach Boulevard. About thirty-five years ago, the City of Virginia Beach took over the property, as the family lineage came to an end. However, the house has been restored and furnished according to 19th century décor. In 1986, the property was reworked into a museum.  At the Francis Land House, children can learn about the Land family and how they made a living, as well as their own food and clothing. Inside, guests can enjoy seeing an antique house that is representative of Virginia in the 1800s, as well as a house that demonstrates the prominence of the Land family. The house features period rooms, exhibits and a store. Outside of the house are trees, gardens and a wooded wetland trail. A 1912 renovation raised the roof 12 inches. Other changes include a new walkway and a period vegetable garden, containing asparagus bud, flax garden and an herb garden.

There is a spinning wheel demonstration included in school tours. In addition to these exhibits, the museum home also has restrooms and parking. Special events are organized throughout the year as well as guided tours. Special programs for young students include “Then and Now”, “Once Upon Another Time”, “People of the Past”, “Mr. Land's Plantation”, “Life in Revolutionary Virginia”, “Outreach Programs for In-Class Presentation”, and a “A Trip Through Time.” Each of these courses is specially made for elementary school grades, from Kindergarten to 5th Grade. Please note that the Francis Land House is closed on Mondays and on holidays.

Tours are given hourly on the half hour. Tuesday- Saturday 10am to 4pm Sunday noon to 4pm Closed Mondays