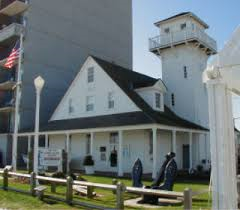 The Offical Historical Landmark Plaque for the Station 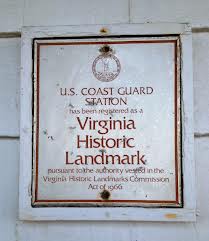 Signage featuring the hours of the museum and gift shop 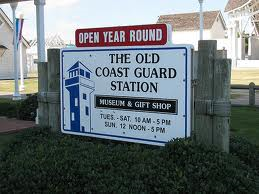 The history of the United States Coast Guard began with the creation of the Revenue Cutter Service. In 1790, Secretary of the Treasury Alexander Hamilton ordered the construction of ten cutters to receive custom duties from foreign ships visiting the nation's ports. The customs duties collected by the cutters provided 92% of the U.S.'s revenue. Over time, the responsibilities of the Revenue Cutter Service expanded to include protecting the country during times of national security and was placed under the control of the U.S. Navy.

The United States Life-Saving Service was created under the Department of the Treasury. Intended to aid in the preservation of life and property of vessels shipwrecked off the coast, the idea for the Service was initially conceived in 1854. The outbreak of the Civil War, however, delayed its formation until 1871. Owing to the growing number of Service stations the USLSS would go on to became a separate agency in 1878. Most of the individuals involved in the rescue of shipwrecked persons were unpaid volunteers. Over its 44-year history, the USLSS assisted 28,121 ships and saved 178,741 lives.

In 1878, Congress passed a law that joined the Revenue Cutter Service and U.S. Life-Saving Service to provide assistance to persons that had been shipwrecked. By 1889, there were 265 life-saving stations across the U.S. Typically, these stations were most active between October and March. The Keeper was in charge of the quarter and Surfmen, and the Surfmen patrolled the beach and maintained a watch for vessels in distress. These patrols were conducted 24/7 during the active season. Most of these facilities were equipped with a surfboat, apparatus cart, Lyle gun, and Breeches Buoy.

Virginia Beach, located along the unforgiving North Atlantic coast, had five such stations: Cape Henry, Seatack, Dam Neck, Little Island, and False Cape. The earliest of these was constructed in 1878, later replaced by the Seatack in 1903. Seatack is particularly notable for the rescue of the Jennie Hall and the Norwegian ship Diktator. Despite terrible conditions, the Surfmen at the Seatack managed to save many of her crew and passengers. A 1962 replica figurehead and plague approximately 100 yards north of the station commemorates those who perished during the wreck of the Diktator.

Today, the Seatack is a recognized state and national historic site. The former Life-Saving Station (now the Old Coast Guard Station Museum) houses a collection of 1,800 artifacts, over 1,000 photographic images, and a research library. The Museum seeks to preserve and honor the memory of Virginia Beach's coastal heritage. Many collections throughout the Museum focus on the history of the Coast Guard and the individuals who served. It also continues to exhibit and tag 19th century shipwrecks. This includes collecting timber and other materials that wash ashore after large storms, researching the possible source, and archiving these materials for further study. The Museum's photographs cover the history of the Coast Guard, as well as the history of Virginia Beach itself. The photographs will soon be digitized and available for online research.

The central exhibit in the Museum concerns the 1903 Lifesaving Station. In 1915, The United States Life-Saving Service became the United States Coast Guard. The Lifesaving Station was decommissioned by the Coast Guard in 1969. The building sat unused for a decade when it was finally slated for demolition. The residents of Virginia Beach, realizing the historical significance of the Station—including the effect it had on the growth of the city—rallied together to have the Station turned into a maritime museum; in 1979, the Old Coast Guard Service Station Museum opened.

Significant research is still done at this location. In addition to shipwreck identification, the Museum also houses a library of over 650 books. Their archives feature titles encompassing much of maritime and naval history. In addition to books, there is also a large video and audio archive, used to create exhibits on various individuals in the Coast Guard. If the materials you are looking for are not available on exhibit, it is possible to contact the museum for special access.