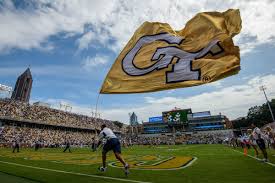 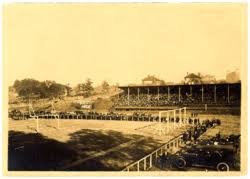 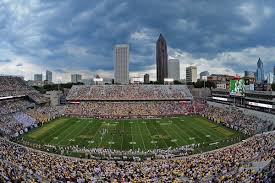 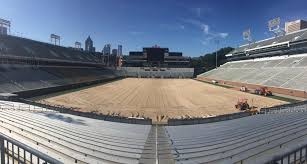 Georgia Tech’s football facility was known as Grant Field until April of 1988, when the Georgia State Board of Regents voted to add the name Bobby Dodd Stadium in honor of the legendary coach who guided the Rambling Wreck to its most illustrious football era. A member of the National Football Foundation College Football Hall of Fame, Dodd compiled a 165-64-8 record from 1945-66, and tutored 21 all-Americas as he led Tech to 13 bowl trips during his 22-year stay as head coach. Dodd served as Tech’s director of athletics from 1951-76 and then worked as a consultant for the alumni association until his death in 1988 for a 57-year association with the Institute. Built at a cost of $15,000, the stadium had a capacity of 5,600 located today on what would be the west side.

The first of several additions came in 1924 and 1925 when stands on the east and south sides were constructed increasing the capacity to 30,000. By the 1947 season, the original west stands were rebuilt with a press box pushing the capacity to 40,000. The north stands were built in 1958, a second deck was constructed in 1962 on the east side and by 1967 the west side was built, boosting the seating capacity to 58,121.In 1971, Georgia Tech decided to replace the grass field with AstroTurf. Throughout the 1980s, fans attending games at the stadium saw several changes. In 1982, new scoreboards were installed and the stands on the south side were demolished in 1985, replaced with the Wardlow Center that houses the athletic department. The demolition of the south stands reduced the seating capacity to 46,000. In April of 1988, Georgia Tech honored former football coach, Bobby Dodd, by renaming Grant Field, Bobby Dodd Stadium. In the 1990s, 32 new suites and a press box were built and the AstroTurf was removed and replaced with natural grass. Perhaps the biggest and most expansive renovation to Bobby Dodd Stadium came prior to the 2003 season. Georgia Tech decided to renovate and expand the stadium to seat 55,000 at a cost of $75 million. The largest crowd to see a game in the current configuration was at the 2006 season opener, when Tech hosted second-ranked Notre Dame before a crowd of 56,680.